When I rebuilt the galley and saloon on Wand'ring Bark last winter there was one corner I left untouched due to a lack of time and also a lack of inspiration about what to do with it.

The area I am referring to the the front left corner opposite the stove, which is currently a cupboard with an unused CD / radio inside plus various electrical sockets and a draw underneath. With the advent of the i-pod and digital radio the stereo is now redundant. 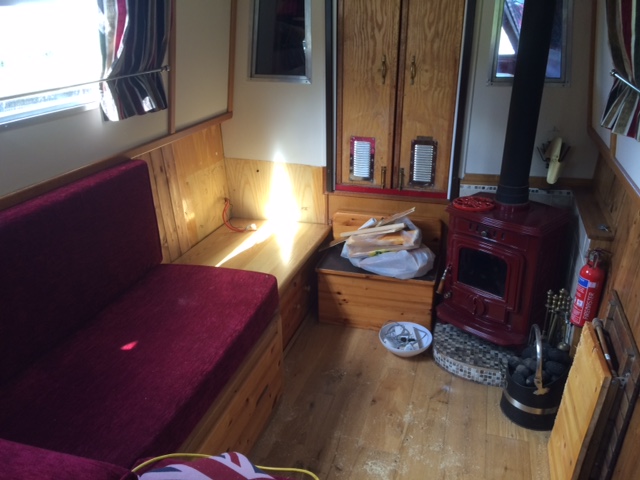 When I made the new L shaped sofa to replace the two parallel benches I kind of promised Helen something comfortable but our short time aboard this year highlighted a design flaw. We both like to sit with our legs up and when Helen has bagged the length of the settee there is nowhere for me to sit!

With the DVD player now being sited opposite the settee (not on the stereo cupboard) I came to realise that I could remove the cupboard and replace it with a table / seat base in effect making a 9ft bench seat on which Helen can sit and one end and I can sit at the other with out toes getting intimate in the middle.

And so three planks of oak were purchased, joined, moulded and varnished to make the table top / seat base and the old unit reworked to support it. Of course, reworking is never that simple and it took a good two hours of persistent unscrewing to get the unit free and then to trim it down to size.

Patience paid off and eventually the base was prepared for the new top which, after a bit of fettling, will be glued into position and the trimmings made good. Then there is the small matter of a new cushion form Elite Furnishings and we will both be sitting pretty!
Posted by Andy Tidy at 8:18 pm No comments:

The Cider Press in action
September 2016

Over the years I have used my old trolley jack to press surplus apples into cider, but I was never really satisfied with my Heath Robinson contraption. Not only was it ungainly, it was also inefficient. 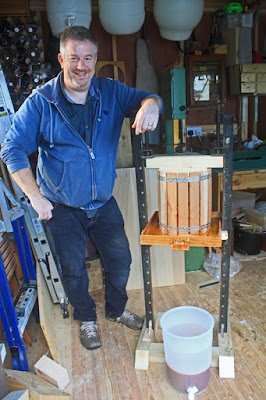 Jon with the new cider press

With a bit more time on my hands I invested the princely sum of £4 in some oak battens and recycled lots of bits and bobs from around the shed, including two donated sash cramps, into what appeared to be a workable apple press.

To accompany this bit of the cider making process I also prepared cheap and effective "scratter" to smash the apples into squeezable lumps, but stops short of liquidising them, which is also ineffective. There are many very dangerous looking DIY scratters on the YouTube, so I opted for a safer plasterers whisk with a sharpened blade which was about 80% as effective as a commercial unit and a fraction of the cost. 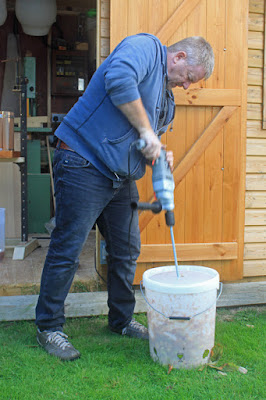 Scratting the apples with a plasterers whisk

With autumn upon us and windfall apples being offered in abundance it seemed a good opportunity to christen the kit, so my friend and fellow home brew enthusiast Jon came round for a couple of hours and we set to work on the bags of over ripe apples in the shed. 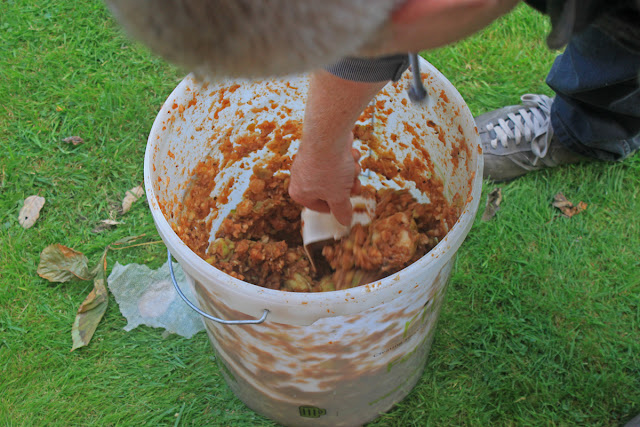 I should hasten to add that the lovely cider apples provided by Sue and Richard (Indigo Dreamers) and featured in this post were not used in this pressing. They are ripening up and will be processed in a few weeks when they have softened up a  bit more. For this pressing the apples we a mix of Emery and Wolferson Bramleys plus some softening cookers scrumped from Pelsall Common and some from my brother's orchard. 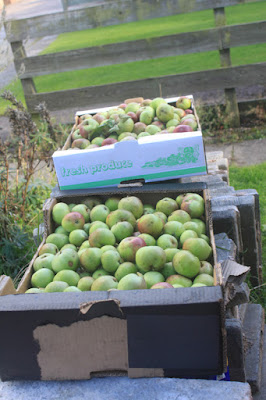 Apples awaiting the next pressing

The scratting in a beer vat half filled with apples was remarkably successful. We used the plasterers whisk attachment through a hole in the lid to minimise the splatter and after five minutes of churning up and down the apples had been reduced to smallish chunks.

The next stage was to load the pulp into the new press. Each pressing comprised four layers of apple, each wrapped in muslin and separated by wooden slats to let the juice escape. We found that half a vat of scratted apples fitted nicely into the press. 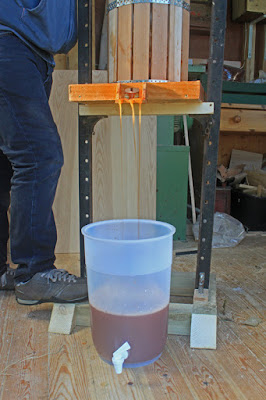 Then the press was engaged by screwing down both sash cramps and the juice poured out in a torrent. The pressure was enough to force juice through the side slats to it appeared to "cry", but the basket held as the top was screwed down. When the cramps were fully extended we added a wooden block to let us press further and by the time the pulp had compressed to about 40% of its original volume the flow slowed and the nearly dry apple crumb was removed. 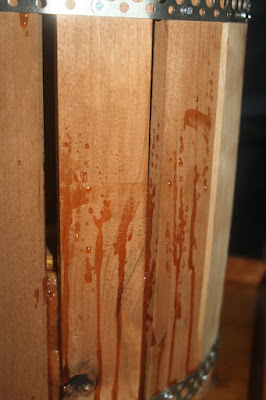 This pressing process was repeated four times and we produced about 13 litres of apple juice. This was decanted into demijohns and left to ferment with an airlock inserted.

In the past I have had to use brewers yeast to start off apples picked straight from the tree but have found that if windfall apples are used the natural wild yeasts are introduced on their skins and it should ferment all by itself. 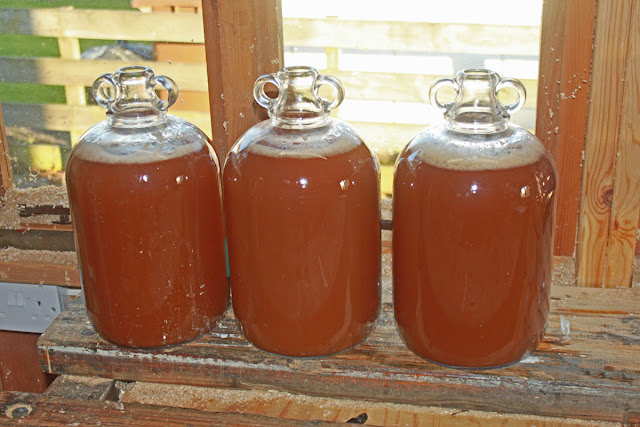 We were delighted with the effectiveness of the kit, messing around like a pair of schoolboys as the amber nectar flowed from the press. Time will tell if the fermentation kicks by itself, or if the resulting cider is any good. Past results were very positive so we are hopeful. Not that we will be drinking it anytime soon - the juice needs to ferment out, be bottled with a teaspoon on sugar (to make it sparkling) and then left to mature over the winter. Then, in the spring the temperature will rise and as it reaches 15C a secondary fermentation will take place altering the acids.

So we wont taste the results of our labours till next summer - time for a party!

The Black Country seems to specialise in great place names : Lower Gornal, New Invention or Black Delph. But there is one which is especially lovely: Bumblehole. 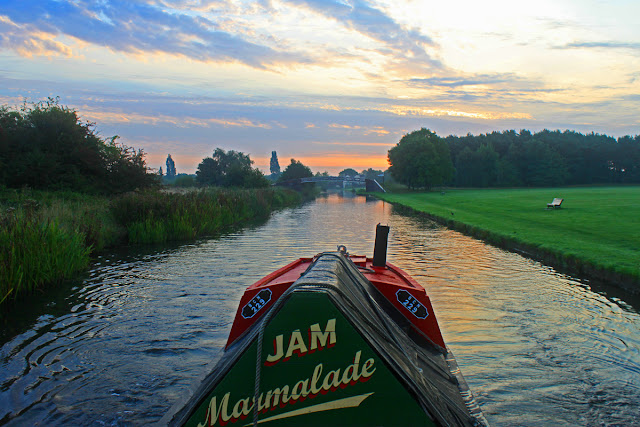 Now I do appreciate that there is a Bumblehole on the Staffs and Worcester, but the one I am thinking of is at Windmill End (another place name to savour) which is in a country park near Netherton at the western end of the Netherton Tunnel. Bumblehole inspires images of bees buzzing to and from heads of honeysuckle of a balmy summers day. In truth its a huge local nature reserve which has grown up over an industrial site which was of epic proportions.

The decades have softened the shattered landscape and even the brutally named Dudley Number Two Canal has mellowed as it weaves its way through the site, along with its numerous canal arms and loading basins. The end result is something a bit special, with the eastern horizon framed by Portway Hill and the gaunt remains of Cobbs Mill, with its leaning chimney.

OK, so that's enough of me going all misty eyed about the site! It also hosts the amazing annual Black Counter Boating Festival on the first weekend in September, this time celebrating 31 consecutive years. We are relative newcomers but this September was our fifth as a trade boat, always occupying the same spot just outside the visitor centre. Over that time our offering has grown from a tentative table on the back of Wand'ring Bark to the more extensive Jam Butty, but this year was a bit different. Whilst the boats and the produce were the same, this year I traded without Helen who was at home cared for by her mother as the comes to an end of a course of chemotherapy. Instead, I was accompanied and supported by my friend Dave, who whilst he has Helen's height, lacks her legs!

The limitations of the Chemo has meant that our travels have been much curtailed and we limited our trading to the few events we could reach from our Aldridge base, and which also fitted in with her relatively "good" weeks in the treatment cycle. This limited schedule has seen the boats limited to the BCN and have been just enough to turn the stock over and replenish it ready for next year when we will have another bash at reaching London.

Attending the festival meant nearly a week out on the boats and the outward journey was achieved in a serene manner, spending the first night at Pelsall Commen which we left at first light on the Thursday. Towing the butty does slow us down a bit but we reached Horsleyfields Junction six hours later and then arrived at the festival site after another four hours cruising, including a detour via The Brades as Factory Locks were being repaired.

The festival saw persistent drizzle on the Saturday which dampened attendance, but such is our loyal clientele our takings were average for a festival day, even if they were only 50% of last years record breaking tally, which was achieved with a full spread of stock in glorious sunshine. 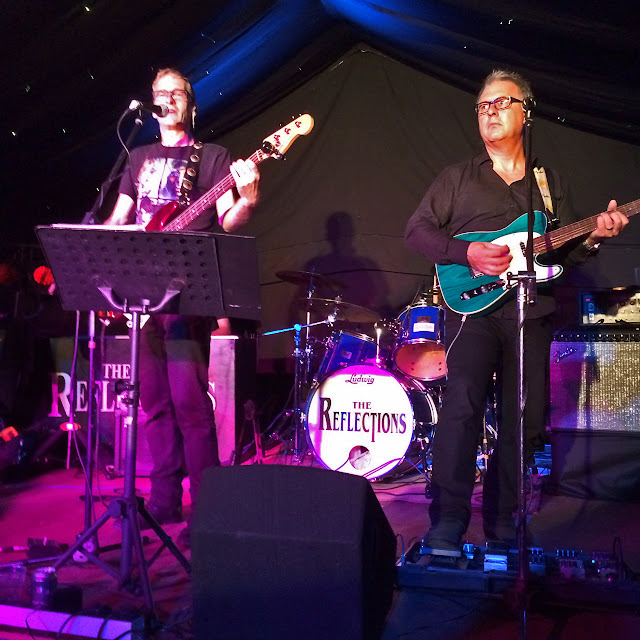 Saturday night is usually spent in the Beer Tent and this year the main band were The Reflections, a hugely engaging cover band which we (the Roving Traders) have met elsewhere and love. They play an up tempo set of material from the 1960's to the 1990's with bags of enthusiasm and great skill. Their material begs to be danced to and it was great to see just about all the traders up and bopping for the second set. 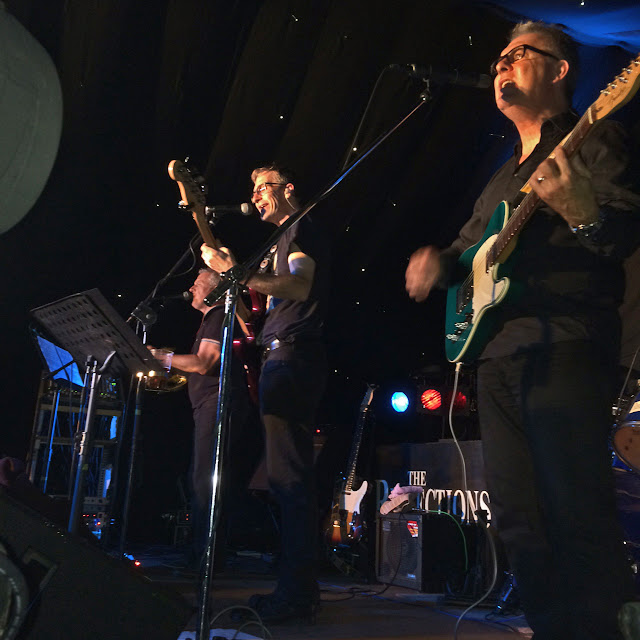 Sunday was clear and bright, making up for the dull Saturday. The crowds flocked in and trade was brisk, keeping Dave and myself busy replenishing the stall and swapping jars of preserves for tenners! The day was a blur of familiar faces but being without Helen meant I had very little time to chat - sorry if I didn't give you a lot of time! 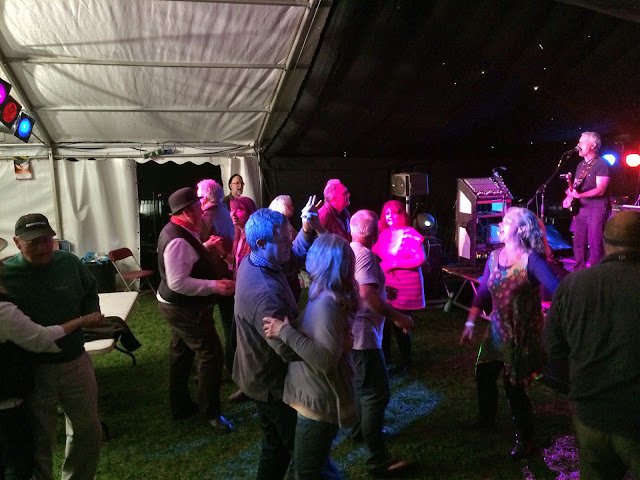 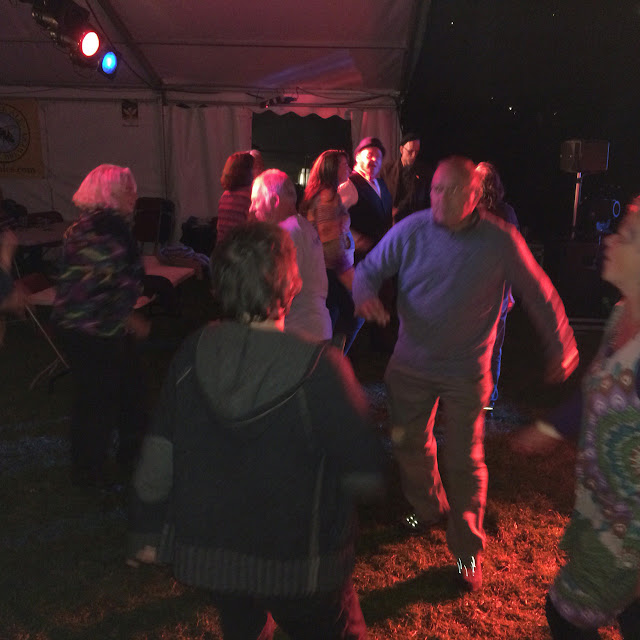 The Roving Traders strut their stuff

And so dawn broke on Monday morning to see us winding the boats in the Bumblehole Arm and setting out for the Wyrley and Essington Canal, with the Cheese Boat hard on our heels through Netherton Tunnel. Our objective was to reach Pelsall but along the way we paused in Wednesbury where we had seen some Damson trees on the offside which gave us 9 kilos in about 20 minutes - enough for several batches of Damson Chutney and the ever popular Damson, Ginger and Tea Jam. 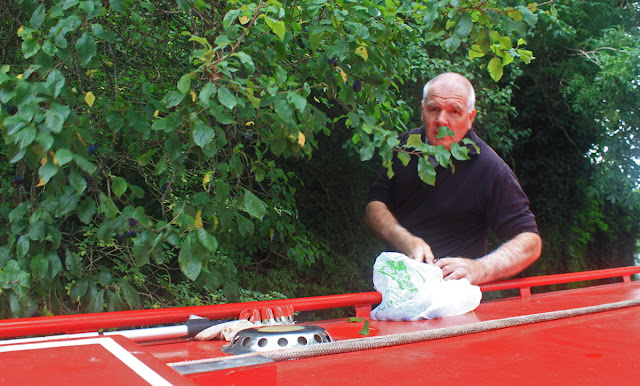 Dave helps with the foraging

Our only hiccup along the way was the acquisition of a nylon carpet on the prop in Harden. Its a situation we dread but I am glad to say its becoming much rarer. In the event it wasn't too badly wound on and a serrated knife saw it released within 15 minutes. The muddy fabric was hauled onto the bows of the butty and duly deposited in the skip at Sneyd. 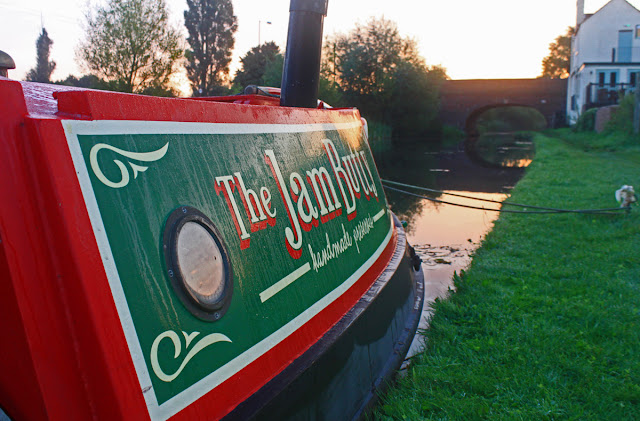 As usual, we had the 30 miles of the W&E to ourselves and we navigated that  final fours hours home from Pelsall under a roasting sun, spotting fish flitting in and out of the weeds beneath us.

I guess my thanks go to my mother in law for looking after Helen and Dave for offering help, support and endless cups of tea. Without the pair of them the trip would never have been possible.