The danger of not doing your research properly
June 2015

Some of you may recall an infamous blog post about a hitherto forgotten canal tunnel under Dudley Tunnel posted in early April 2013.

The item caused some amusement in the Birmingham Boating circles and there it has rested ever since - till yesterday.

Reports trickled in that accounts of wartime oil extraction under Dudley Tunnel had been unearthed and published in the Daily Mail, and the Chair of the BCNS was asked to comment. Fortunately Charley was familiar with my slightly strange sense of humour and was able to point the Daily Mail in the direction of the clues embedded in my blog post - see link.

Have look at the article and my original post! If its in the papers it must be true.....
Posted by Andy Tidy at 9:43 pm 2 comments:

We are trading at two festivals over successive weekends and as I type this account of the Longwood Festival the lyrics of "We're the kids in America" playing in the Norton Brewery next door mix with the distant beat of The Stones floating up from the stage opposite Big Lock. Yup, we are at Middlewich Folk and Boating (FAB) Festival, and what a contrast. 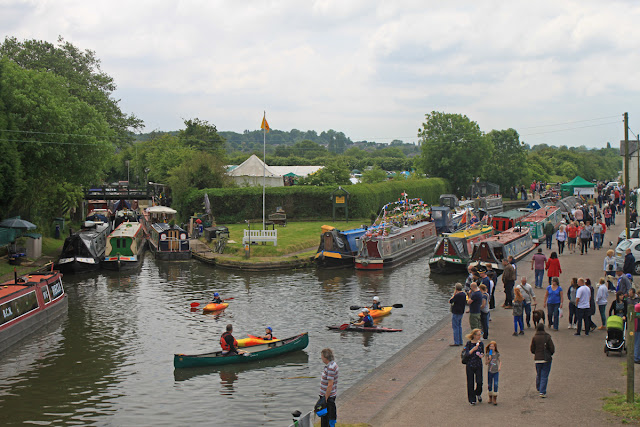 Middlewich is a huge, heaving music based festival attracting thousands to the town with its main stage and its many fringe stages which occupy every nook and cranny.

By contrast Longwood Boat Festival was a very homespun affair based around the small Longwood Boat Club which occupies the arm at the top of the Rushall Locks and numbers no more than 30 boats. There is not usually a lot of action out on the northern reaches of the BCN but every other year a festival takes place at Pelsall Common which serves the joint interests of the local boating community and the local population. 2015 was scheduled to be an "on" year but unfortunately the festival infrastructure has been allocated to the 200 year celebration of the Worcester Birmingham Canal, so Longwood Boat Club stepped up to the plate and decided to run their own gathering, the first time such an event has run for 13 years. 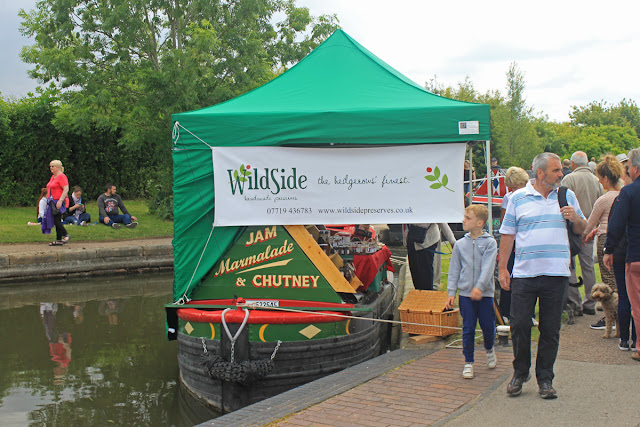 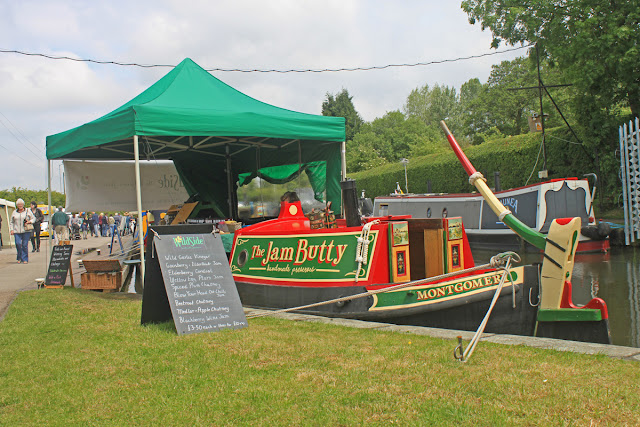 The Jam Butty in full sail at Longwood Boat gathering 2015

The Cotswold Cruising Club were touring the BCN with about a dozen boats and attended the event en mass, swelling the number of boats to about 35 and adding significantly to the vitality of the proceedings.

The field next to the club was leased, land based stall holders were invited, along with various attractions like vintage cars, a dog show, a canoe club and all was set fair - till the weather intervened. You cant predict the weather in a UK summer and the Saturday dawned dark and wet and a big blob of rain sat over Walsall all day and it rained unremittingly. 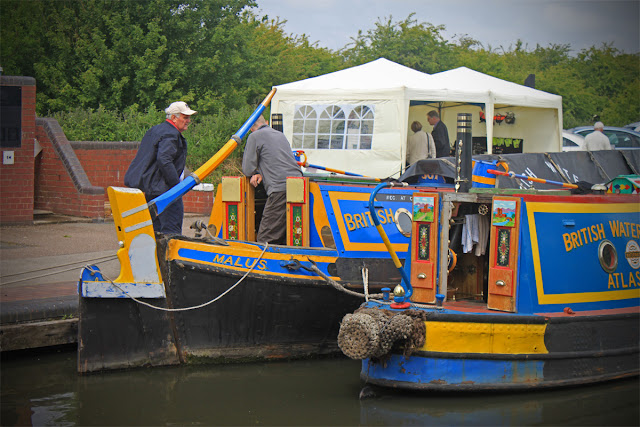 Atlas and Malus on dispaly

At any other event we would have thrown on the towel and just turned up on the Sunday but this is our home club and they had kindly given the Jam Butty the prime spot on the lock wing wall outside the club house. We had erected the gazebo over the boat on the Friday so decided to press on and play our part in giving the attendees something to see. And so we spent the day with the stall shrouded three sides looking something like a building under repair - but better that than no trade. Business wasn't exactly brisk but the final tally was as good as it gets by wet day standards. I cant say if this was a sympathy vote or just because we had a captive market as they ducked in out of the rain! 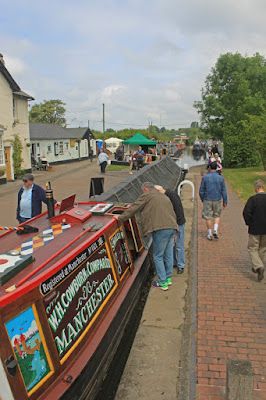 Swallow moored in the lock

By contrast Sunday was clear and fair and the residents of Aldridge flocked onto the site and the event heaved, redressing the balance from Saturday. The high point for me was the duck race.... This can be attributed to our position which afforded me a ducks eye view of the race with the little plastic creatures propelled by a mix of the raffle ticket sails on their backs and the flow into the lock. 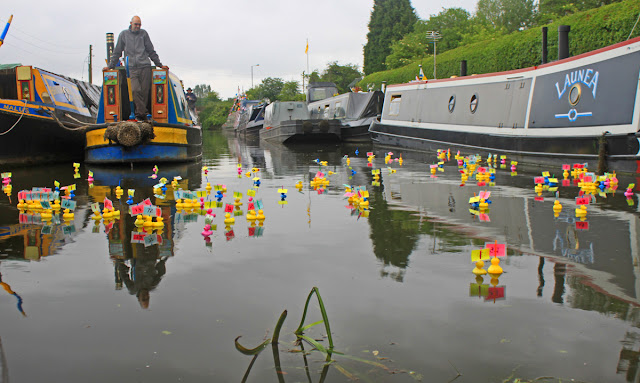 It was also great to spend time with the local and visiting boaters who gathered each evening in the beer / entertainment tent. The entertainment was home grown and familiar, which all added to a distinctly chilled vibe. I was particularly pleased to spend time with Ivor who has a soft spot for The Jam Butty and spent an hour or so explaining the practicalities of horse boating which he had picked up from Chocolate Charlie. It all fascinating stuff and the evening ended with Ivor donating some self created decorative rope work which is now part of the Butty's best dress on show days. 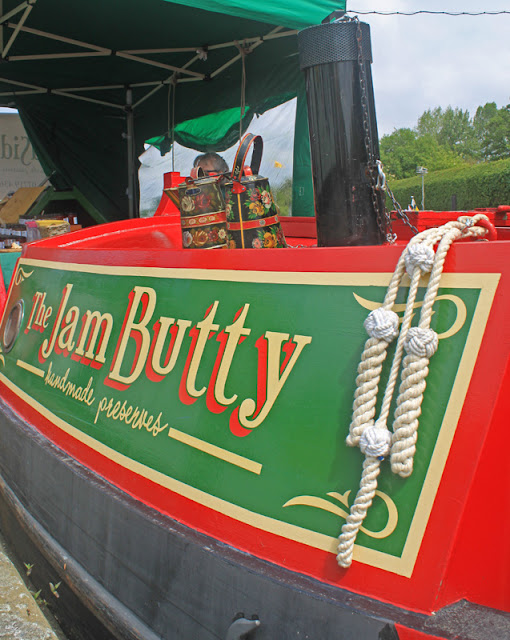 The event ended with a two hour run to Brownhills, ready for a big push on to the Shropshire Union and a four day journey to Middlewich.

The event may have been small, but it was perfectly formed and provided a memorable event which even the worst of the weather could not spoil.

Blueprint for the bows

Ideas from the ether
June 2015


I had an interesting visitor last night.

We had just tied up at the Middlewich FEB festival traders area when along came Mick from the Lollipop Boat with a sheaf of papers in his hand. We had met Mick last summer in Birmingham and discovered that he had fabricated the front deck of the Jam Butty and he came bearing the photos he had been given to use as a guide in its construction.

There was me thinking it was just something which had been knocked up as part of the build project, but there was much more to it than that.

My brief to Keith has been "keep it traditional, but functional". And that is exactly what he strove to deliver. Keith Ball had given Mick a few photos of outer front decks and asked to "do something similar". Its interesting to see where the inspiration was drawn from and the end result is indeed both functional and pleasing to look at. What is more we have discovered that sitting out on the warm front deck on a balmy summer evening with a G&T in hand is just about perfect! 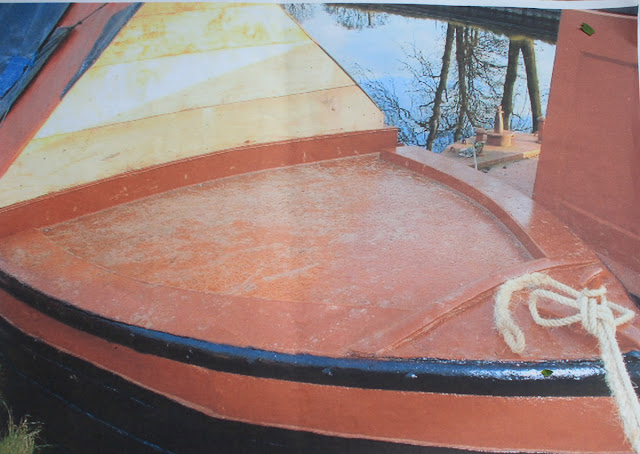 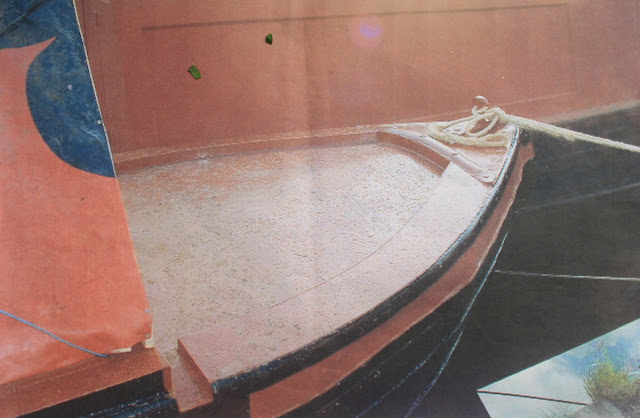 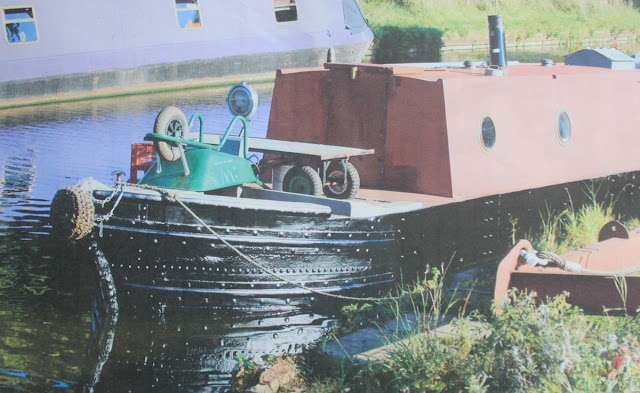 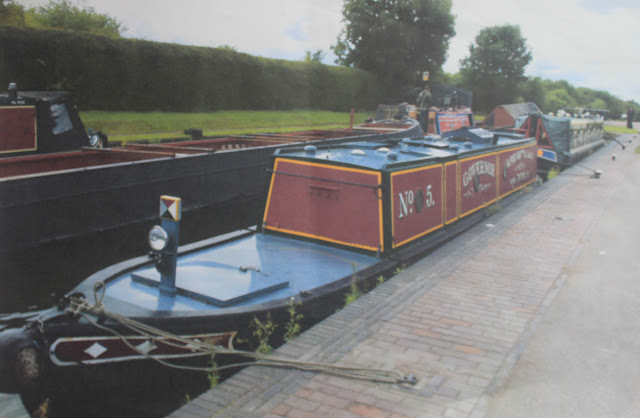 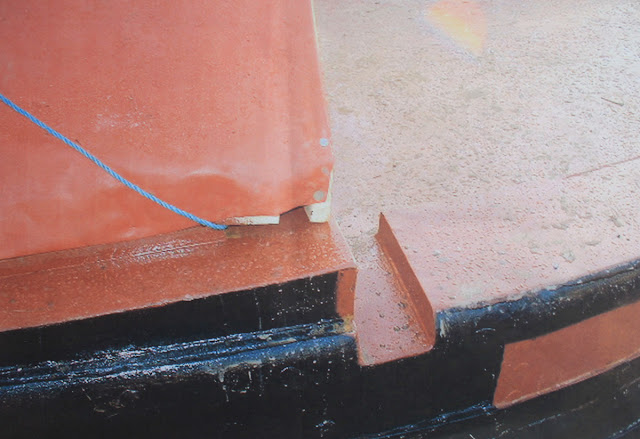 I post a number of the images to serve as a reminder of there the front deck had its origins.

Seeking out the Floating voter

The C&RT Council is holding a fresh round of elections this winter and are looking for 9 seats to be filled.

You may remember that I stood as an independent boating candidate last time round, but lost out when the IWA waded in with their candidates and mopped up all the available boater seats.

I am not proposing to repeat that experience, but I have noticed that there are two boating business seats coming available and I am planning to stand for one of these.

Last time the  Boating Business seats were filled by representatives of the boating industry but since the last elections the Roving Trader class of business license has been created. There are now several hundred boat based small business out there, plying their trade wherever they can.

This peripatetic group of boaters have particular needs and it seems right and proper that they have  voice at the Council, if at all possible.

One snag is that the campaigning season does not start properly till October, by which time most of the traders will have moored up for the winter. Its therefore important that the word is spread during the busy trading season.

I will be issuing a flyer and manifesto in due course, but if you hold a business license please consider giving me your vote in November and if you know / meet any Roving Traders please spread the word and where possible endorse me as a credible and reliable candidate.

Unusually, a contribution from Mrs Ahab:

So much fun should probably be illegal!
Just spent a fabulous evening at one of the Cellar Door's Gin Masterclasses, based in their shop / tasting room in Clarence Road, Four Oaks, just north of Sutton Coldfield.  Simon hosted and welcomed us with a large G&T with dried hibiscus added which gave a delightfully intensifying pink colour with a hint of flavour.  While we enjoyed these drinks he gave a short talk about gin, it's origins, it's manufacture and it's current state of popularity.  We passed round botanicals, listened to descriptions of Hogarth's 'Gin Lane', learnt of the origin of 'Dutch courage' and nodded wisely while Simon narrated some of gin's colourful history. 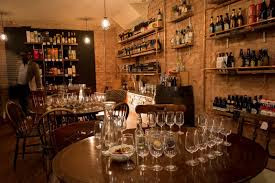 Before we got seriously into the gin, we began with tasting tonic waters.  Comparing Schwepps with 1724 was a revelation - I cannot imagine going back to cheap tonic full of aspartame and sugar (yup, both, check the labels).  And then the main event arrived - the gins!  We each had a menu of the gins we would be tasting and gradually worked our way down a list of about 6, beginning at the cheaper end and working up in both quality & price.  However, it was interesting to see how people's tastes varied.  Inevitably, the most expensive was simply exquisite, but that said, I also particularly favoured the cheapest alternative.  Each gin was carefully described by Simon and he advised how best to taste it, to serve it and in some instances what cocktails to mix with it.  As a small break in the proceedings Simon expertly mixed a Gimlet for us and gave out recipes for other cocktails too.  Many of the gins were sent round with botanicals to add, each depending on the predominate flavours.  For one it would be rose petals, another liquorice root and still another apple slices. 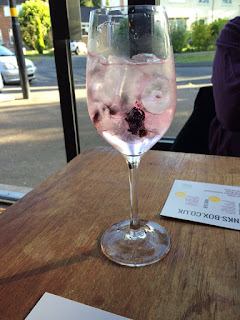 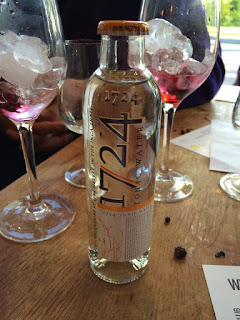 At the end of the evening we had the opportunity to taste yet more gins by buying G&Ts - this time in large measures and beautifully presented too.  I chose an Elderflower Gin while the Captain stuck to Monkey 47.  And of course, we were able to buy bottles of any gin we fancied.  This was not compulsory but rather something we delighted in doing at the end of a fascinating evening.
All in all, I can thoroughly recommend this event - well worth the time :)

Captains note:
As I write this the following morning there is an inexplicable dull ache in my head, but I havn't figured out its origins yet. 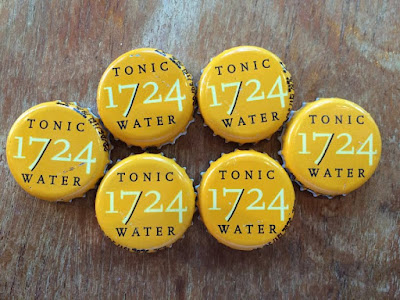 As with beer festivals, careful notes were taken as drinks were sampled, but after six or so they all started to blur together. No matter, Helen has her notes, doesn't she. Oh dear - apparently not as they were left on the table as we departed ;-(. Back to square one.

On a technical note I was fascinated to learn that Gin starts out as a clear and flavourless alcohol (vodka) and the only criteria which defines it is as Gin is "predominant flavouring with Juniper". What you add beyond the Juniper is entirely to taste which opens the door to endless interpretation and experimentation.
The other technical point which interested me was that the "Dry" bit of Gin relates to when the flavourings are added. If you add them to the alcohol before distillation its "dry" and if they are added after its not.

As a bit of a brewer these things interest me..... Now where do we keep the paracetamol in our new house....?
Posted by Andy Tidy at 9:57 am No comments: