After passing Deptmore Lock we passed over a causeway which appeared to divide two parts of a huge lake. 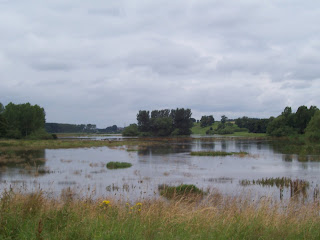 The swollen Penk now stretched from one side of the valley to the other, covering the entire flood plain and was nearly on a level with the canal. The Sow valley was little better, with flood waters reaching the top of the aqueduct arch. A couple of feet more and the waters would have overtopped the banks. Brindley made a good job of the aqueduct - the pressure on the structure must have been immense. 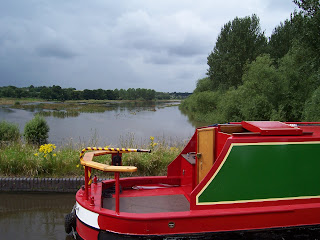 We had a steady run up the unspectacular section Trent and Mersey to Stone, mooring just below bridge 96 at the top of the flight. We noticed Phyllis May moored up in the basin above the Star, all encrusted with salt and recently returned from her American exploits on the Intracoastal Waterway. We went looking for the Rising Sun, but never found it. Instead we walked back to the Star, which failed to live up to its promise with crumples and sticky menus putting us off their food.
We then wandered into the market square and ended up in Wetherspoons which, whilst lacking in atmosphere, did deliver exactly what we expected. During our meal we kept seeing ariel photos of the flooded Severn and Avon - the exact place we have been planning to visit! We made the right decision to head for the Caldon.
Posted by Andy Tidy at 1:46 pm