Index to this series of posts:
1. - Autherley to Angelsey Basin (Brownhills) - this post
2. - Brownhills to Tipton
3. - Tipton to Autherley

Before I start, I had better come clean - I am a fan of the Birmingham Canal Navigations, which is a bit of a mouthful so I will refer to them as the BCN.

I have to acknowledge that the tangle of canals that weave their way in and out of my adopted city are something of an acquired taste. Like Marmite, they elicit strong views – you are either passionate about them or you avoid them like the plague.

However, you only seem to hear of horror stories involving excessive weed, mud, clogged propellers and an ever-present undercurrent of physical danger from the local youth. One rarely hears about the unexpected beauty and unique sites of historical interest that can be found on the 110 miles of waterway that make up a virtually self-contained canal system.

As I live in the midst of this labyrinth of remaindered waterways, and catch fleeting glimpses of remote canals as I drive around the city every day, I felt compelled to bring my newly acquired narrowboat, Wand'ring Bark into the system and find out how all the bits join together. I mentioned my plans for a whistle-stop cruise round the North Birmingham section to fellow boaters and even the most enthusiastic sucked in his teeth and said “rather you then me mate – I wouldn’t risk it”.

Well, not being one to avoid a challenge I organised a crew (weight in numbers seemed wise) set a date (late spring when the weed is down), avoided school holidays (sound advice) and packed a toolkit with everything I could think of to clear a fouled prop and off we went.

The following is an account of our May 2007 watery odyssey around our own back yard. I don’t expect to convert everyone into a card-carrying member of the BCN fan club, but I would like to think a few readers may be inspired to venture off the Main Line and explore the area themselves. 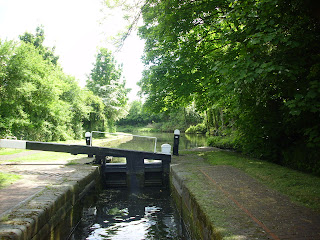 Day one: Aldersley Junction to Anglesey Basin
The trip really started with our arrival at Aldersley Junction late on a Saturday evening.
We moored up immediately below the last of the Wolverhampton 21 and were just settling down for the night when world war three started around us. Thankfully, what appeared to be an intensive house to house gunfight actually turned out to be a firework finale for an event at the adjacent racecourse and, having enjoyed the spectacle overhead, the quiet mooring had the tranquillity of a rural site. 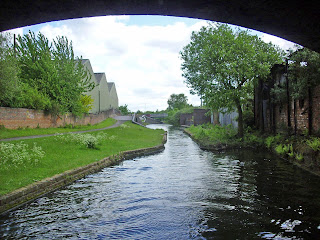 As our trip was ambitions we set off at six thirty, making light of the well maintained 21 locks in a very respectable 2.5 hours. We turned into the Wyrley and Essington Canal at Horseley Fields Junction and fortified ourselves with a full English breakfast in the remaining stub of the Bentley Canal at Wednesfield. The pub looked good but it was way to early… 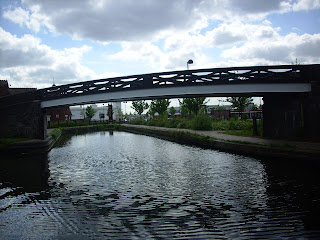 We decided to do as much of the BCN as we could and this was to include the navigation of every possible side arm so, having passed the backs of endless dreary suburbs, and removed the first mattress from the prop, we put Wand’ring Bark’s nose into the Holly Bank Colliery Basin at New invention, bagging our second arm. The canal carries the apt nickname “Curly Wyrley”, which pre dates the Cadburys chocolate / toffee bar of the same name by about 150 years! You could say that this is an “extreme” contour canal which gives even the North Oxford a run for its money. 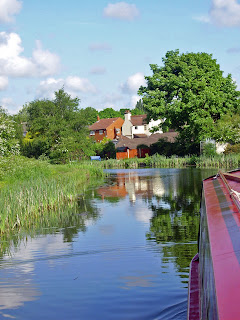 Finally, after the Adam and Eve pub you pass through the beautifully green Rough Wood Nature Reserve and the canal maintains a remote and semi rural feel to it as it passes under the M6 and on to Sneyd Junction. Sadly, there is nothing left of the Wyrley branch canal save an infilled lock chamber, so no arm bagging here but it does offer a good safe overnight mooring should you need it. 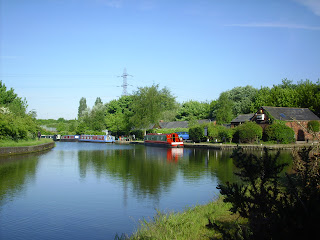 At Sneyd it’s a 360 degree turn back towards Walsall and this unquestionably marks the start of the trip’s “danger zone”. Lock your hatches, put on your tin hat, rev up the engine and don’t stop for anything.
The scene gets grimmer and grimmer as you plough through a squalid section of canal in Leamore and, having turned left at Birchills Junction, just north of Walsall, a poor situation gets even worse as you pass Harden and Goscote. We had the misfortune of making the passage in early afternoon on a sunny Sunday and the local youth were out in force. I always recon that when you see teenage lads careering around on unsilenced motorbikes with no helmets on trouble is sure to follow – and it did. Sorry, that was my Victor Meldrew moment.

We did all the right things, slowed for fishermen, smiled, said hello to all and sundry but we still encountered a couple of cases of “inbound” missile activity. I am not sure that there really is an answer to this problem and certainly trying to retaliate by chucking stuff back only serves to escalate the situation, and a narrowboat is poorly suited to making a quick getaway. That said, we knew it was the flash point, were prepared for it, kept our eyes open, heads down and emerged without material damage. 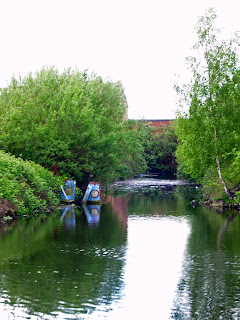 But then, what a contrast. From the hassles of Harden you bust out of the city into beautiful Staffordshire countryside with trees lining the route, birds singing, deep clear water under the keel, Swans on their nests and a canal teeming with fish swimming in shoals in and out of the lillypads which line the margins. Sites of old collieries and foundries line the route but they have all been swept away and replaced with green parkland. This really should be fertile ground for dead arm baggers like ourselves, but sadly most are silted up and impenetrable even for a canoe. However, the two “Big Daddies” can be conquered here on the northern fringe of the BCN. First there is the dead straight mile and a half remnant of the Cannock Extension Canal. This rural cruise is abruptly halted by the A5, but if you are lucky you will find some examples of {whoi}’s new narrowboats tied up outside his yard. To my mind these are the finest craft on the system, well worth a look even if the price tag is beyond you – dreaming is free. This may not always be the quiet backwater we now see. There are long term plans to link this arm to the remains of the Hatherton Canal at Calf Heath, but don’t hold your breath, the Lichfield Canal needs to be finished first which will join the BCN Ogley on the Anglesey Branch.
With evening approaching we passed Brownhills and much enthusiastic waving from local boaters moored in the secure interchange basin, giving us the impression that the sight of moving craft must be something of a novelty. Before reaching Anglesey Basin at the foot of Chasewater Reservior we moored alongside the Anchor Inn and were given mountainous helpings of tasty and very reasonably priced mixed grill. The tranquillity of Anglesey basin is probably not what it was before the M6 Toll was built, but it provided a very quiet and safe mooring.
Posted by Andy Tidy at 8:53 pm