Rivers of London by Ben Aaronovitch
December 2011
If its not too late, this is one for your Christmas stocking list. 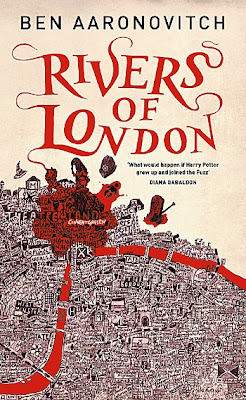 I chanced upon it in W H Smith's, waiting for a flight when my eye was drawn to the watery reference in the title. On a whim I bought a copy and was soon lost in its magical contents.
Its a fantasy police whodunit which cleverly fuses Harry Potter with Inspector Morse, with a bit of Strange and Norrell thrown in for good measure.

PC Peter Grant is fresh out of training and on the beat with PC Leslie May, colleague, confidante and object of his carnal fantasies. Grant is left alone at a murder scene when he strikes up a conversation with a witness, except this witness has been dead for at least 200 years! For a young PC Grant seems to take this leap into the supernatural very much in his stride, and is no less ruffled when he meets DI Thomas Nightingale, a wizard of uncertain age and a paid up member of the Metropolitan Police Force.

London appears to have quite a problem with the supernatural and Grant is soon apprenticed to Nightingale. Before you can say boo to a ghost, he is up to his neck in sorcery, vampires, murders and a turf war between Old Man River (upstream from Richmond) and Old Mother Thames whose interest lies in the turbid tidal zone.

The rivers of London are seductive group of water nymphs bearing names like Fleet and Ty, holding the key to the dry land murders but at the same time representing a mortal threat to his well being if they can but entice him to put a toe into their watery world.

The story moves at a cracking pace through the familiar landmarks of London, our ill prepared hero chasing ephemeral villains through both time and space to a very satisfying conclusion.

Sure, this is a book where you have to put logic and reason to one side, but once you have let yourself slip into the ghostly netherworld of the un-dead its a cracking read. One thing is sure - you will never see Punch and Judy in quite the same light!
Posted by Andy Tidy at 6:00 am

Something's gone wrong with this post, Cap'n, the text is difficult to read ...

Halfie
There is something odd when I import text - sort of solved by applying a black background!

Ooh that sounds like our sort of book - will look out for it - we don't need Xmas as an excuse to buy books - we love them!!