Other posts in this series covering the Shrewsbury Canal, Trench Arm:

This is an account of a series of field expeditions to try and track down the courses of the Shropshire Canals otherwise known as Telfords Tub Boat Canals as they exist in 2012. This network of canals served the transport needs of the Coalbrookdale Coalfield for about 50 years from the 1770's, after which the possibilities of the new fangled railways were recognised and took over. 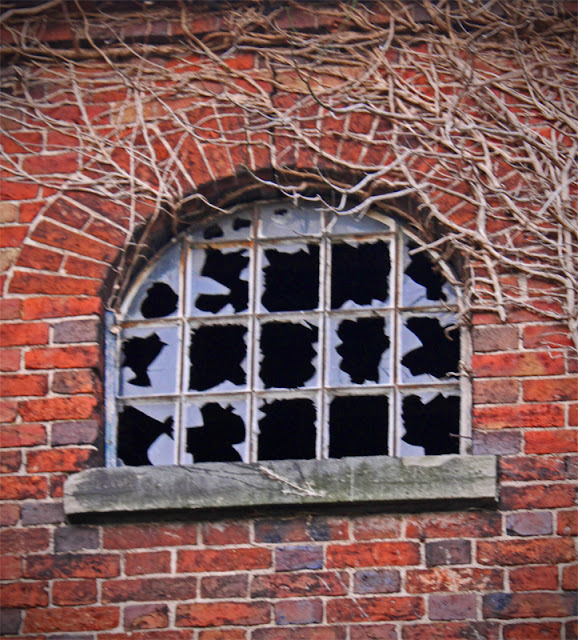 Wappenshall window
Our expedition starts at Wappenshall, junction of the Shrewsbury and Newport Canals and also gateway to the narrower tub boat network. It also represents the starting point for our exploration of the Wappenshall to Shrewsbury line, so all in all it seemed a natural place to resume our quest. 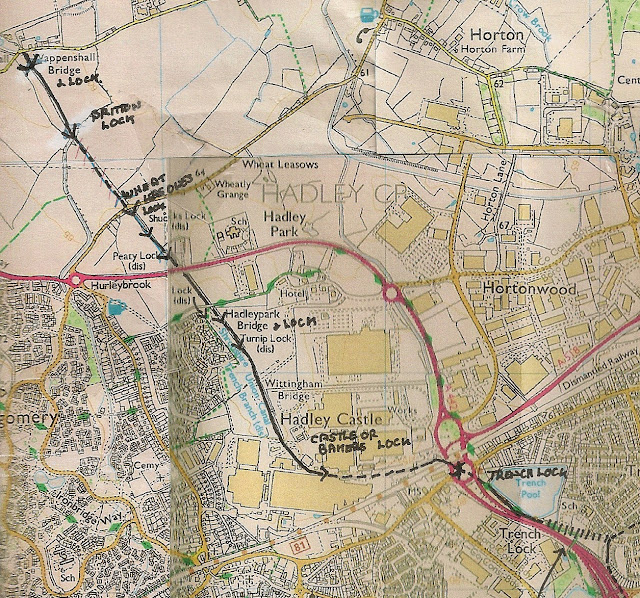 Shrewsbury Canal - Wappenshall to Trench
My brother, Dr D, accompanied me on this expedition and contributed hugely to the earlier desktop research, using every bit of evidence we could lay our hands on to identify the most likely routes and where to look to remains. We each had our views on the detail and spent most of the day testing various theories against what we saw on the ground. We ended up with a consensus which we will draw onto a contemporary OS map and offer this as what we believe to be the footprint of the long gone canal network. 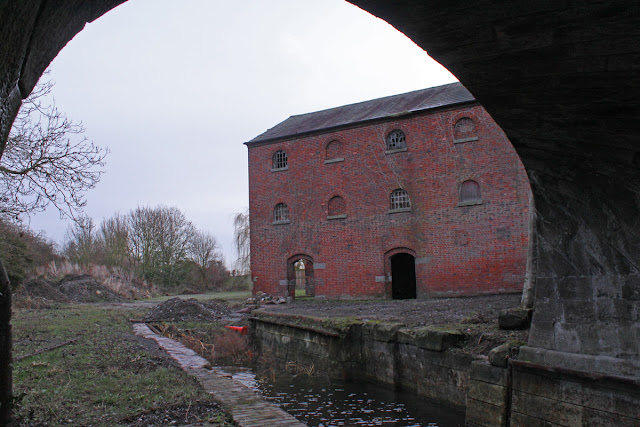 Wappenshall Warehouse
The tub boat canals were created in the second half of the 1700's following the discovery of coal, ironstone and limestone, the essential ingredients of the iron industry. The problem was that these were heavy items which demanded a robust and cost efficient transport infrastructure. It was the dawn of the canal age, so why not use this new innovation? 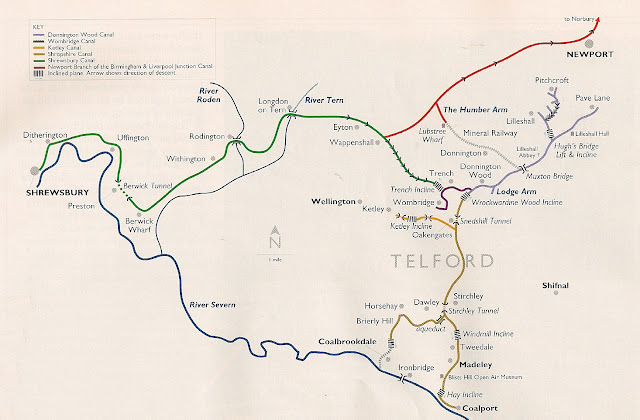 The Shropshire Tub Boat canal network
The network started with the 5.5 mile Donnington Wood Canal which linked the Donnington Wood Furnaces with the mines and quarries of Lillishall and Pave Lane. This canal was completed in 1768, joined by the Wombridge Canal in 1788 to carry more coal and ironstone to the furnaces. These two canals formed a 8 mile lock free pound just below the 100m contour. 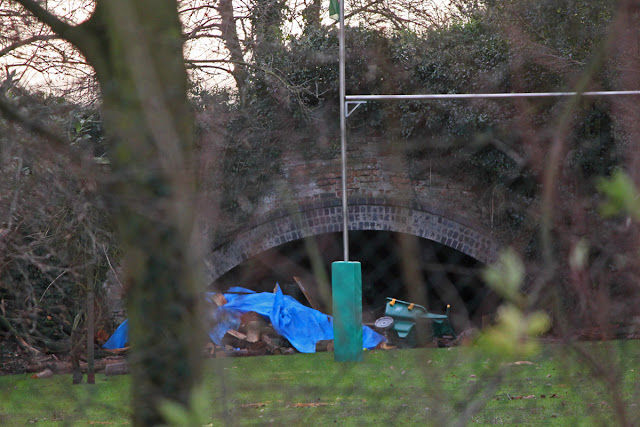 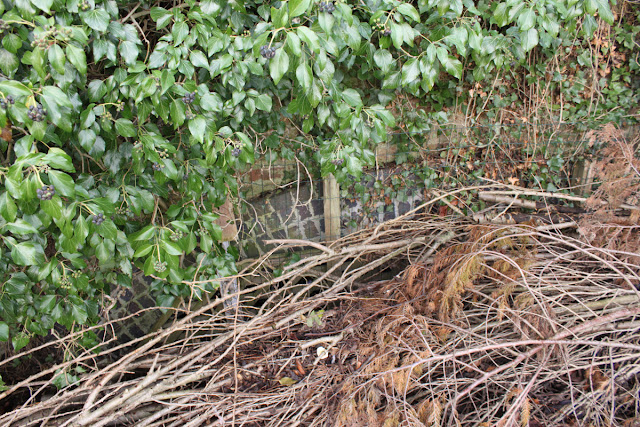 Wappenshall Bridge in garden
The Ketley Canal was also built in 1788 and then this was later linked to both the Donnington Wood Canal in the north and The River Severn in the south via the Shropshire Canal built in 1796.
Recognising the ready availability of coal for the town of Shrewsbury, the Shrewsbury Canal was built through to Trench Inclined Plane, where they purchased a mile of the older Wombridge Canal and thereby gaining a link to the Donnington Wood Furnaces  and the coal mines beyond. 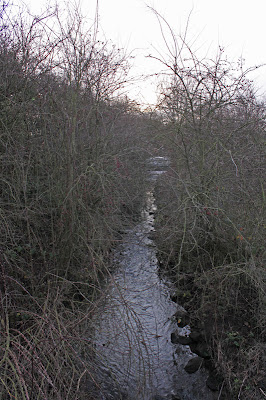 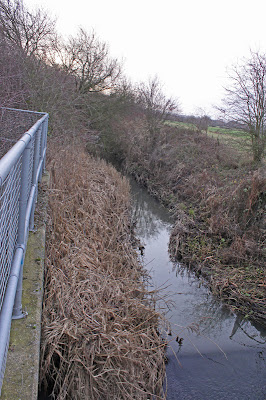 Canal Channel east from Wappenshall Bridge and site of 1st lock
Whilst the main Shrewsbury to Norbury route could carry conventional canal craft, the tub boat network used locks 81 ft long and 6ft 7in wide with each boat measuring 19ft x 6ft 5in wide - four to a lock. But it wasn't just the boats which were unusual - there were also the inclined planes which were used to raise the craft over hilly terrain with a minimum of lost water. 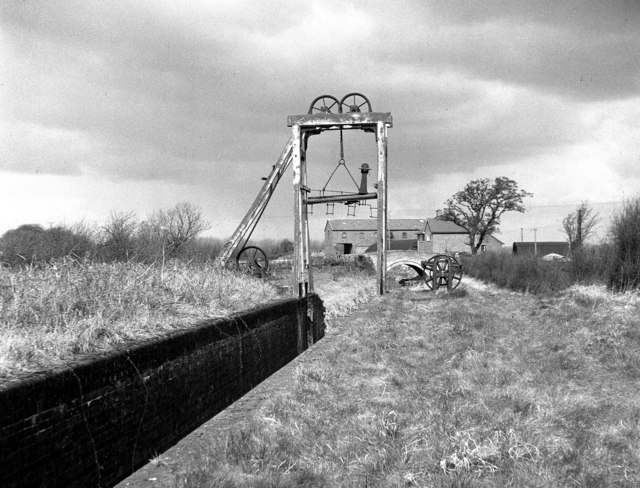 Wappenshall Lock and Junction 1964
We will follow the line in from Wappenshall along the Shrewsbury Canal to the top of the Trench Inclined plane. We will then explore the Womborne Canal and finally the Donnington Wood Canal, before setting our sights on the southern section towards the River Severn. Our best guess is that this will take four full day expeditions which we will undertake over the coming months.
Posted by Andy Tidy at 6:00 am

This is fascinating stuff, an excellent piece of investigative work. I'm amazed that so much of the infrastructure has survived 300years. I'm looking forward to further posts!

I seem to remember that one of the guillotine locks was removed and taken away as a museum piece back in the early 60's. They were a one-off historical artifact I thought.
Jonah.

My grandfather was born at Trench lock where his father was the lock keeper. He was the youngest of 7 children and told me of night lining for ells in the pool(illegal at the time but he was not caught).