I could accept any number of days like this - as many as the good Lord sees fit to deal out. 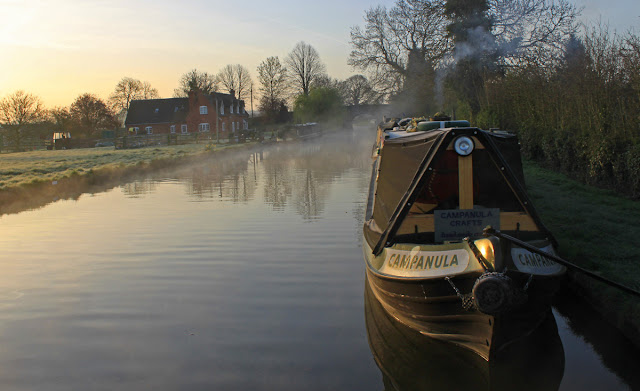 The night was very cold leaving a thick frost on the boat and the ropes were like solid bars of steel. In spite of keeping the fire in all night we still woke with chilly noses! Oh the joys of spring cruising. But the payback was a day of wall to wall sunshine. The temperature stayed low on account of the northerly wind, but you can wrap up against that.

The section north of High Offley has many linear moorings which slows progress down and then a guy jumped out right in front of us at Goldstone Wharf. I could have got all huffy (and did for a bit) but then Belle wanted to scavenge (oops, that's meant to read forage) in Woodseaves where I managed to knock a beer glass into the canal. By the time I had fannied around recovering both the beer glass and Belle, the boat in front had pulled away and we had this rather special place all to ourselves. Woodseaves is my favourite cutting, almost jungle like with its hanging vegetation and constant threat of rockfalls. 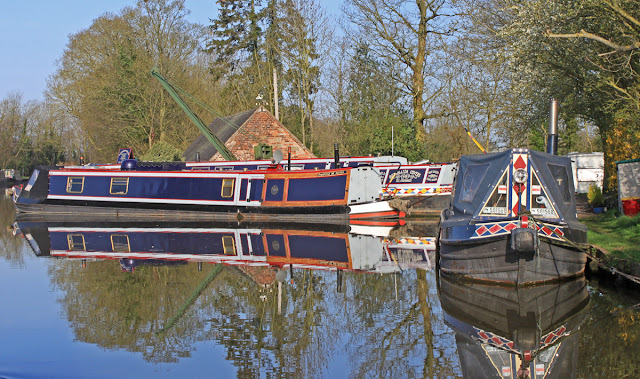 We paused at Market Drayton to fill with water, visit the supermarket and use the DIY pumpout. Water was fine, shop was open but alas the power was not on to the sanny station, so no pump out. If I have one big gripe about BW its their inability to maintain the DIY pumpout machines. Honestly, I think that every other machine we try is out or action, and when they do work getting hold of cards is a nightmare. There has got to be a better way of making this system work... And so we moved on with barely an inch of headroom in the holding tank and the crew under strict instructions not to flush the chain. 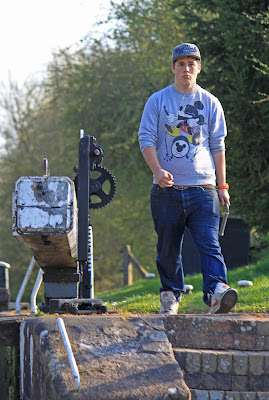 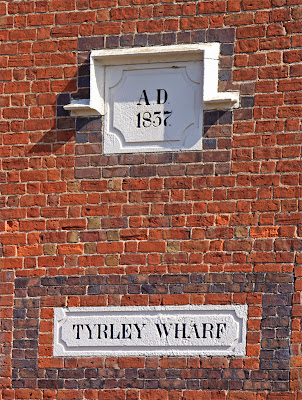 Orwells, just north of Market Drayton wasn't mentioned on the Waterways Routes map (it is now  -  the benefit of an online system - thanks Paul)  but they had a sign out offering hope of a pump out but we were frustrated once again. The owner had "gone into town". More leg crossing.

The Adderley flight are an unremarkable set of 5 locks, but the farm shop at the top lock has been growing of late with a wide variety of locally sourced produce available. One to watch out for if you are passing. Everything from eggs to home made cakes.

Then its the Audlem 15 - mostly set against us but with a lock wheeler available we made good time and soon found ourselves zipping past the Shroppie Fly and out into the Cheshire Plain beyond.  I was now obsessed by the need to pump out and seriously reconsidering my position on pump out vs cassette (dont tell the guys on CWDF - its a taboo subject). In desperation I turned into Overwater Marina with the aim of mooring on the service jetty ready for tomorrow morning. And then good fortune struck, as it so often does on the waterways. A guy wandered round and offered to sell me a self service token he had in his car (£15) which would allow be to be rid of my excess load and be on our way. Hurray - result. Empty tank - boat back on an  even keel and the a happy crew flushing away to their hearts content.

We moored just above Hack Green, another first for us and a very good spot. Time for a celebration so we cracked open the bottles of home made cider brewed from our own apple trees last autumn. It was really very good and extremely potent - Jeff found his parents very embarrassing as we giggled our way though our pints but then we found out ability to concentrate on our card game fatally flawed. A very good end to an exceptional day - Hic - cheers!

Great stuff -- I've been missing your cruising blogs! Even better, in some ways, because it's an area I know well.