I'm not sure where to start with a review for this film, I have a nagging feeling that both the film and the 2004 book on which it was based, were cunningly devised to foil all attempts as a short, concise review. 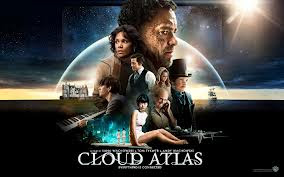 Let me try and get this organised in my head:


There isn't one plot line here but a staggering six, set over a period of 500 years with the core premise that individual actions have impacts both today and tomorrow. I have heard it described as a "worthy" tale which I take to mean that its a film with a message. You certainly leave the auditorium with something to think about, and in my case I spent the next hour or so working out which actors played which roles.


The thing is that the cast play multiple roles in different periods all cunningly disguised beneath layers of latex and prosthesis. Some of fake noses are almost comical but that dosn't detract from the film itself. Perhaps the most cunningly hidden multi character was none other than Hugh Grant, in fact I only realised it was him in the role of creepy nuclear power boss.


So, the film comes in six phases:

1849 set at sea as a lawyer sails home from America with a stowaway slave:
1931 about a Cambridge gay musician and his role as amanuensis for an elderly composer
1973 and a San Fransisco conspiracy from the dawn of the nuclear age
2012 English publisher in which Jim Broadbent reduced the audience to near hysteria
2144 futuristic uprising in a new Seoul, Korea
24th century post apocolyptic Hawaii

All this complexity could so easily result in a film which lacks any sort of cohesion, but thankfully the links between the periods are at times subtle but amazingly it works. The film weighs in at very nearly three hours and whilst the comfort factor of the AMG cinema's seats was exceeded, the plots remained compelling as they drew to their aligned conclusion.

There are so many facets to this film that one viewing isn't really enough. The complexity and intricacy of the story will stand two or three repeats, and its easy to see how the budget grew of £100m, a record sum for an independent film. So, if you like plot driven independent films, ones with star casts and ones which leave you thinking and wanting to come back for second helpings, this is one for you.

If my review has left you confused and none the wiser, invest £8 and go see it for yourself.

Hi Captain,
Have you read the book? this film came highly recommended tome by friends. I wondered if it followed the book closely. I might choose to read the book first and then buy the DVD. Thanks for a concise and thoughtful review.
Jaqueline
NB Valerie

It’s a long movie, but it still kept my interest and had me wondering just how all of these stories were going to converge at the end. Needless to say, I wasn’t disappointed even though I didn’t feel an emotional-connection to it whatsoever. Good review Ahab.

I think that there are too many characters to build much of an emotional bond.
The book is probably better in this regard and its probably good to read before you view.