We spent all summer with an ailing fresh water system which was quite literally held together with gaffer tape and cable ties, standard fare for boat bodgers like me! 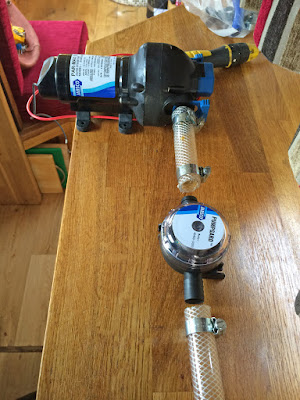 New pump and strainer assembled on the bench

The water system has remained largely unaltered since we bought the boat 12 years ago so I guess it was time for a bit of attention and up grading.

The most pressing issue was the intermittent, but relentless drip from the hot pipe under the sink. Now this issue was probably self inflicted because when I built the new galley a couple of years ago I reused a section of tap tails to reduce the food grade hose to fittings which would work on a standard Ikea tap. In the process of swapping the pipework over I suspect I applied pressure to a plastic reducer which then split under the jubilee clip. Of course, this was not immediately apparent and just seemed to drip from a poor jubilee connection. As a result we spent five months with an ice cream container under the taps which we emptied periodically. 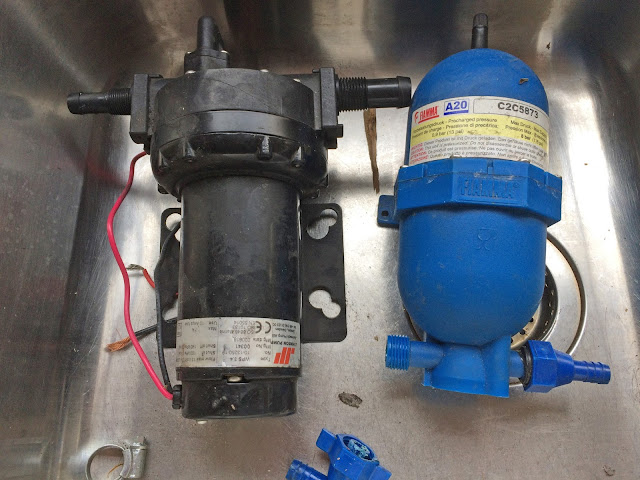 Out with the old

If that wasn't enough, the pump became increasingly rough when it operated, grinding away with failing bearings. Then there was the puny 1ltr accumulator which wouldn't hold pressure and so the knackered pump cycled away every 20 minutes or so and we resorted to turning it off overnight.

With the pump's end in sight I took the plunge and bought a complete  Jabasco pump and 5ltr accumulator assembly when we passed through Braunston in August, a precaution which ensured the old one lasted out the 2017 cruising season.

With the boat laid up for the winter the time came to strip out all the old kit and install the new. Of course, it was kind of inevitable I would be short of some fittings so a further visit to the chandlery was needed to source a water strainer, a replacement pipe reducer, a "T" insert and some extra water pipe. 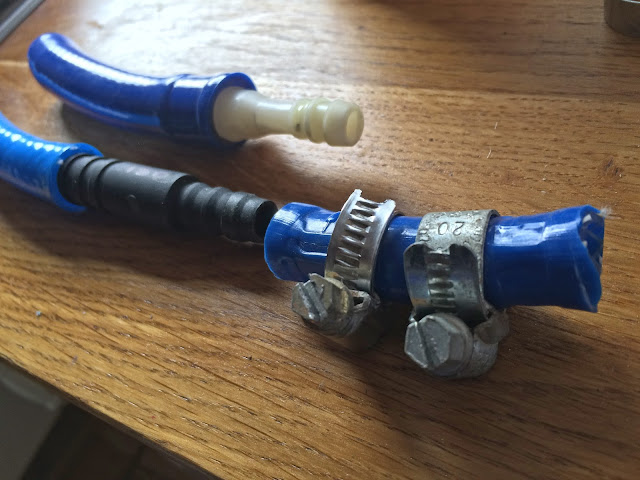 The source of all those drips

All went together well till I discovered that I couldn't get a seal on the two brass reducers on the accumulator. It turned out that Midland Chandlers has supplied the correct brass fittings but failed to include any washers to seal the faces. Hurray for City Plumbing in Aldridge who raided their oddment box and so solved my problem for free. 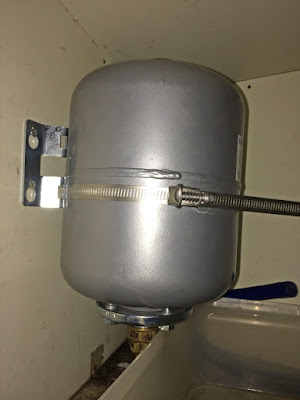 Whilst I was tearing the fresh water system to bits I also replaced the filter cartridge in the drinking water tap, a £90 import from General Ecology which saves us using bottled water. This was the first time I had changed in in 18 months and the old filter looked very dodgy even was trying out patience when in use. £90 is a high price each year but the convenience probably justifies the spend.
Posted by Andy Tidy at 9:05 pm

Hello Andy, I really enjoy your posts. I am researching my family history, Fradley, of Staffordshire. They lived and worked on the canals.
I am intrigued about Toll End Tipton. I have read your post and last month I visited the canal that is left. My gt Grandmother was born on a canal boat at Toll End in 1864. I would love to know where, I know that at Ellesmere Port there was an arm that the boats pulled into if a baby was coming. I can't see anywhere obvious from the canals there now but I am wondering what was there before.

Would you be able to advise?

Alison
Most of the Birmingham and Black Country boats were used for local traffic which meant that most boaters could get home to a house on land each night. For longer trips to the coalfields of Cannock it was a two day rum but then they sometimes used a small day cabin. Not many Tipton based boats were the long distance sort with a family in the back cabin. If they were working on long distance trade they tended to stop at places where a doctor would be available and pause till it was all over. The most common place was on the Birmingham to London run and to support the boaters a dedicated nurse was at Stoke Bruene (Sister Mary) and if she couldnt help in her canalside dispensary the village doctor would help out. There has been quite a lot written about the medical support at stoke bruene but in places like the BCN the boaters probably relied on local contacts of the Missions which helped in many ways. There isnt much left of the Toll End Canal is there! But, there are members of the BCN Society who remember boating its length.
Andy