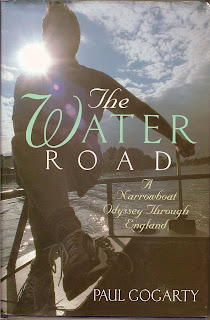 I am reminded on that classic song about New York - so good they named it twice.

This book is so good I have owned it twice! First time around Belle bought me a copy and I was extolling its virtues to a literary friend, who was considering a similar project. This conversation ended up with the book being lent out and sort of disappeared to Prague, along with the friend!

I was therefore delighted when my erstwhile colleagues bought me another copy as part of a leaving present. They knew about my nerdy fascination with all things canal and were very pleased with themselves for having winkled this gem out. I didn't let on that I had read it before...

The author is a professional journalist and that shines through this chunky 350 page read. He is a man with a mid life crisis on his hands and sought solace, you guessed it, in the arms of the Inland Waterways. This is a very good approach and so much cheaper than the usual, you know - buy sports car and trade in the missus for a new, younger model. If the petrol bill doesn't kill you the private prescriptions for Viagra certainly will.

As to the book, Paul sets off in Caroline, an ancient Adelaide Marine hire boat in early 2001, the year of foot and mouth. His aim was to do a huge figure of eight from London to Birmingham, then to Manchester and over the Pennines via the Leeds Liverpool. His return route was back down the eastern side on England via the Yorkshire waterways, the Trent and then across to Oxford and complete the journey via the Thames. It make me weary just to think about it!

Paul really immerses himself into life on the cut and his witty and insightful accounts of the characters he meets along the way are three dimensional and at times make you LOL (laugh out loud to non text speakers). He has the predictable ups and down with local natives, which we all experience from time to time, but the book holds you in its spell throughout the journey. I love it when travel accounts cross over each other, and there is a cracking one here where Paul on NB Caroline passes The Tuesday Night crew on NB Earnest in Lincoln's Brayford Pool. If you havn't visited the Tuesday Night Club's (TNC) website you should - its a gem.

All goes will till Paul takes an enforced stop in Oxford to attend to a family commitment. At that point, the book comes to an abrupt halt. I don't know if the break in continuity caused it, or the altered personality of the Thames was to blame, but the book never really gets back into its stride. It feels like a dash to finish a project with some pre arranged "meetings" thrown in to add spice. The heart just isn't there.

But this book shouldn't be remaindered just because the last section is below par. The rest is a triumph and well worth a read, once, twice or maybe more.
Paul - if you are ever in the Midlands and fancy a pint give me a shout.