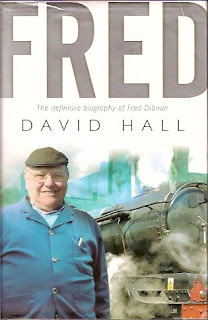 Whilst the biography of Fred Dibnah isn't really a waterways book, his fascination with all things industrial revolution makes is a worthwhile read for canal enthusiasts. Furthermore, he was an active canal enthusiast in the Burnley / Manchester area and a great advocate for restoration, so I am allowing his book into the "waterways" section of my library.

Fred feels like a permanent fixture in my life, with vivid imaged of the early series "Fred Dibnah, Steeplejack" an essential part of my adolescence. The book takes a candid look at his life and passions with a particular bias towards his developing role of TV presenter. This bias is understandable as the author, David Hall, was his producer for many years and was therefore particularly well placed to observe this aspect of his persona.

The book tracks his life from an under performing student in Burnley, through his joinery and steeple jacking career and finally into his TV presenting role, whilst all the time following the ever expanding living museum in his back garden and the gradual restoration of his two steam engines, not to mention the replica coal mine!

Fred comes across as a man utterly obsessed with the Victorian era and steam power. So obsessed that his family life and his finances suffered and, just as stability arrived in his later years, his health failed, robbing us of one of England's finest characters.

The book contains many direct quotes and it is impossible not to hear his Burnley accent booming out of the pages. An absorbing read for those this a passion for the industrial revolution.
ISBN 0 - 593 - 05664 - 7