Ice Breaking on Staffs and Worcester

Ice Breaking at Four Ashes
10th Jan 2009
It's always good to get the first run of the season under ones belt.
I have plans to try and document the waterways journeys I took with the Captain Snr, Matilda and sometimes my brother during the late 1960's and 1970's. These plans moved one step closer this weekend with an overnight stay on Wand'ring Bark with my brother, who was part of the crew on the earlier trips. Our plan was to take the boat to Penkridge, have a pub meal and then spend the evening sorting through the many boating transparency slides taken between 1967 and 1979. 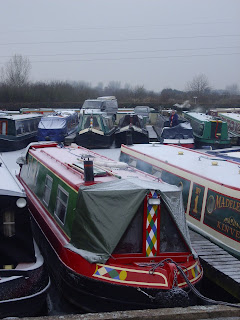 The weekend had been scheduled in the diary for months, so a little bit of frost wasn't about to put us off. We arrived at Calf Heath to find WB covered in rhyme and the marina covered in a thick layer of solid looking ice. However, an inspection of the cut at the junction with the Hatherton Canal gave some hope, it was ice free. 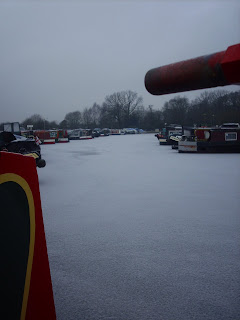 We got the stove going and, after a bit of effort, eased WB out of the marina. Our initial optimism was dashed when we turned the first corner and were confronted by a solid sheet of ice which stretched from bank to bank. Never mind, "I'm sure it will clear up soon" I said as we crunched into the ice floes. Predictably, things didn't clear up and is was soon apparent that we wern't going anywhere near Penkridge, not even Gailey for that matter! We quickly revised our ambitions and decided to make for the winding hole at Calf Heath bridge, alongside the Four Ashes chemical works. Even this turned out to be a challenging target, but by the time we had moved a mile we didn't fancy stern hauling the boat all the way back! 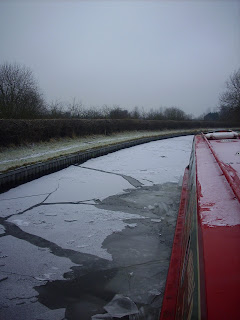 The ice got thicker and thicker, with the boat grinding its way along and chunks of ice skittering away from our bow. We finally made it to the winding hole and thankfully, the water under the bridge was ice free, which gave us some room to rope the boat round for the return trip. Rather than face the ignominy of a quick return (we had acquired quite an audience on our departure) we stopped for lunch, warming our numb fingers and watching the local model aeroplane club test a model jet. I had never seen a remote controlled jet before and the high minimum speed made for a very interesting landing. After a lazy lunch and much catching up we made easy passage back through the path we had cut, returning to our berth as the sun faded at 3.30pm. Don't even think about the blacking on the bows..... what blacking? 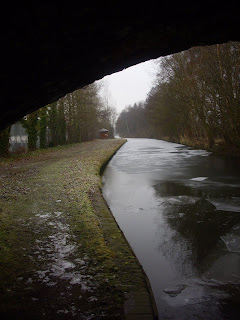 Our plans for a pub meal evolved into drive to the Fox and Anchor at Coven, where we secured a prime fireside spot and whiled away a couple of hours, only to return to the car and discover that thieves had smashed the side window, trying to steal a non existent Sat Nav and ipod in the glove compartment. Great.
After a chilly trip back we attacked the old photos, sorting them into chronological order on a light box my brother had purloined from a hospital. The slides were rarely labelled and at best they had a cryptic caption like "leaving a lock near Birmingham" - thanks Captain Snr!. However, we applied ourselves to the task sorting them initially by boat and then, by looking at the backdrops and searching our combined memories, we managed to piece together the likely routes we had followed. Finally, we tried to put them into a timeline based on the ever maturing face of yours truly (I was seven when we started). In the end it was rather like a jigsaw of our past - thoroughly enjoyable for us but totally boring to anyone else. 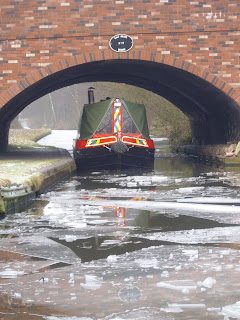 Neither of us have been very good and recording our pasts ,and this exercise proved the benefits photographic records. They provided memory triggers of things in the past, events which should be remembered. In spite of a clutch of degrees and diplomas between us, we found evidence of trips we had completely forgotten, and photos of friends and families that had joined us, many of whom are either dead or forgotten. The moral of this story is; don't throw out your old slides or prints - stick them in a box because you never know who may want to rake over the past in 40 years time!
The next step is to convert these faded images into a digital format which will then persist in glorious sepia for ever. When this task is complete I will publish the photos in the blog, preserving the past on line in case my hard drive fails.
We settled down for a good nights sleep at 1.00am, with the stove warding off the frost. Interestingly, the on board thermometer indicated that the air temperature inside the boat dropped to minus 8 during the week, testing the integrity of the pipes and anti freeze to the limit.
Posted by Andy Tidy at 6:32 pm

What a great weekend. I really will look forward to seeing those old photo's...did they really have cameras then?

Last year I attempted to take The Robber Button out to Tixel Wide and got as far at the Junction with the Staffs and had to turn back without any blacking... Something I will never do again LOL