13 Miles
21 Locks
6 Hours
The moorings at the Black Country Museum were, as usual, excellent. We availed ourselves of the facilities and took our leave just before 9.00am. 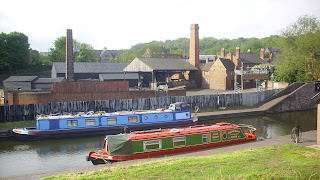 We surprised two large Anglo Welsh boats sporting German flags and containing about eight bavarian looking lads in each, who had moored just above the factory locks. A strange choice of mooring but they seemed cheerful given the number of Fosters cans littering the deck!

I was struck by the cleanliness of the BCN this year. The words BCN and floating debris are regular bedfellows, but not anymore. As we approached Wolverhampton I found out why.
A community service initiative has been set up which involves a tug pulling an open Joey Boat filled with young people (nostly lads) all carrying a long pole with an office paper tray nailed to the end. These contraptions are then used to skim off any surface debris, which is then returned to base for disposal / recycling. This is a great idea as it takes the kids who create the mess back to clear it up! They have been so successful that they are now struggling to find anything else to remove. Perhaps a trip up the Wyrley and Essington would offer a more bountiful hunting ground! 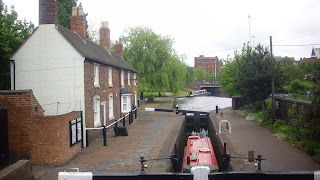 We descended the Wolverhampton in the rain (again), this time pausing at the half way point to get some tea from Matthew's Crown Cafe. Whichever way you travel, the Wolverhampton flight is a long slog of between two and three hours. I always relish the sight of the rail and road bridges which marks the half way point, and a trip to the trailer diner has become something of a habit. 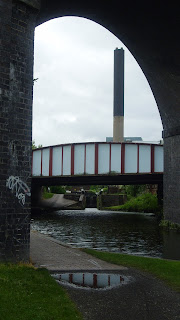 Matthew does a mean line in bacon butties - aka death in white bread. Naughty but nice! If you are really organised you can phone Matthew on 07866 042880 a couple of locks before you reach his diner at Lock 10 (Fox's Lane Bridge) and have your butties and hot drinks ready and waiting. This picture fails to do the diner justice, but his van was doubling up as a windbreak on this wet and windy Tuesday. 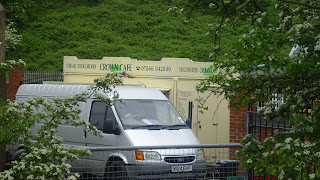 There has also been ongoing work around the Wolverhampton flight, with by washes relined and lock furniture painted. 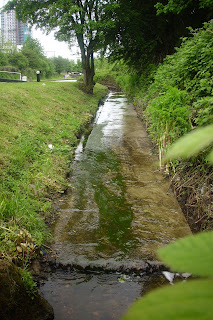 All in all, we found the water channels in fine fettle. We had very few trips down the weed hatch, and when we did it was to remove stray poly bags rather than ropes, cones, trousers, bags, trolleys and carpets witch were a feature of earlier journeys. Yes, we picked up the odd bit here and there and the prop was rarely completely without an adornment of polythene dreadlocks, but there was little of any real substance, and what there was could wait until we came to a scheduled stop.

A very good, if somewhat damp four days which included 80 miles of water travel, 98 locks in 37 cruising hours. Whilst much of this trip covered known ground, we did add a few bits of additional BCN to our tally, which now stands at 95%. The last remaining stretch is from Salford Junction, through the Perry Barr Locks to Rushall Junction on the Tame Valley Canal. To have this as the last unexplored stretch is perverse, as it is a mere two miles from my home and I pass over is twice a day going to and from work!
Next year.....
Posted by Andy Tidy at 11:27 am

We came up the Wolverhampton flight last Wednesday and were ready with our money and apetites for a bacon buttie. BUT HE WASN'T THERE!!! Do hope he is just on his holidays and not gone forever. David was going to "write it up" for Canals and Rivers.

Brenda
Oh no! He has never failed us. Next time (there always is a next time when it comes to the Wolverhampton 21).