Rugeley to Armitage
Kayak trip - Royal Sutton Coldfield Canoe Club
31st May 2009
My boating trips extend beyond those experienced on Wand'ring Bark, and from time to time Jeff and I set off to explore new waterways in our kayaks (canoes are those open boats Indians and trappers used to use). 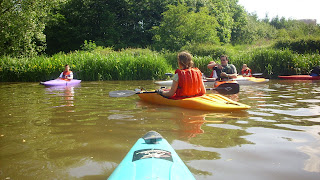 This trip was organised by the Royal Sutton Coldfield Canoe Club, who include regular river and canal runs in their itinerary. The sun shone from a clear blue sky and it was a joy to take to the water at 10.00am from the slipway at Ash Tree Cruising Club.
When the trip was mooted on Thursday, we hoped to have about 10 boats on the water but in the event we were inundated and put out a fleet of 24! We made our way northwards through the centre of Rugeley and then out to Brindley Bank Aqueduct where we ported our craft down onto the River Trent, launching on the north bank about 100 yards upstream. 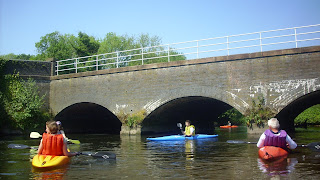 The journey downstream was very pleasant, although maybe not as pretty and the reach down to the aqueduct from Great Haywood, with which we are familiar from previous trips.
The route takes you down past the Rugeley coal fired power station, which, till 1990, was fed from the adjacent Lea Bank Colliery. There was, at one time, a couple of locks down to the Trent near the aqueduct but I have yet to find any remains. 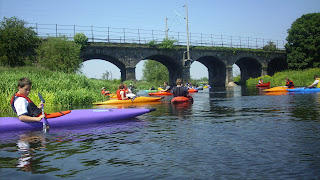 The river maintains a fairly straight course behind the power station, till its cuts under the railway near Armitage. At this point the channel is constricted and sets up a small set of rapids, which adds interest. 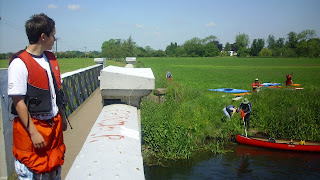 We finally exited at the Armitage footbridge, porting the kayaks through the subterranean footpath under the railway, and then back onto the Trent and Mersey Canal for a gentle paddle through the narrow remains of Plum Pudding Tunnel, and so back to the Ash Tree pub. The absence of a good bankside led to many of us attempting a dolphin entrance (straight in off the bank - nose first). Most of us made it but we did have one swimmer!

All in all a gentle four hour paddle taking in a mix of canal and gentle river. A great way to spend a sunny Sunday afternoon at the end of May. Mind you - its strange being in the company of others who refer to narrowboats as "barges" and know that it would be impolite to correct them!
Posted by Andy Tidy at 7:00 am