Norbury is a strange sort of place. Mention it to any canal enthusiast and they will know exactly where you mean, a bit like knowing the whereabouts of Peterborough to anyone else. But mention Norbury to a non canal person and all you will get are blank stares. 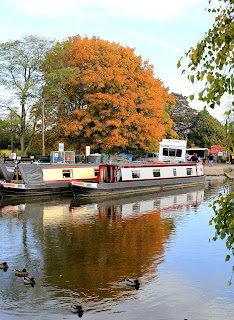 I suppose that this reaction isn't surprising. Norbury may be a very significant point on the Shropshire Union canal, but in reality even it's claim to be a junction is somewhat tenuous. The Newport Branch canal, which struck off west from this point, was abandoned a good 70 years ago and the flight of locks which carried the cut down to the level of the surrounding fields long since gone. 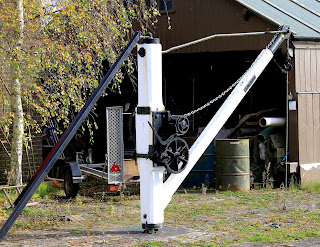 An original wharf crane in the BW yard at Norbury

Plans are afoot to restore this canal, connecting it to the Shropshire Union level with some form of amazing lift, like that seen at Falkirk. I don't know if the idea will ever see the light if day, but I suspect that given the number of visitors that already flock to what currently exists, the presence of a massive lift would probably be a huge tourist draw.

So what we are left with is a small hamlet, but one which owed and continues to owe its existance to the canal which runs through it. There isn't a lot to the place, The Junction Inn, a chandlery and boat hire business, a working boatyard in the stub of the Newport Branch,  A BW office and yard  and long line of residential / non residential moorings. 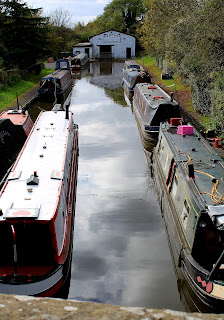 Boatyard using the first lock of the Newport Branch as a dry dock.

As I said, the place owes its continued existence to the canal, which is both unusual and pleasant. I had a wander round the hamlet on a recent visit and was strck be the timeless feel of the place, the autumnal trees casting glorious reflections in the still waters.

It's a case of quality triumphing over quantity in my opinion, and well worth a stop at the visitor moorings if you have the time.

Andy,
You've summed up the charm of Norbury Junction perfectly, but if anyone is contemplating a stop here its probably better to avoid summer Sunday afternoons, when its more like Blackpool. Plenty of people seem to know where it is then!