Pretty as a picture

Pretty as a picture
April 2018

Helen has been keeping secrets from me and, as we all know, "suspicion tears you apart". Not good news on the run up to our 30th wedding anniversary (23rd July).

She has been nurturing this secret from months, coyly alluding to "something special" every now and then, but never letting on what she was keeping from me. Whats more,I knew there was money involved, which disturbs an ex banker to his roots. 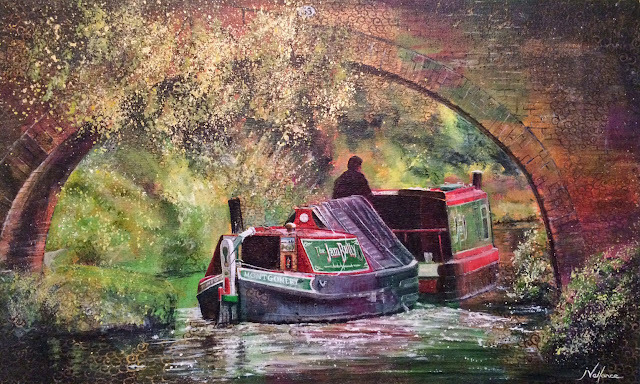 Jan Vallance's painting of our boats under way

Finally. a few days ago Helen started a gradual reveal. The money was for a gift to both of us to celebrate our forthcoming anniversary, but such was its physical size there was no way she could smuggle it onto the boat for the actual day, or even hide it away at home.

Today I was expecting a big pre season glass delivery, but instead the parcel man arrived bearing a big flattish package which was snatched from my grasp by "Mrs Secrets". She returned beaming with a pair of scissors and asked me to open it.

After a brief tussle with the parcel tape I got in and there was the back of a picture. Oh er - we are not always in agreement when it comes to artwork, so it was more than a bit of nervousness I turned it over.

It was a specially commissioned Jan Vallance painting and not just of any old canal scene, but instead it was one of our own boats making their way north along the Worcester Birmingham Canal. It is fantastic, lovely, amazing and all so technically accurate! I love it and immediately saw that the chimney breast in our dining room was the ideal place for it. As you can imagine, Helen was there way before me....

But that's not all. The actual image is included in Barry Tutenberg's top fifty photographs from their 2015 travels.

So a vote of thanks, first to Helen, the continuing Mrs Tidy whose secretive behaviour is not only forgiven but forgotten. Secondly to Jan Vallance for creating such a lovely and unique painting which will inspire be during the long winter days at home, and finally to Barry Teutenburg who not only supplied the original image but also suffered my glacially slow progress along the Worcester Birmingham canal for hour after hour!
Posted by Andy Tidy at 3:35 pm

What a lovely surprise. Congratulations to you both! Looking forward to following your travels this year.

What a lovely surprise. Congratulations to you both! Looking forward to following your travels this year.

Well done on keeping the secret Helen. Brilliant art-work by Jan - and I may be biased but she had a wonderful image to work from :-)

That looks very nice. I wish we'd done something similar!

Jan has captured it beautifully