We didn't really know what to expect, possibly some sort of mini Arlington Cemetery aped from our cousins across the Atlantic.

What we found was something of a revelation. This is no cemetery, there are no bones or headstones and neither is this an exclusive military garden of remembrance. It is much more.

This huge site in the Trent valley is built on reclaimed gravel workings, leased by Lefarge Aggregates for 999 years on a peppercorn rent and sits amid an array of glittering lakes. The site is split into many gardens and areas, all planted with slowly maturing trees which form part of the National Forest initiative, many of which are dedicated to individuals or groups who have died in the course of serving their country. 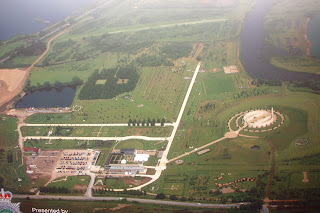 But it was one non military garden that brought tears to my eyes within moments of entering its gate. It was the SANDS garden, dedicated to children who have lost their lives during or shortly after childbirth. Hundreds and hundreds of pebbles line the paths, each bearing the name of a child who never had an opportunity to see life in all its diversity. Each pebble lovingly painted or inscribed by mourning parents, grand patents or brothers and sisters, each laid down with care, each a small tribute to a life that never was. It's not an elaborate garden but it is a place of great peace and sadness, a place I will never forget.

Then there are the myriad of other memorials, most quite modest but all erected with love and respect. I was particularly struck by a sculpture carved out of three bits of stone which, when approached from directly in front, revealed a perfectly formed Star of David. Clever, memorable and understated. 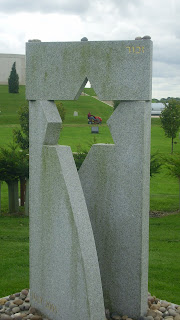 Behind this Jewish memorial stands the huge monument to the fallen, a great circular stone fortification sitting atop a mound, its golden tipped obelisk towering above and forming the focal point for the site. There are, as you would expect, hundreds of names carved into the walls, each name loved and mourned by their family. But perhaps the saddest aspect of this structure is the huge wall which remains blank, awaiting the names of the "yet to fall". 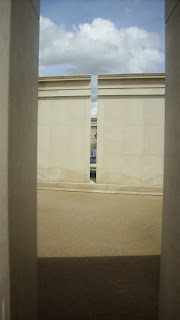 Within this blank wall, and its inner counterparty, there is a narrow gap to the south through which, on the eleventh hour of the eleventh day of the eleventh month, a shaft of sunlight falls directly onto the central memorial. Simple, effective and profound.

It's a crying shame that as a race we learn so little from history, with each successive generation being obliged to fight and die for the sake of others. Don't get me wrong, a visit to the National Arboretum made me profoundly grateful to those that made the ultimate sacrifice, but I am saddened that such a sacrifice is still necessary.
The Memorial Arboretum is a work in progress and is clearly winning a place in the heart of the nation. Currently the immature trees give it a "new golf course" look, but given 20 years they will have grown and provide green avenues of peace and tranquility, places to walk, read and reflect. A truly special corner of the nations newest forest.
If you want to know where it is from the canal, look out for the tall Lefarge sand excavators which border the car park. Whilst its only a mile or so from the village, an approach by road may be courting disaster. I would suggest you either seek out the local bus service or maybe call a taxi for the short ride.

Entrance is free, but all donations towards it's maintenance, upkeep and development are much appreciated.