Huddersfield Ring 2011 - the Staffs and Worcester


Other Posts in this series
1. Calf Heath to Armitage - this post
2. Armitage to Swarkestone
3. IWA Invasion
4. Swarkestone to Nottingham
5. Nottingham to Newark
6. Newark
7. Newark to Torksey
8. Torksey Castle
9. Torksey to Keadby
10. Thorne to Southfield Junction
11. Thorne
12. Pollington to Wakefield
13. Wakefield to Huddersfield
14. Huddersfiled to Staithwaite
15. Slaithwaite
16. Staithwaite to Marsden
17. Marsden
18. Marsden to Uppermill
19. Uppermill to Marple
20. Marple to Whaley Bridge


What a start to a summer holiday! 22 / 23 degrees with blue skies and a few fluffy white clouds to offer a bit of shade from time to time. All in all, perfect boating weather for a trip down the Staffs and Worcester and onto the Trent and Mersey. In fact, as I reflect on it, it was exactly the same journey as the start of our Easter trip to Leicester. 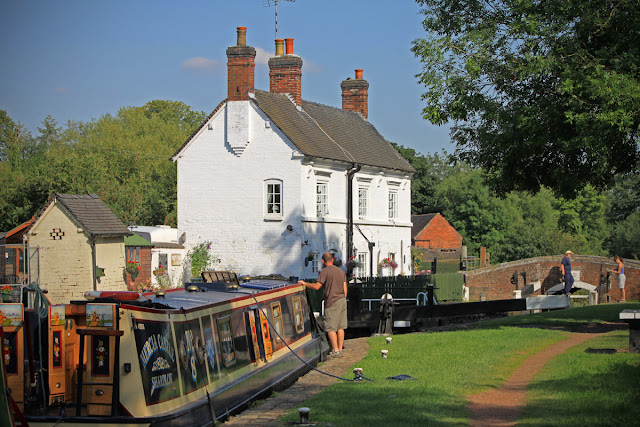 Colwich Lock
We did make a bit of a jump start by moving off last night and dropping down the top two locks of the Gailey flight. Maybe this wasn't such a good idea as the night was very still and the drone of the M6 was louder than usual - not that it kept us awake.
We we up and off at 9.00am, passing a steady stream of boats rising from Penkridge finally coming up behind Hawkesbury, a converted working boat, the last Big Woolwich to be built. Her skipper charterers her out and was doing skipper training. Hawkesbury will probably be changing hands later this year as her owner seeks a new direction. It will be offered as a going concern but the indicative three figure asking price felt a bit steep. The was planning to tow a broken cruiser to Teddesley but its owner was still asleep after a long night in the pub, so he will have a bit of bow hauling ahead of him. 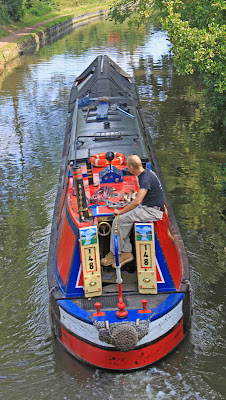 We pressed on by ourselves after Midland Chandlers, the canal fairly quiet  for the summer holiday period. This eastern end of the Staffs and Worcester is one of my favourites and this was as good as it gets, under a warm summer sun with two week of cruising stretching out ahead in a long lazy ribbon of silver. Things were not so quiet at Deptmore Lock which has been the scene of feverish building works for the last year, with its new owner toiling away in the garden and bemoaning the problems he had encountered in its renovation. Its nearly there now and will soon be resplendent in a covering of Gardinia White. Another canal side property brought back to life. 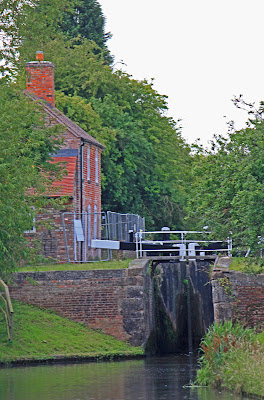 Rejuvenated Deptmore Lock
Tixall was rammed, as usual. Its a nice spot but hopelessly over popular and not at all to my get away from it all tastes. The boat J & J Dawson (cant see a name) may have had the same idea as they had forgone the bank and dropped an anchor in the midst of the wide, the boat gently swinging to and fro in the zephyr winds. I have to admit that I really fancy that, very reminiscent of my days on the Norfolk Broads. 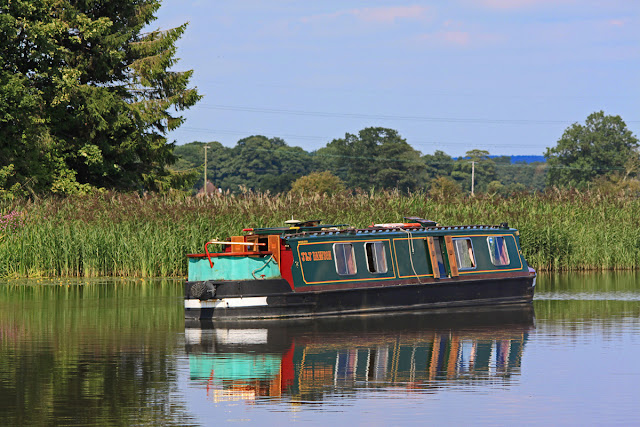 Tixall Wide
We picked up water at Haywood Junction and just as we started to set off I had second thoughts. One boat was approaching from he north, one was winding, two were approaching from the south and them I heard the trumpet of one from the S&W. I tied on again and watched mayhem ensue - five boats vying for the same bit of water. The last thing they need was a sixth.
It was a great evening so, recharged with ice creams, we continued on through Rugeley with BBQ's wafting in the summer air and so on to Armitage with its toilet mountain. Bell has been busy foraging again and between Rugeley and Ash Tree we discovered a wild plum tree, its fruit laden branches hanging over the canal and just waiting to be picked. 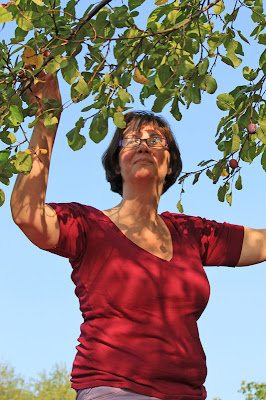 Plum harvesting near Plum Pudding! (Trent and Mersey joke!)
We moored up near the Crown, one of the quiet spots well away from the roads and railways, the exact same spot as Easter.
Posted by Andy Tidy at 6:00 am

Three figures doesn't sound very much to me - or were there some other figures after those three?

And I trust you apologised after ramming Tixall!

Halfie - just a few. Its nice to work in thousands. At work is millions or billions, and even then its dollars or Euro!