Do you find that some days you seem to just lose your mojo? Well, today was a case in point for me. Maybe it was because we had suddenly hit manually operated locks, or maybe because I realised the huge number of locks which lie ahead, but one thing is certain - I wasn't at my happiest! 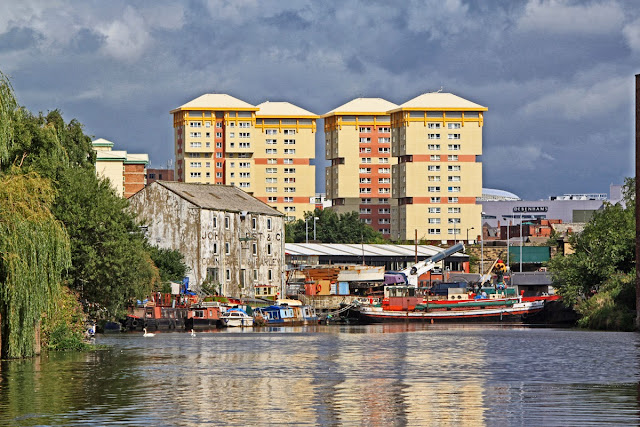 Stanley Ferry was a quiet spot and we set off at 10.00am, soon finding ourselves at Fall Ings Lock, the first on the Calder and Hebble. These locks are much smaller than those seen on the Aire and Calder, but they are still cavernous. 
In no time we were in Wakefield, its extensive basin twinkling in the sunshine.

This section of the Aire and Calder flirts with the river, dipping in and out all the time with locks followed by bits of canal and flood locks. The area has also been heavily mined and you keep seeing the bankside copings dropping under the water and layer upon layer added to the top to keep the water in. In some places the bank must have been built up by 4ft or more.


The wind blew strongly from the north, one of those days when you are shivering in the shade but sweltering in the sun - very hard to dress for. Not that the weather had much to do with the number of boats on the move. At most we saw six or seven, and that is a lot for the area. There are next to no hire bases and few boat clubs - all a far cry from the hustle and bustle of the Midlands canals.

What few boats you see you tend to remember and at Battysford lock we saw Mulled Wine for the third time, this time broken down with a failed throttle cable. We had come down the Trent on the same day and swapped yarns most days since at one point or another. The skipper was a handy sort of a chap and figured he could jury rig something to get him back to his mooring at Brighouse. He did achieve his aim, sort of, as we saw him the next day doing some kangaroo boating. His throttle worked but offered two options - tick over or full revs. He therefore crept along till the time came to maneuver - when the tranquility was shattered by a cloud of smoke and a seething mass of foam at his stern. But hey, it worked and he made it home... 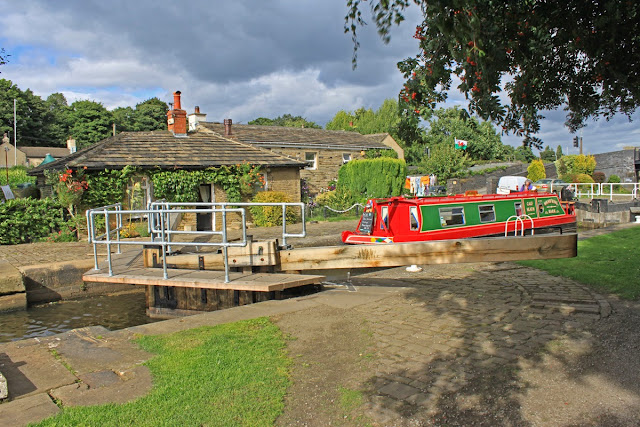 This is a section of contrasts. One moment you are sweeping along a broad deep river section and the next you are creeping along in the intimacy of a canal. All along the line the navigation passes beneath the abandoned remains of railway bridges - reminders of a much busier past when the valley was a hive of industry. Interesting from and industrial heritage perspective, but a little sad as well.

We have been having niggling problems with the engine all season, a position which is gradually deteriorating. The engine shake at low revs is trying and the prop shaft drip is up to about seven mop loads a day - and a needing turn on the stern gland once a week. All that shaking is making the leak worse - time for some professional help if we can just limp home. I am sure there is a snag with the injectors coupled with a failed engine mount. 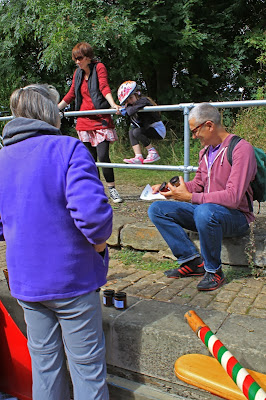 Jam sales on the move

On the plus side, we sold three pots of tam today, having been hailed by a passing cyclist. This steady demand for jam on the move bodes well for the future. Helen has been busy processing yesterday's pickings - Chinese Bramble Jam, Bramble Jelly and Bramble Chutney.
Posted by Andy Tidy at 6:00 am

Email ThisBlogThis!Share to TwitterShare to FacebookShare to Pinterest
Labels: Calder and Hebble

If our paths cross again not only shall we manage to say hello next time but we will certainly try some of your jam :)

I love the top photo.