We are fast approaching the end of our stay in New Zealand, and are spending the last few days closing in on Auckland via the Coromandel Peninsular.

The last hop was less than 80km, moving from Hot Water Beach to Coromandel Town via the scenic coastal route. Its a lazy Sunday and whilst the area is usually busy with Aucklanders escaping for the weekend, the poor weather seems to have put them off. 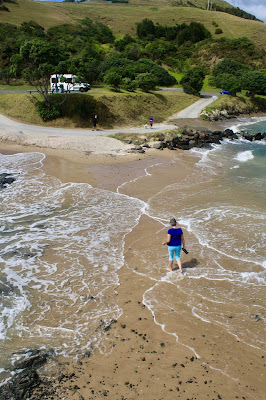 With time on our side we decided to stop at any beaches which took our fancy, starting with Simpons Beach. As it was nearly high tide the sandy strip was quite narrow but with few parking spaces and few holiday makers in the beachfront houses we pretty much had the place to ourselves. Then it was on to the north facing Rings Beach with its rocky headland almost cut off by the surging waves. This beach offered great views over Mercury Bay and the northern end of the Coromandel Peninsular.

Our day ended in Coromandel Town, once a frontier gold town when the metal was discovered here in 1850. The gold rush was short lived the miners soon moved on to richer pickings elsewhere. Whilst the town retains a bit of a frontier feel, it is all rather well heeled  now and is a New Zealand equivalent of Blakeney or Holt in North Norfolk. 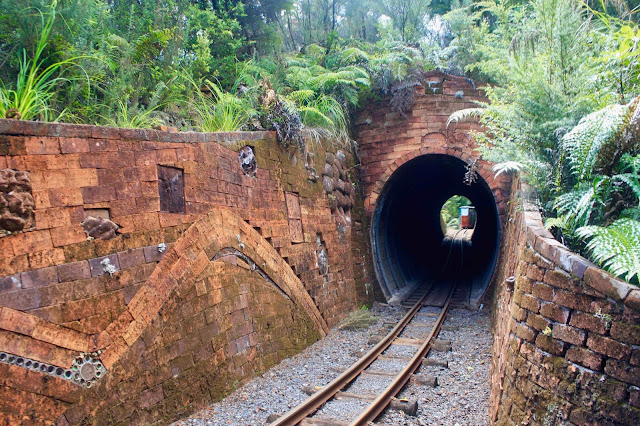 Tunnel No3 on the DCR - all teracotta made on site

But Coromandel holds a secret which we added to our schedule almost as an afterthought. Tucked away just to the north of the town is the Driving Creek Railway and I can think of several readers who would love it (David, John and Michael I am thinking of you!). It was the brainchild and passion of the late Barry Brickell, a potter and train enthusiast. A lot of people dream of a train set in their garden but how many buy 85 acres of steeply sloping hillside and then spend 33 years laying 3km of 15" track up 100m using trestle bridges, spirals, tunnels and five reversing points, some built out on trestles. 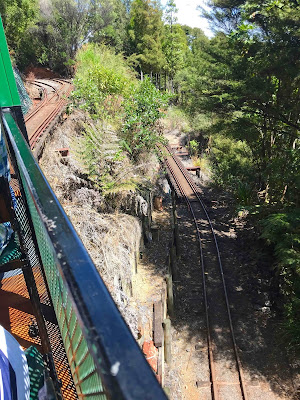 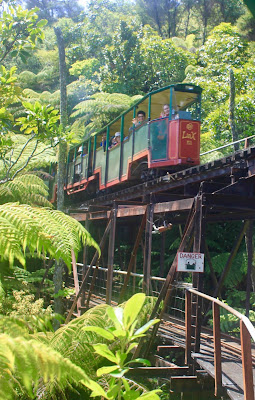 And not only did he lay the track, he also built all five engines which use hydraulic drive to all wheels to propel them to the "Eyefull Tower" at the top, without resorting to rack and pinion. 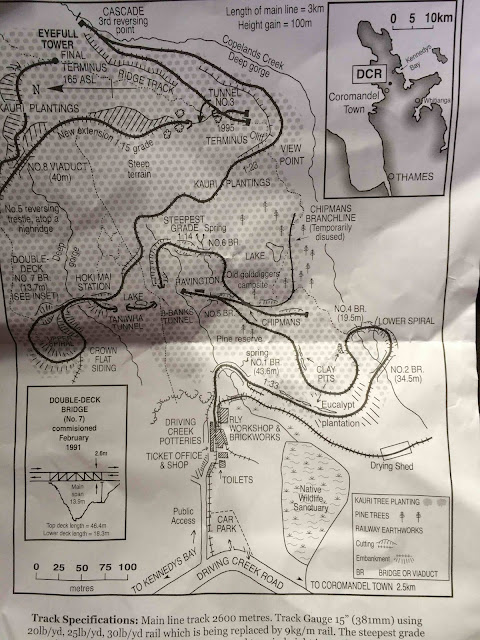 And a map for the real enthusiasts!

At first sight the $35 ticket price seems high for 3 km of track,  but what a ride up the old gold prospectors stream, and what a view over the bay towards Auckland. If you ever make it to Coromandel do seek out the Driving Creek Railway, its a gem.

I do like an unusual railwayy. One to add to our list when we visit NZ again and do the North island.

Well that looks amazing. A bit ambitious for me, I've not even got my hornby set to work! One to add to the list for when re re-visit NZ and do the Norht Island.