We indulged in a couple of pints of Ghost Ship at the Nags Head in Abingdon, a pub conveniently located next to the river bridge which also served good quality food.

Our Thames schedule isn't exactly stretching as we have two weeks to cover the hundred or so miles down to Brentford, and our next rendezvous is with Dutch Barge Edith at Beal Park on Tuesday. We there have effectively two days of travel and time for a one day lay over which in this trip will be spent at Wallingford.

This is the fourth time I have navigated the Thames and it has always been a downstream run. With a butty strapped to the side our speed is much reduced and I am always curious to know how much current assist we are getting. Our typical canal speed in 2.3mph but on the deep dater lock cuts where the water is still we seem to manage about 2.8mph, compared to the 3.8 we achieve on the open river. On that basis the average current is about 1.0mph, rising in the narrows / shallows beneath the locks. I really don't fancy an upstream journey which would take twice as long and use three times as much diesel.

The journey down river was made a bit challenging by the very high winds which howled over the flat water meadows, creating a distinct chop as it crossed the strong downward current. Speaking of current, I was nearly caught out at Clifton Hampden Bridge where the current flows at an angle to the arches rather than straight through. I got myself all lined up only to find myself very close to the left hand pier and in need of an unexpected burst of throttle to get us in without a bump.

On the subject of bumps, one of my sternest steering challenges cropped up below Days Lock. Just below the lock there is a landing jetty which provides access to a little used elsan point. The issue is that the fast flowing stream flows both under and past the jetty and a rate of knots and this is a problem when approaching from upstream. It is really hard to both stop and come alongside without a jarring crash. This is doubly complicated when a butty is strapped to the side and two years ago I made a very heavy landing. This time I made a better fist of it and came to a fairly dignified stop, but encountered hassles getting away later on. The flow presses you onto the jetty and the trees jut out 8 feet at the end of the walkway, so its a case of getting the bows out and then a  big blast of acceleration to try and get free into the stream before the butty is all tangled into the undergrowth.

Benson lock is the next obstacle, with a strong side on weir stream trying to push you into the trees on the other side of a very narrow navigation channel. Fortunately, nothing was approaching upstream and we could use the full width of the river to ferry glide across. 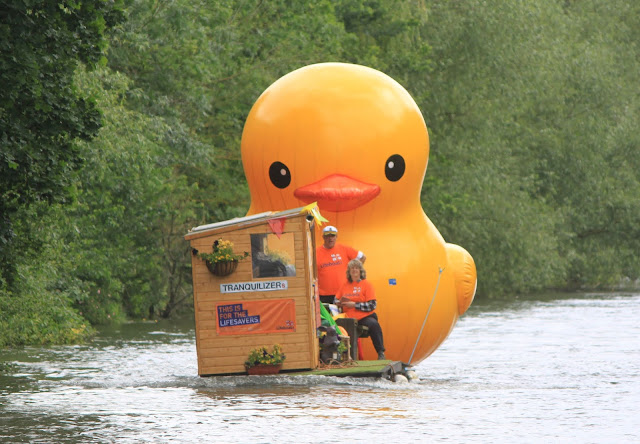 It was about here that we saw the most enormous yellow duck approaching, which turned out to be some sort of fund raiser for the RNLI.

Wallingford moorings were pretty full but, as in Abingdon, there was one 50ft gap on the town side of the river. The challenge here was the presence of a shiny (expensive) plastic boat at the downstream end and there is no way I want to bump into that. We travel with the butty on the starboard side of the motor and its not really practical to moor with the butty on the bank side so we needed to turn around. With so many boats present we opted to go below the bridge to wind and its always a bit hairy to be dead in the water going broadside on in a fast stream. But we made it only to have to punch a fierce flow  back up under the main arch.

We made it back to the mooring, helped in by the narrowboat moored immediately upstream - a very welcome extra pair of hands.