The day of the locks
The day started with a grim weather warning, which the BBC signify with those grey clouds and two raindrops. Not a good prospect for the locks which were to follow.

We woke early and worked down the last six locks to the Grand Union sump pound where it passes through Leamington Spa and Warwick and over the upper reaches of the Avon.. 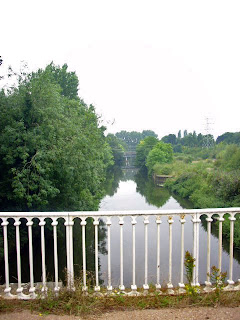 The canal does not so much visit Leamington as pass it with a glancing blow. From the canal there is little to indicate the rather lovely Georgian Spa town which well deserves a visit. All traces of industry have been obliterated and been replaced by non descript "warehouse style housing" which isnt dating too well. Warwick follow quickly, and again fails to make much impression from the water, but the ancient town with its fantastic castle is well worth a visit. However, we didn't stop on this occasion save to pause at Kate Boats and fill up the diesel tank, all the time hoping to see another boat heading in our direction with whom we could share the Hatton locks. No one arrived so we made our way to the foot of the flight and hung around for another 20 mins while the water tank was refilled. Still no one came up behind us so, at 12.00 noon we started up the Hatton 21 on our own. 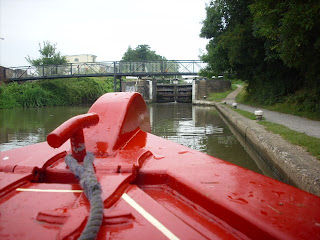 The flight is relentless with the locks coming more and more frequently till in the end there appears to be a hill completely covered in masonry and balance beams. As we were running solo we opted for the slower but less exhausting single side approach, using the sluice streams to hold the boat snugly against the side of the lock. For all their size, the locks are 1930's hydraulic perfection, with all the ground paddles opening quickly with 22 or 23 (stiff) turns on the windlass. This releases water into the lock via three underwater appetures which fill the chamber in about 3 minutes with a minimum of fuss (2 mins if both sides are operated). These magnificent locks are a fortunate legacy from the 1930's depression, when canal and rail schemes were used to create jobs. I was particularly impressed that the unique paddle housings are all intact and working after 75 years. 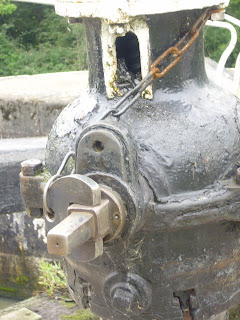 Most of the locks were in our favour so, with Tilly steering all the way, Belle lockwheeling on ahead and the Capt working alongside the boat. We managed the flight in three hours which we felt was petty good in the circumstances. Our completion of the flight and the continued absence of the forecast rain was celebrated with ice creams from the refreshment kiosk. 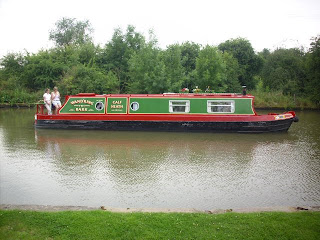 With the Hatton flight being such an obstacle it wasn't surprising to find the reaches above to be very quiet. The towpathless Shrewley Tunnel takes the canal right under the village onto which Belle ventured via the old horse path over the hill, trying to find a post office. The path over the top is very indistinct and the small foot tunnel back down the other side was tricky to find and so dark inside that she had to grope her way through holding onto one slimy wall. The canal tunnel is also very wet and WB suffered numerous drenchings, particularly at the northern end where water spurts in horizontally under pressure. 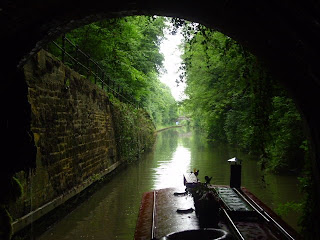 Moving on you come to the cuttings and embankments of Rowington, which are grand and comparable to those found on the Shroppie, complete with lofty views and unstable tree lined cuttings. Kingswood Junction, our planned destination for the day is a place of contrasts. From the Grand Union is entrance is marked by a plain and unassuming hump backed bridge, which gives no hint to the unique triangular junction which lies behind it, all with choices of locks for northbound travellers. As it was still early we decided to press on down the South Stratford Canal, beyond the roar of the M40 and to a secluded mooring spot at Yarningale Common.

After all the industrial efficiency of the Grand Union, the slowness of the Stratford came as something of a surprise. All the locks are stiff and mostly filled / emptied by one small paddle, resulting in a rate of progress unlike that found anywhere else on our travels. I completed this route as a teenager in the 1970's, when the canal was newly re-opened and still under the control of the National Trust. The channel is a bit deeper now and the gates less rotten, but the speed of filling and emptying hasn't changed a bit!

As our progress slowed the noise level rose to deafening howl at lock 27, passing under the M40 where the noise was so great we had to shout to make ourselves heard. The drone of the tyre noise dies away as the canal pulls away to the south and is merely a faint hum by the time you reach the Fleur de Leys, a popular canal side pub. Don't miss the lovely barrel roofed lock keepers cottage beside lock 31 - gorgeous. 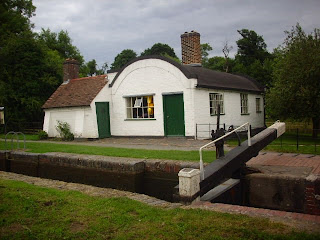 We favoured a quiet mooring so moved on a bit further to a wooded site just below lock 32. Here we were sheltered from the wind with panoramic views over the meadows. All very reminiscent of Dibley no, no, no - yes!.