Out itinerary indicated a night near Wood End Lock but the volume of traffic together with the late start on Saturday had already pushed us three hours behind schedule. In the event we were behind right up till the last day! 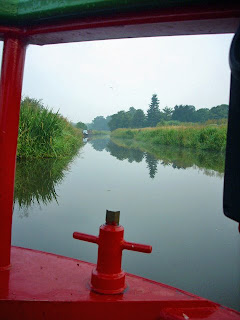 Capt Ahab was keen to stay within shouting distance of the timetable and was awake with the larks at 6.00am. A 6.30 start paid dividends and we had the canal to ourselves for three hours, making excellent progress right through to Seethay.

Armitage is always an interesting stretch with the narows at Plum Pudding followed by Armitage Shanks, the toilet centre of the universe. 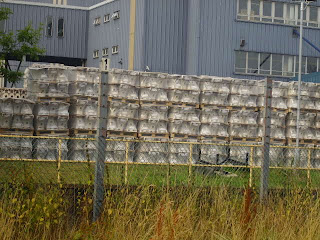 As we passed under the A38 we ran up behind a beautifully cared for Piper (hopper windows et al). Unfortunately, the skipper was unfamiliar with his craft and insisted on futile attempts to steer his craft by paddling with the tiller. This frustration was short lived as he pulled into Seethay Wharf and normal progress was resumed. But not for long. Soon we encountered a a very slow trad which progressed at such a crawl that we had to repeatedly disengage the drive to keep our speed down low enough.

A brief technical aside here - WB is a shortish 42 footer with a good 38hp Beta engine mated to a slightly oversized prop (17 X12) which results in a good turn of speed, which is fine on rivers (7 knots on flat open water), but renders it unable to maintain an ultra slow crawl.

I rarely rejoice in the suffering of others but on this occasion, after 45 mins of dead slow / neutral, I was delighted to see the boat run itself firmly aground just beyond Fisherwick. As we were fairly close at the time the skipper readily agreed that we should pass.

Harvest has come early this year, with endless fields of wheat and rape ready to be collected in. Combines were already working flat out, droning on till the dew of sunset increased the moisture content to unacceptable levels. 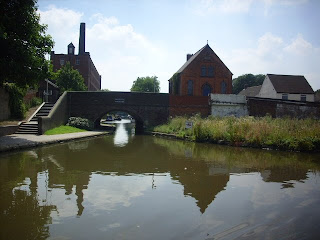 Fazely, like Fradley, was quiet with most boaters moored up in whatever shade they could find. Glascote locks were a furnace with heat radiating back up from the brick surround. These locks, like most on the Coventry, are slow fillers and we were dripping with sweat by the time we cleared the second one. 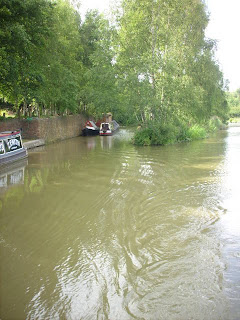 The long pound through Polesworth are surrounded by old coal mines, which closed in the early 60's and with them went the last trade on the canal. Here and there there are the remains of wharfs and jetties, all overgrown and crumbling and some now used as moorings. 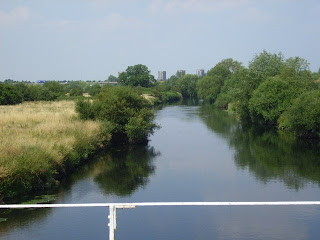 Having crossed the Anker at Tamworth, the canal runs alongside the railway line, playing kiss and run - one minute close together and the next moving away, but never so far away as to avoid the hissing whine of the Pendolinos heading for Euston. It was good to be outside looking in rather that inside looking out, which is more usual for a corporate drone bee.

With 10 hours under our belts and a thunderstorm looming we decided to call it a day at Bradley Green, where we topped up with water and then reversed back under Bridge 48 to moor in the shade of a stand of trees, just beyond the winding hole. 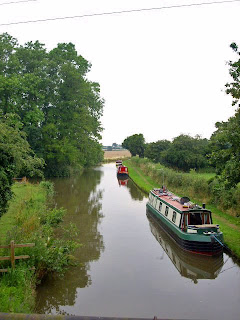