This was the best of days and the worst of days. Since our spring excursion on the Trent, Belle has indicated a preference for a canal trip, preferably with wall to wall sunshine thrown in. I could see her point, the Trent was a bit monotonous and in the two years we have had WB, we have never had a hot and sunny trip.

Today we had both, in spades. It was roasting with the thermometer just under 30 degrees and the steel roof too hot to touch. There wasn't a cloud in the sky or a breath of wind to take the edge of the heat and to cap it all, the canal was heaving with boats and progress was slowed to a crawl down the Staffs and Worcester. Its amazing how waiting for locks under a relentless sun seems to lake longer than waiting in the rain. I must remember this next time it tips down. 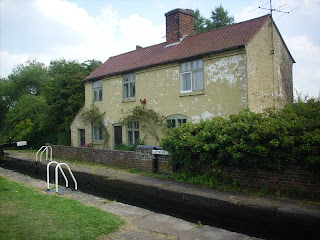 I shouldn't grumble, things were worse elsewhere and northbound boats reported a failed ground paddle at Colwich Lock which caused a three hour delay for northbound traffic. The tail back was still an hour when we descended at 7.00pm.

Tixall wide was its usual busy self with boats lining the south bank, including the Phyllis May - probably the only narrowboat with aircon. The Darlingtons were sitting alongside in the shade and gave a cheery wave as we passed. 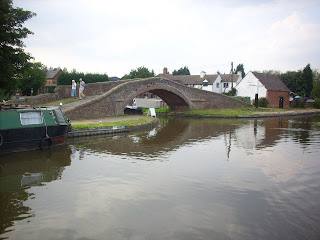 We were fortunate to make it to the Anglo Welsh boatyard at Great Haywood just as they were packing up for the day. They were good enough to give us a much needed pump - out as the odour was causing something of a mutiny among the crew. 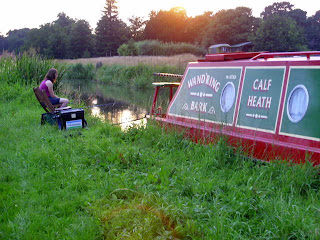 By 7.30 we abandoned our target of Kings Bromley and instead moored in a remote spot by Bridge 69, opposite Bishton Hall School from which an outdoor musical event was just audible. At this point the roads and railways pull away from the canal leaving boaters alone with the meadows, the river and the bleating sheep. The day was concluded with a bankside BBQ and a spot of fishing before the light failed and we retreated for the first episode of Vicar of Dibley, our chosen entertainment for the trip. 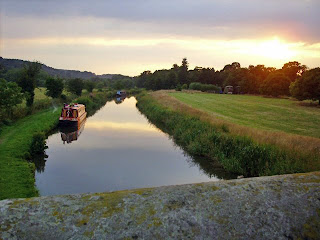