What was it Lou Reed sang - long before the charity version butchered it? Ah yes: "O What a Perfect Day".... That just about sums it up.
The forecast for sunny spells turned into wall to wall sunshine, with the hint of a cooling breeze to take the edge off the heat. Like I said - perfect.

The Rugby moorings are not the best with a fair amount of traffic noise during the night. That said - its not the worst urban mooring by far. We were off again at 8.30am through a pleasantly wooded section to Hillmorton Locks which are all paired up in readyness for through traffic to the Grand Union beyond. We stumbled upon a group of boaters staring glumly into the bottom lock as though baleful glances would cause the dropped windlass to re-emerge from the turbid waters. Two boats were travelling together and they only has two windlass's between them so their progress was halted whilst the offending crew member was dispatched to Hillmorton Boat Services for a replacement. He decided to buy an extra one as penance and emerged huffing and puffing up the towpath as we set off. It appears that the boats were completing the Leicester Ring and are fresh back from a trip down the Tidal Trent, complete with an impromptu overnight stopover on the Normanton Sunken Islands! 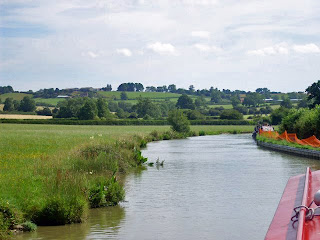 WB therefore leaped ahead and became the first boat down the cut that morning. We made good time down a desolate stretch to Braunston passing some wonderfully isolated moorings at Barby, all with privately owned parcels of land some of which appeared abandoned. There moorings have great views over the fields of Warwickshire. 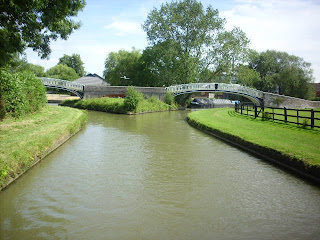 Predictably, the boating traffic built up as we approached Braunston, canal capital of England. Moorings were, as usual, in short supply but we had no plans to linger. Instead we bore right, through the first Iron roving bridge which carries the towpath into the village. The next section between Braunston and Knapton carries both the Grand Union and the Oxford Canals but there is no doubting which canal it really is - the Grand Union. The bridge holes are wide and the banks are all piled in distinctive 1930's concrete. This is a very pretty area, running between rolling hills to Knapton Junction (AKA Wigrams Turn). Atlas and Leo were moored up at the junction all freshly painted in classic BW blue and yellow, looking like they were just waiting for their next load. 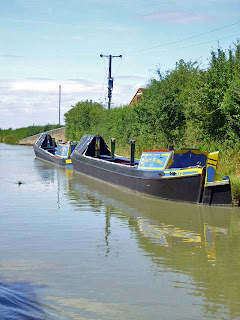 We turned north into the Grand Union "proper" whereupon it immediately acquired a quieter, more remote feel. THis is probably an illusion given the huge marinas at Wigrams Turn, Calcutt and Ventnor Farm. For all the boats moored up, few were on the move and we quickly found ourselves at the top of the 8 locks at Stockton. 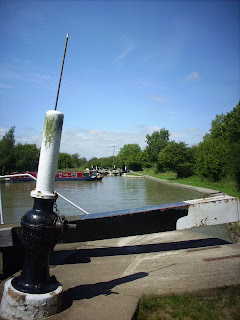 By good fortune we arrived at the same time as Susan of Kate Boats. After a brief discussion we decided to breast the boats up, with the skipper of Susan navigating both vessels and the Captain overseeing matters on the shore. 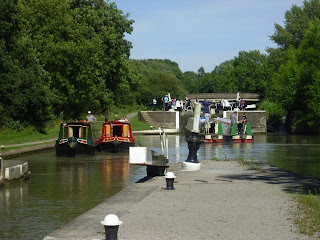 The wind died are we descended and we got hotter and hotter, with arms and legs burning in spite of generous applications of sun cream. 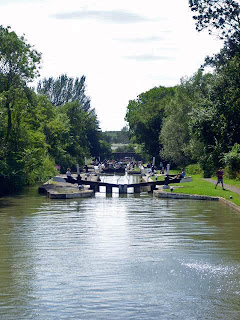 Part way down proceedings assumed a carnival atmosphere with a group of 24 from Sudbury Baptist Church working two Willow Wren boats back to base. As we approached the last lock Belle suggested she take a couple of pint mugs to the Blue Lias to refresh both Captians and returned with a couple of pints of Tribute - cracking on a hot day. The younger members of the crew too exception to this treat and were only pacified when ice creams were purchased at the bottom lock. 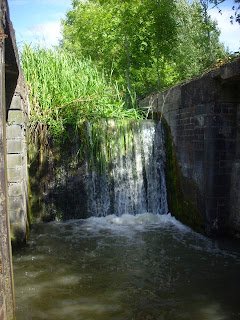 We uncoupled the boats to navigate the known narrow bridge near the Blue Lias but didn't mention the one before Itchington Bottom Lock. It was attempted breasted up with disastrous consequences, holding up the traffic for five mins whilst they were untied and prised out of the gap. Tilly was steering at this point and did a great job negotiating the many obstacles.

Susan stopped off for the night at the Two Boats but we continued, re-watering at Bascote Wharf and then descended the Bascote staircase pair and the following two singles. 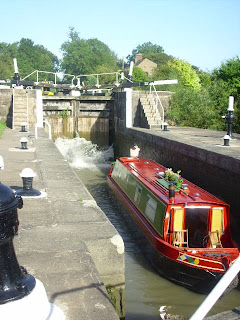 We finally called it a day above Welsh Road Lock and enjoyed a BBQ in the shade of a tall hedge. 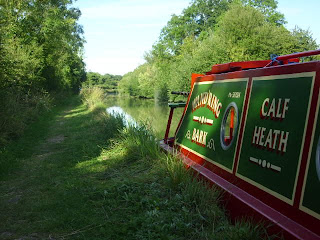 Tilly and the Ahab fished with the last of the maggots with a score of: Tilly 4 perch - Capt 0.