Barging into France
By Gerard Morgan-Grenville

I owe a debt of gratitude to Jim Davies of nb Starcross. His original review of Barging into France prompted me into buying a copy of its sequel, Barging into Southern France. If that wasn't enough, he then kindly agreed to do a swap with me and the above book was waiting for me when I got home from work last Wednesday evening. Two days later and I had finished it, spellbound by a the tale of an epic European boat trip undertaken nearly forty years ago. 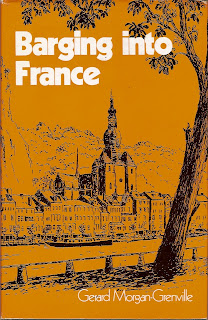 Whilst I rated the second book "very good" this introductory publication was even better - A* in fact.

All my questions about the nature of the boat and how he came to be in the middle of France were answered in a beautifully crafted narrative. He made it plain that the tale was about the boat, Virginia Anne and the places she visited, not about the character of her crew.

His account of the first weeks travels in sub zero temperatures and against rivers in flood was gripping, and he displayed a remarkably sanguine approach to boating life in the face of a need for a new engine, a new propeller and the installation of a new stern gland all in his first six months of ownership!
Equally shocking was the fuel consumption of his 150 ton craft. In it's original state it operated a pre war American petrol engine, which produced a rated power output of little over twice Wand'ring Bark's 38hp. However, its fuel consumption rate was slightly less then one mile per gallon! It's a good job this journey was undertaken before the escalation of oil prices in 1973.
His writing style is slightly dated, somewhere between Pathe News and contemporary but wonderfully evocative. He selects his words with care, applying then to his tale like colours from an artists palette, building up layer upon layer till you find yourself immersed in the sights and sounds which surrounded him.

Don't take my word for it:

"...One morning we had weighed anchor at about half past six. It was one of those days when all the world knows it is going to be as hot as hot can be. The dew was exceptionally heavy and the mist so thick that we had to wait some time for it to clear sufficiently before we could proceed. The water was absolutely still except for the occasional splash of a water rat or moor hen.
Rounding a bend, I saw an unforgettable scene from a Chinese print: two fishermen at either end of a punt, silhouetted against a silver mirror of water and a background of mist, completely motionless. On either side the still reeds, their cuneiform leaves rising ladder-like from the water. A little further and the mist lifted to reveal a meadow mauve with autumn crocus; and everywhere the grey green willows of Corot, the bending rod of the August fishermen piercing their foliage...... Time to stand and stare, time to converse, time to be polite. Complete peace. And flowers everywhere: the banks purple with loostrife, mallow and willow herb. Old stone walls, ancient mellowed tiles, windows aflame with potted geraniums. We seemed to be the only things moving."

I completely endorse Jim's views of this book. It is a period piece which has stood the test of time and is a "must read" for all waterways enthusiasts - even if your cruising horizons are limited to the British waters.
ISBN: 7153 5456 6
Posted by Andy Tidy at 7:00 am

Because of you I have saturated myself with all things Gerard Morgan-Grenville. Have read Barging into France (not got southern France) read his autobiography - interesting man who started the C.A.T. in Wales and various other endeavours. Have got Burgandy and the Sahara to look forward to! Truly inspiring. Thanks (pass on thanks to Starcross!)

Bobcat:
I am so glad you have enjoyed the books. They may be old but they deserve wider appreciation.
Starcross may have a copy of Southern France to borrow in a few weeks time!
One question? Which canal did he use across the Sahara!!!!!!!!!!!!!!

I think you will find you have a spelling mistake! Camel not canal.

And of course by Land Rover

So it still counts towards a waterway travel book with a little imagination!

Another good book is Half-Safe 'Across the Atlantic by Jeep' by Ben Carlin if you like your true adventure stories. I was put onto this by nb.libertybelle

Kath
The book sounds good - I will trawl Amazon.
I thought that your reply across the Sahara would be the Suez Canal - but on reflection its a bit too obvious!

You can have my copy.

i put gmail but it should be googlemail