Imagine riding along the towpath of Regents Canal and suddenly being confronted by a yawning chasm, complete with a waterfall in the middle of the towpath. It’s enough to make you lose your balance. This was the scene facing London’s cyclists courtesy of a piece of BW commissioned pavement art by Joe Hill and Max Lowry, who have been plying their trade on the streets of our capital for the last five years. I love this photo of a cyclist nervously peering “down” into the abyss. 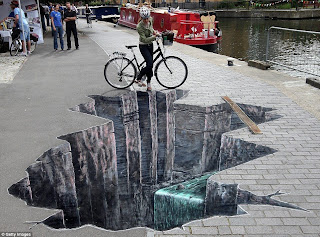 It is part of a serious campaign to get cyclists to take more care as then travel along the towpaths, some of whom seem oblivious to the safety of other users.
Is this a good use of resources? Well, like the 3d effect of the street art, it depends how you look at it. Viewed from above it makes no sense taken from the right perspective the results come dramatically into focus. It’s a bit like BW’s funding problems – viewed straight on, the expense of the system is high for a limited number of boaters, but step into the millions of towpath users shoes and the cost benefit equation is radically transformed.
Posted by Andy Tidy at 7:00 am