Deals on Wheels
13 June 2009
It's been a week for motor cars in the Ahab household.
During last weekend's fishing trip I discovered that one member had a Peugeot 406 for sale, and I mentioned that it might be a suitable vehicle to replace Belle's ageing Peugeot 306. So we went round to see it on Monday evening and it soon became clear that it was too big for her needs. 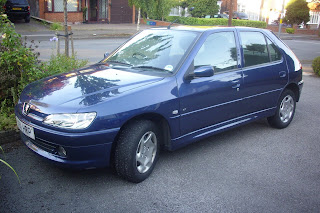 306 RIP
But this action put the idea of replacing her X reg car firmly centre stage in my mind, and the following day I spent some time on Auto Trader looking at what is what in the market, and what we could get for our money. That evening discussions went further and it was decided that what Belle really wanted was something similar to the current car, just newer, more reliable and more fuel efficient (diesel).
I therefore returned to Auto Trader on Wednesday with an improved focus, and then went out of the office to buy some lunch. As I walked along the street I literally bumped into a parked Peugeot 307 HDI with a for sale sign in the back. It was uncanny, it was the exact car I had been looking for - right model, right engine, right age, right mileage and crucially, the right price. The owner soon showed up and gave me an inspection there and then. To cut a long story short, we came, we saw, we purchased.
So that left Belle's old car sitting forlornly on the drive. I gave it a good wash and brush up and posted an advert on Auto Trader on Friday evening. Five photos for a two week run, all for £9.99! The process was simplicity itself - a bit like e-bay, and I cant speak highly enough of their service.
Well, today (Saturday) I was out on the boat enjoying the summer sun. Well, enjoying it between endless phone calls about the car. My poor Blackberry was rung out of its holster and all I could do was tell people that I would be home after 6.00 pm. We returned at 5.50pm and Belle drove off (in her new pride and joy) to pick up Jeff and within 15 mins two callers told me that they were on their way for an immediate viewing.
Imagine the scene: Belle and Jeff return to find a melee of five individuals on the driveway. Two parties have shown up at exactly the same time! I had to do a combined tour, and then act as chauffeur to the two key individuals - taking the car round the block to demonstrate its mechanical poetry in motion. Then came the funny part. Both guys were interested in making a purchase. They had both planned to try and haggle me down but found themselves in a weak position. They then both offered the full asking price! What were we to do?
I tossed, it landed, I revealed the face and.... heads it was! The lad got the car. The losing party had the good grace to have a laugh about the absurdity of the situation and we all agreed that in all the years we had all been buying and selling cars , none of us had ever come across a situation quite like this.
So, the Peugeot 306 is dead, long live the 307. Three cheers for Auto Trader and three cheers for the cash in my wallet.
Result!
Posted by Andy Tidy at 10:11 pm