Flyscreens for a narrowboat

I like most things about boating, but chilling out with a beer at the end of a long hot summer's day is right up there at the top of my list.

However, this enthusiasm for balmy evenings on the water is somewhat undermined by the need to share the experience with all manner of flying bugs. Some buzz loudly, others whine on your ears as you try to sleep, but worst of all are the nasty little biters. Fortunately, they tend to prefer Belle, but her reaction when she wakes covered in bites is something else altogether! 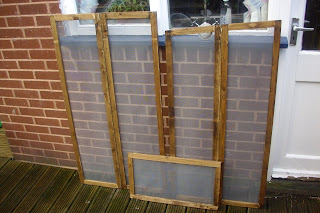 The end result, stained mahogany.
Belle has taken exception to these airborne invaders and rather than consume half my salary on aerosol products with names like Doom and Raid, and further denude what little remains of the ozone layer, I have decided to invest in some flyscreens for Wand'ring Bark. Of course, to merely buy some flyscreens would be too easy, so a DIY approach was called for. This has resulted in screens for both the front and back doors, at a price I can afford. 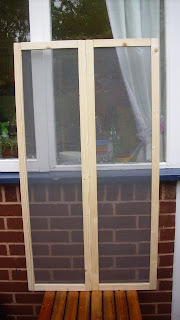 I was pondering what sort of netting or gauze I could use when I remembered the power of the Web. One quick search on Google using the ford "flyscreen" quickly led me to "The Flyscreen Company". Its name suggested that I was on the right track and I promptly ordered the minimum amount of polyurethane coated glass fibre mesh. 5m x 1.2m for £24 plus P&P which duly arrived a couple of days later. 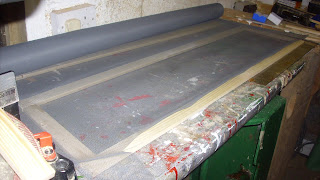 The product is great - virtually unbreakable. I can't break even a single strand with my bare fingers. This bodes well for the life span of the finished product. I then called in to the local timber merchant and bought 15m of softwood batten for the frames. Great - all set, except I miscalculated and forgot that I would be using two layers of batten with mesh sandwiched in between. Der...

So, 30m of batten, a box of screws, two metres of flyscreen, a couple of metres of piano hinge, some mahogany wood stain and some varnish and you have it. The ultimate flyscreen for a narrowboat.
Total cost of materials used? - about £35.
No bugs, no bites and most importantly, no more bitten Belle in the morning.
Posted by Andy Tidy at 7:00 am

BigJohn
They fold in half which lets me store the front door screen behind the fire (assuming its too warm to need to use it!) and the back door screen again folds in half and can be stored at the back of the wardrobe - which backs onto the rear cabin bulkhead.
Whilst they do fit, they havn't been tested in anger yet.

On re reading this - 5 years down the line and the screens are still working perfectly. But have just realised that we have fitted a hatch so I need another fly screen! Good job I have lots of mesh left over.

awesome post. Such a nice blog i really like what you write in these blog i also have some relevent information about