A benchmark of distance travelled

A benchmark of distance travelled

Getting a perspective on the distance travelled on any journey is never easy when you are still moving. Whilst this is true of physical movement, it is even more so with regard to other journeys in life.

The changes made to Wand’ring Bark represent a three year journey and it is sometimes hard to appreciate what has been achieved. It's only when I see the early photos of our trips on her, or refer to the repair and maintenance log that I see all the things that have changed, and hopefully improved.

A recent encounter with a sister boat caused me to reflect on this process. I had seen her earlier in the season, somewhere near Kinver, but I recently spotted her again, moored up near the Fox and Anchor at Coven. She is exactly the same length, with the same arrangement of windows. There are just a few details which are different, like the height of the rubbing strakes and the location of the Morse control, which suggests she may predate Wand’ring Bark by a year or two, but she is materially the same. She even sports the original not particularly beautiful maroon paint job that once graced the hull of WB. 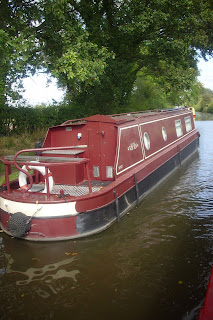 NB Bella - twin sister of WB in a 'before' state
The boat seems to have originally been called Charlotte James, but the transfers bearing this insignia have been removed leaving a brighter silhouette on her flanks, a bit like an ex post office van. She now proudly bears her new name Bella on her bows, where Wand’ring Bark has her more traditional decals.

Both boats were fabricated by Floating Homes of Northamptonshire, who are not fashionable boatbuilders by any standards. However, by the time they built WB about 7 years ago they had rolled about 300 hulls off the production line and, to quote our surveyor, “had pretty much got the gremlins out of the system for a budget boat builder”. Floating Homes are actually part of a larger engineering concern which built, among other things, the Millennium Bridge in London, so they should know a thing or two about welding sheet steel.

You get what you pay for and we acquired a well fabricated three year old 10 x 6 x 4 hull and a little used Beta Greenline 38hp engine, with an interior that was functional but with scope for improvement. Floating Homes have a very fixed design format, which includes a few idiosyncrasies one of which I was unable to live with. Take a look at the scrolled hatch cover on Bella. I hated this embellishment from the off and it took all of five minutes with angle grinder to reduce this to a minimalist 5mm lip. I get the feeling that this feature is a ‘Floating Homes signature’ but why add it? Its curves are not echoed elsewhere on the boat and the ‘sticky up bit’ just got in the way of ropes, trees and low bridges. I am not sure we would have made it under Slaithwaite Bridge with this ferrous folly poking its head up from the cabin top.

Having said all the above, the fabric of the boat had performed very well during its first seven years on the water and, with lots of hard work and TLC, both the interior and exterior are moving towards the vision we had way back when we bought her. 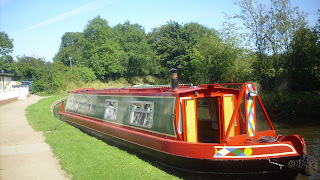 Wand'ring Bark as she is today
Like boating itself, the journey towards the completion of Wand’ring bark is not to be hurried. The real enjoyment lies not in reaching a planned destination but in the journey itself. However, it is sometimes good to stop and reflect on progress achieved so far – a bit like life really.
Posted by Andy Tidy at 7:00 am

Hiya,
That's just the sort of information that a prospective buyer needs to know about a builder, but which is hard to find.
I can't see the scroll on Bella - the photo doesn't enlarge!

The scroll is on the rear hatch cover - but I admit that it is a little small in the photo! I dont know why the photos dont enlarge - it must have something to do with how blogger publishes them. Does anyone have an answer?

Beautiful houseboats - much more mobile that most of our floating homes in Seattle.

Seattle Houseboats:
I have always imagined that your housboats were like the one seen in "Sleepless in Seattle" - which was rather wonderful.