My reference to Northern Pride has nothing to do with Newcastle's Gay Pride Week, but everything to do with the narrowboat of the same name, and it's newly married crew. 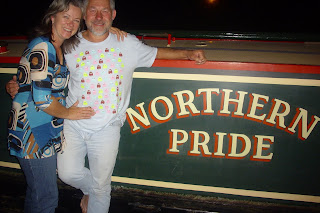 Barry - sorry I lost the top of your heads - I couldnt see thing!
I have followed nb Northern Pride's movements round the country over the last few months, enjoying their mix of quality photography and witty writing, but never considering that there could be any link between us.

I was therefore surprised to get an e-mail from Belle (whilst at work - we do communicate verbally when we are in the same house!) to tell me that she had 'found' an old colleague from her midwifery days on Facebook, and they were travelling on a narrowboat, and that they run a blog, and that they are currently near Birmingham, and that we are going to see them on Tuesday evening.

Now these blind meetings with old friends and colleagues can sometimes be a bit hit and miss, but Sandra and Barry's boating credentials were strong so this was an opportunity to be embraced with open arms. So, Tuesday evening found us marching across one of the main roads out of Tamworth armed with beer and chocolate pudding, seeking out a gap in the hedge to reach the towpath. Not a typical start to a dinner party!

Sandra and Barry are a great couple, who are about to return to Barry's native New Zealand. It's got to be a tough life - a summer cruising round the English waterways and then back to New Zealand for their summer.

Sure, there were lots of reflections of the glory days of Midwifery past and the the woeful state of the industry (industry? - well they do call it labour...) today, but there were also lots of watery tales and they were huge fun to be with.

Sandra and Barry, thanks for a great night. Have a good trip back to New Zealand and don't neglect the blog.