Return from Brewood
13th September 2009
It was one of those magical mornings when I was roused from my slumber by the distant rhythmic thump, thump, thump of a very slow running vintage engine.

I crawled from my pit and shivered into an early morning mist, which was enveloping WB like a close fitting shroud. Last night’s clarity has given way to an autumnal fog, encrusting the cobwebs with a lattice of glistening jewels and cutting us off from everyone but nb Lynx, a traditional working boat moored in front of us. 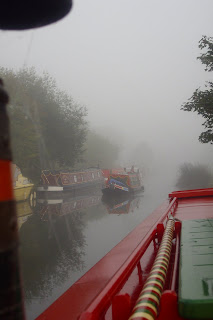 Erik Bloodaxe emerges from the murk

Gradually the thump, thump, thump grew louder till at last the ancient bows of the tug Erik Bloodaxe emerged from the murk, great gout's of diesel smoke erupting from her huge exhaust. This is a craft I have seen many times, originally at Gailey but more recently at Brewood, but one which I have never seen on the move.

Whilst this was a carefree weekend to ourselves, we still had a timetable to keep. Jeff, you see, was at a youth camp being held at the Laches Centre in Coven, a name which the ardent bridge spotters among you will recognise as a canal side location. Rather than trek all the way back into Birmingham to pick him up, we had arranged to meet at the canal frontage at 2.00pm, necessitating a 10.30am start. 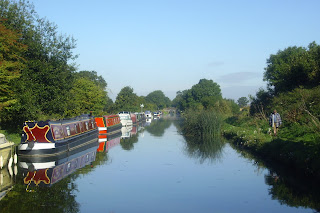 A perfect morning in Brewood
Given the absence of through traffic I didn’t anticipate seeing many other boats, but I had forgotten about the Wolverhampton Boat Club outing. It seems that they that booze together cruise together! It was a veritable Paddy's Market with boats winding at Chillington Wharf, all moving to and fro through the adjacent narrows.

Just beyond their impromptu gathering point I had spied a couple of BW work boats tied up on the offside bank, clearly part of the ongoing tree felling programme. This usually means a ready supply of logs and, with winter approaching, an extra ton of timber would be most acceptable. On the outbound leg I had peered into their holds and was disappointed to note a distinct absence of pre cut lumber. However, there appeared to be scope for foraging on the bank so I pulled alongside and, armed with a bow saw, dived into the brambles emerging with a dozen thigh thick trophies about two metres long. These were loaded into the bows till the well was completely full, much to the amusement of the passing boaters. 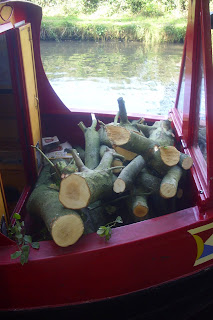 Free logs
Wolverhampton Boat Club was a hive of activity with its members busy shutting up their boats. Among this group was the crew of nb James Arthur, recently photographed by Granny Buttons ‘nearly hitting a grain barge’ on the Trent. I asked about the incident in all innocence, and was met with barrage of good humoured outrage and denial. Apparently, they had been nowhere near hitting the craft in question and, is seems, its was all a matter of perspective! 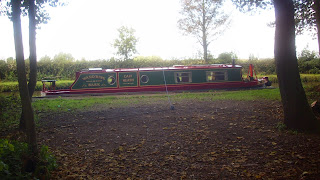 We timed our return to perfection, our bows kissing the mooring at Laches Centre at 1.58pm and adding a very weary son to the crew for the last half hour. Oddly, he was resplendent in a very tight fitting girls tee shirt in brilliant fuscia pink. There are some areas of a boys life that are best left uninvesitigated….

And so to the end, past an unusually crowded Calf Heath Marina whose rapidly growing clientele were drinking in both the ale and the last of the summer sunshine. All in all a very enjoyable weekend during which we achieved a degree of carefreeness (my new word) to which we aspired in our New Years resolution but to date had failed miserably to achieve.

Love your blog Andy (and Helen!), excellently written! Will follow more closely now I know who you and yours are! Sandra