Lock Keepers Daughter
by Pat Warner
A chance meeting with Chris and Maralyn of nb Nebuale whilst flooded in at Gloucester Docks identified a shared interest in old waterways books. Chris raved about the Lock Keepers Daughter and as we last saw then striding off up the Tardebigge towpath to see Pat Warner's childood home he promised to lend it to me. I was therefore delighted to find in under the stern cover at the start of the Caldon trip. 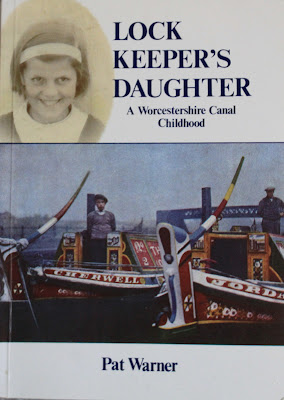 This is an autobiography published in 1896 covering Pat's childhood years in Reservoir Cottage during the 1920's and 1930's. Ther father John was a long term lock keeper who endured a string of family tragedies which saw his wife and most of his children die before Pat was three. Pat's remaining sister was dragged back from Scotland to keep house and share in a life of absolute poverty. Poor in money but rich in so many other ways.
The location of their tied house led all sorts of characters to their door. Travellers on the towpath, boaters and the many anglers who flocked to the fish rich reservoir.
Its a haunting tale of a time utterly gone, putting me in mind of Tom Rolt's wistful longing for a simpler agrarian life, which is a recurring theme in his famous wartime canal books. As it happened, Rolt lived out the war aboard Cressey at Tardebigge Wharf and was also known to Pat at the end of her adolesence, sharing both a location an a perception of a rapidly changing world.
The story dosn't conclude but rather offers an intriguing insight into a slice in time. Not a hard read but very rewarding.
Chris and Maralyn - thanks for the loan. The book is back on Nebuale all safely sealed against the winter weather.
Posted by Andy Tidy at 6:00 am

This may or may not be relevant news for you organisation, but I thought I'd send it anyway. My Grandmother, Pat Hill (Warner), was the author of 'The Lock Keeper's Daughter'. She sadly passed away last week, in her home surrounded by family.

Janette
I am very sorry to hear of Pat's death. Another loss to the heritage of the canals. I am so thankful she wrote her book and allowed us to continue to share her insights. My thoughts are with you all.
Andy