We spent an uneventful, if slightly edgy Friday night at Hackney Marsh. There were lots of boaters around so there was safety in numbers I guess, but of all the stops on this trip this mooring felt the least secure. Subsequent discussions with local boaters suggests that the area is OK. 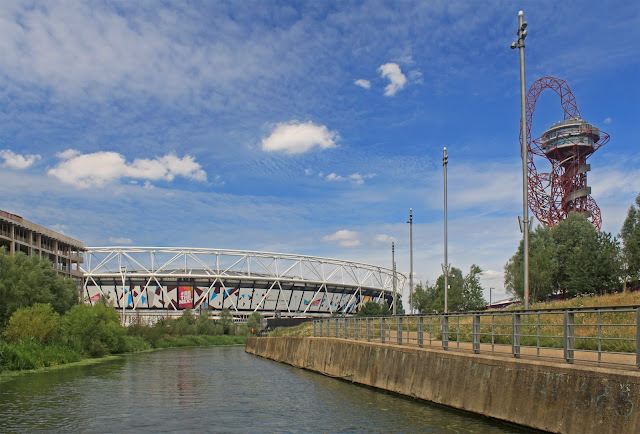 The most distinctive thing about these lower reaches of the Lee is the weed. The floating duckweed carpets the waterway in many areas, but the real danger is the long stringy stuff which lies beneath the surface and it is to propellers what stingers are to car tyres. I accepted that my propshaft was never clear of a ball of the stuff, but eventually it builds up till there is no water exiting the back and forward motion (including steering) is completely lost. There seem to be two types of aquatic stinger - the one which is shrugged off with a blast of reverse and the other which hangs on tenaciously and demands a visit to the weed hatch. Fortunately, beyond Hackney the weed is of the former variety. 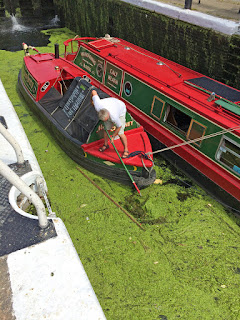 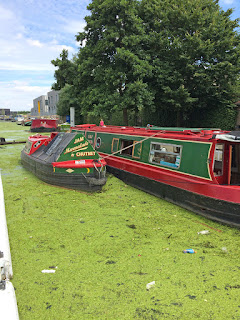 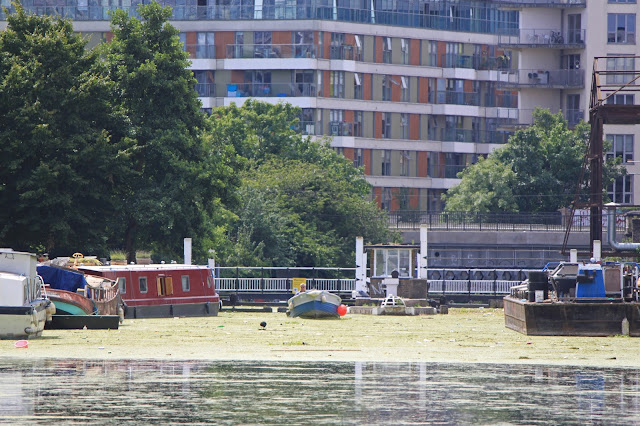 
The last lock on the Lee is Old Ford Lock and its approach was guarded by several hundred yards of solid Duckweed. We struggled through the thick Sargasso Sea and entered the lock by ramming the thick green carpet into an ever denser blanket in front of us. The stuff doubles in density every three days and is even faster in hot weather. CRT try to remove it but the 70 tons taken out last week really was a drop in the ocean. 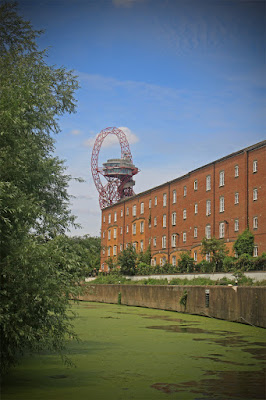 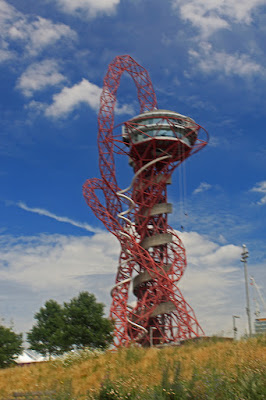 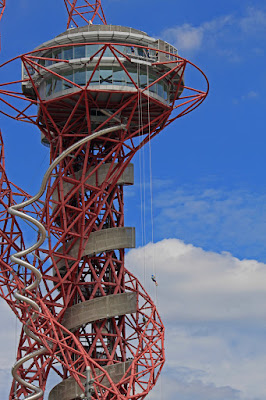 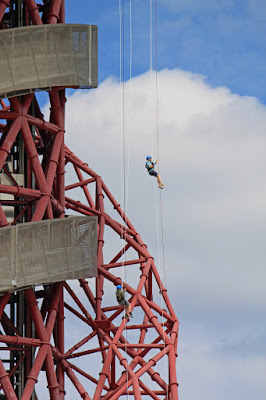 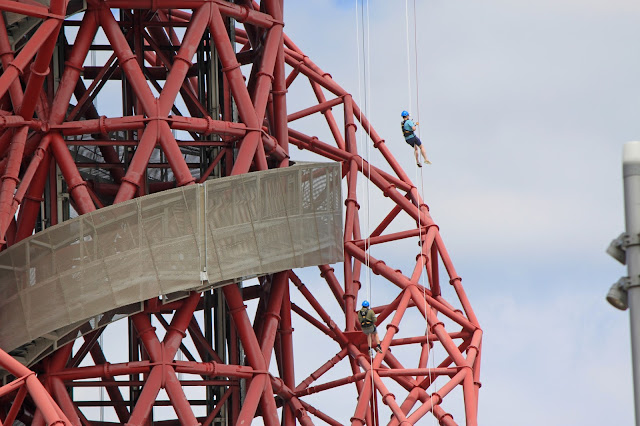 Below the lock the water cleared where the Old River Lea joins the Lee Navigation, and we had an unexpected choice. Just the day before CRT had unexpectedly removed the barriers to the circular park waterway, opening it up to cruising at will. Never one to pass up on a new waterway experience we did a hard left into the Old River Lea and passed close under the western side of the Olympic Stadium, now home to West Ham FC. 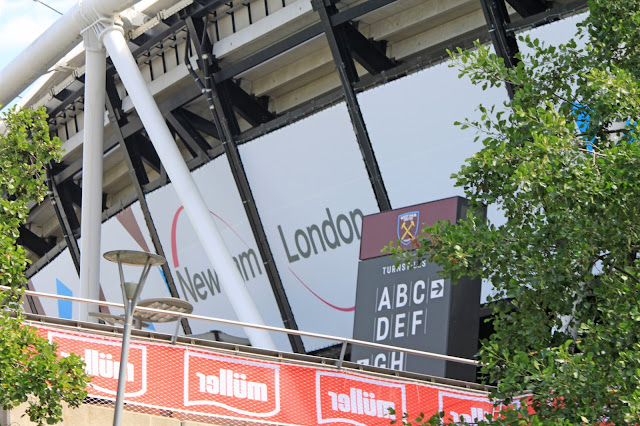 You get really close to the stadium!

The river curls round the stadium to carpenters Road Lock which is in the final stages of preparation for navigation, opening for booked passages in August and offering access to the River Lea and Waterworks River. 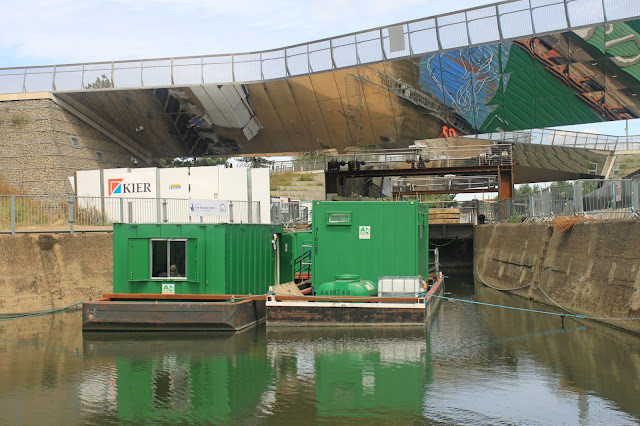 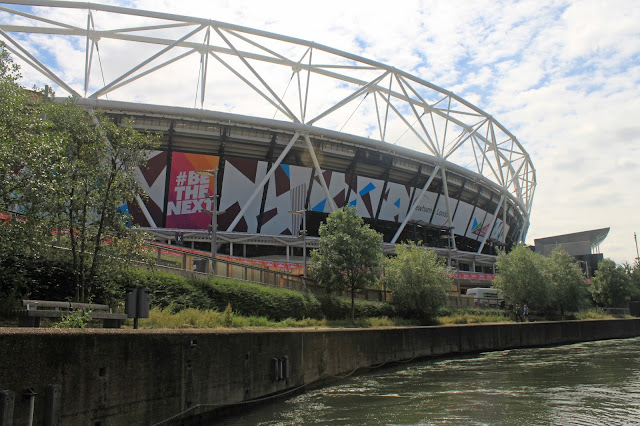 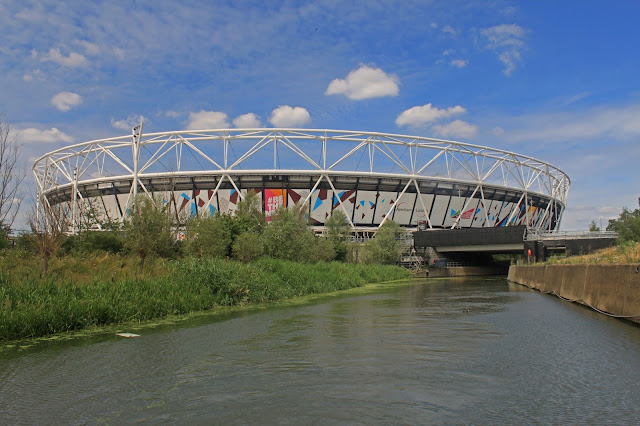 The concrete lined channel loops right round the stadium offering impressive views from most points of the compass, until ones attention is drawn to the Arcelor Mittal Orbit tower, the distinctive twisted structure which offered height and focus in the Olympic Park. These days it is a giant helter skelter and, as we passed, a base for a massive abseil drop. 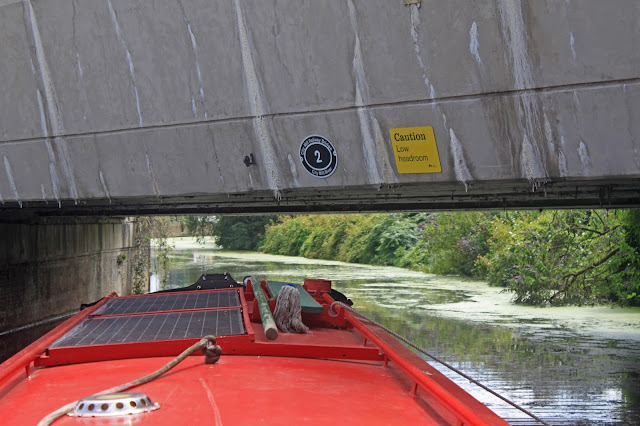 Low bridges - for comparison we fit through Froghall Tunnel

There are a couple of low bridges at Marshgate, the mid point of the ring but none so low to cause any problems for narrowboats. This back section is a bit silted and whilst at 22 inches the motor sailed across, the deep drafted stern of the butty next to me ploughed a groove and black mud boiled up astern. Nothing a bit of traffic wont address. 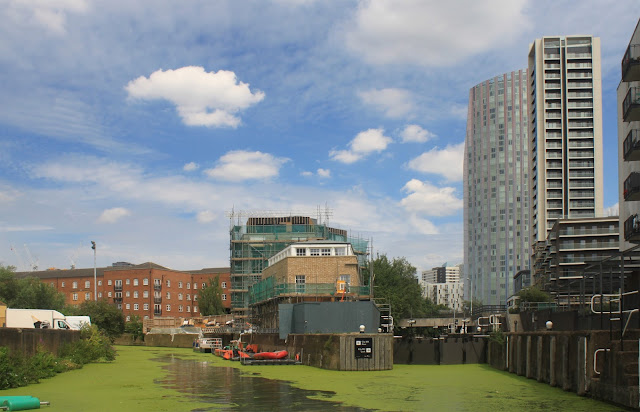 Then it was into the "death by Duckweed" zone past City Mill Lock and back on St Thomas Creek to the Lee, just upstream from Bow Locks.

So, what did I think of this addition to the boating scene?

I found the trip round the Olympic Stadium fascinating, especially viewing it from water level. The channel itself is nothing to write home about, bounded by the original high concrete banks The frequent signs of welcome  from CRT accompanied by a threat of a £150 fine is you as much as stop suggest one does not linger hereabouts - a message strongly directed at the large and growing local liveaboard community. A downside to this policy is a missed opportunity to visit the Orbit Tower - the ride may be pricey but it would have added hugely to the experience and offered an unforgettable birds eye view of the East End. Maybe a 4 hours mooring pontoon could be tolerated? 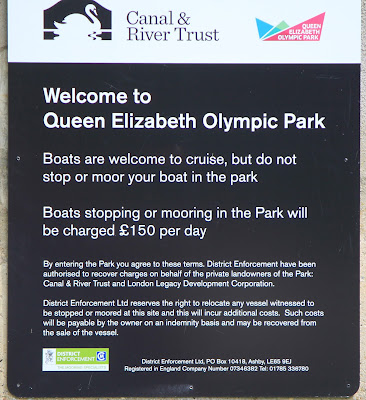 The weed is an issue on the Bow back Rivers, but this is seasonal. And now for a fascinating but entirely unauthenticated story told to me by a local boater at Bow Locks. Its reported that the Duckweek is Churchill's problem. It seems that the Luftwaffe used the shiny rivers for bomb aiming in WW2. In an attempt to address this issue Duckweed was (allegedly) imported from the Amazon and sown to cover the surface, whilst leaving the water clear beneath and thus did not impede the freight boat movements unduly. The stuff is supposed to die in winter, and whilst it decays absorbing all the oxygen in the water, it never dies completely and each year it returns. This is probably completely untrue, but why why let a an absence of verification stand in the way of a good story. 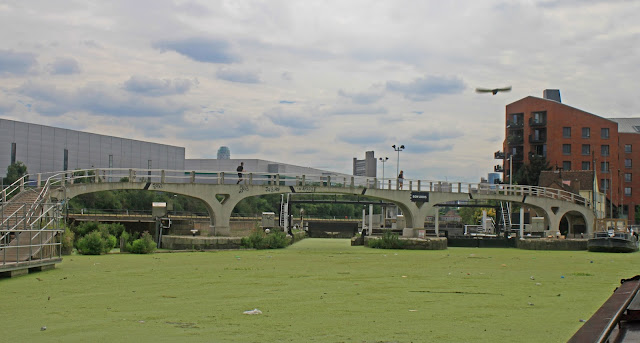 Finally, on the subject of Duckweek, it has high nutritional values but given the pollution issues in the Lee you are strongly recommended NOT to eat the local produce!

Our journey ended in Limehouse Basin where we found a 44ft slot which was just enough for us with the butty on the outside. Boat length is a significant factor when mooring in London. I have lost count of the times we have found a spot which is just long enough for the motor, and would probably be ok up to 50ft. However the standard 57ft boat would have far fewer mooring options. Its interesting that the typical live aboard boat is less than 50ft in length. 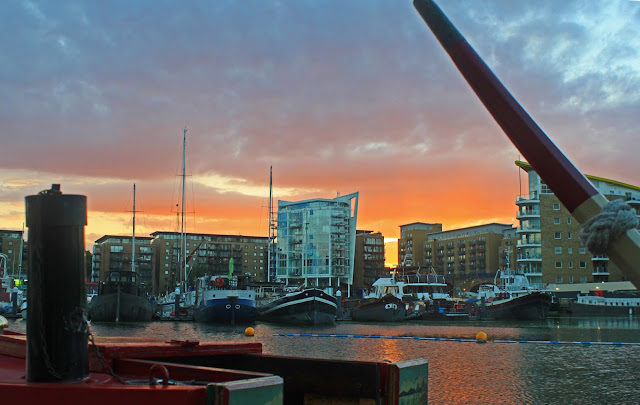 From Limehouse Basin we walked along the Commercial Road to the Limehouse DLR Station and found the noise and smell overwhelming. Life in the slow lane is a far better way to go.
Posted by Andy Tidy at 12:26 pm