Roasting on the Regents

Travelling the Regents Canal on a blazing hot Sunday probably isn't the ideal time to traverse the heart of the capital, but what it lacked in comfort it made up for in terms of colour and vibrancy.

We were up and away by 8.30am, rising through the lower locks of the Regents Canal before the worst of the days heat settled in. As with the Limehouse Cut, the pounds were dogged with weed which formed a huge moving sward of green in front of the paired boats. We continued in this formation through Mile End with its floating market in pause mode, waiting for the crowds to return to attend the funfair in the adjacent field. 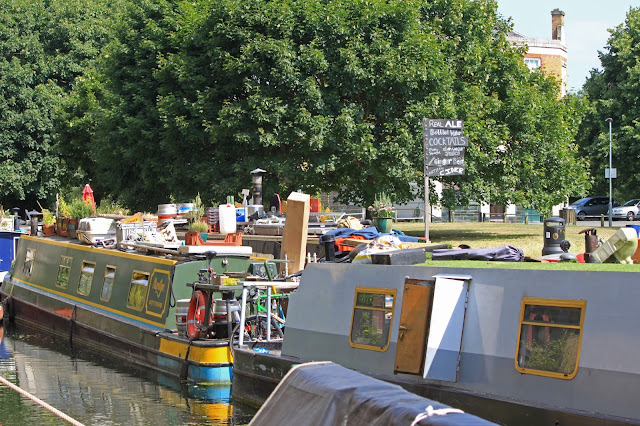 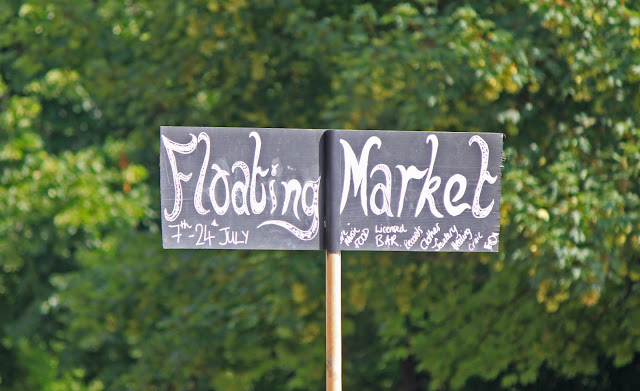 London's canals have been suffering in the recent drought and there has been insufficient water coming down the weeded Paddington Arm to keep the levels up. As a result the locks have been locked overnight in an attempt to allow levels to recover and to minimise the loss of water from paddles left open. I have to observe that this overnight water leakage would be minimised if the habit of leaving gates open on leaving locks was not so prevalent 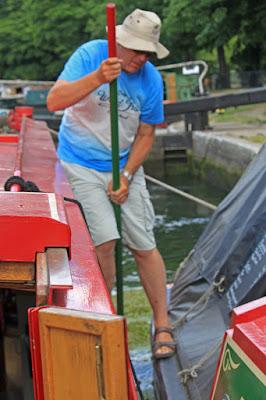 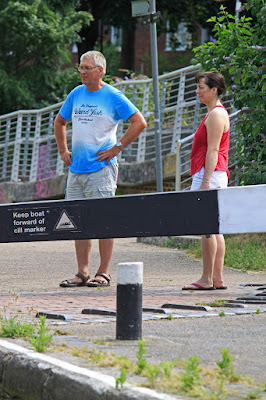 Locking up from Limehouse

Old Ford Lock was operational but when we reached Acton's Lock at noon we found the locks and chains still in place, in spite of notices saying they would be unlocked at 9.00am. One poor chap had been waiting since 9.00am and we were the first other boat to arrive. Our arrival was the first of several and within 30 minutes boats were bunched up above and below the lock. Attempts were made to contact CRT but as it was a Sunday no numbers were being answered. Helen persisted and after 20 mins on the phone she reached the emergency number, and pointed out that the locks remained firmly padlocked. The response was unconvincing till we pointed out that if a CRT employee with keys didn't arrive within 15 minutes it looked like the agitated mob would take matters into their own hands, with hacksaws and bolt cutters being dug out. 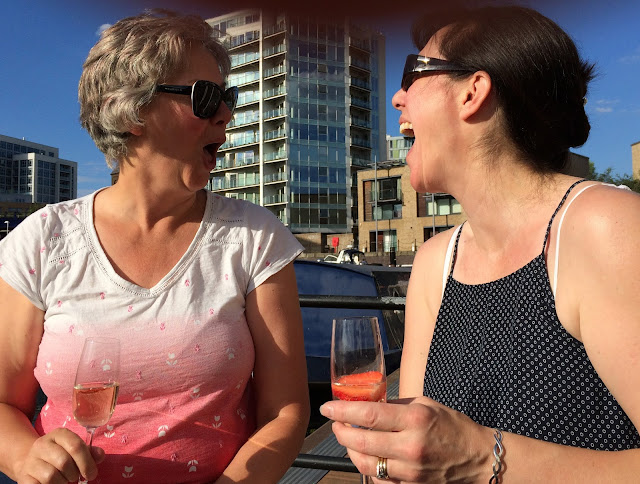 As if by a miracle, the holder of the keys materialised and the tension was relieved, boats moved and all was well with the world.

As we moved deeper into the city the breasted approach became untenable. With breasted boats lining the towpath and the motor being on the outside, we found the motor outside the navigation channel and way into the weeds. We therefore dropped into our favoured line astern formation and progress became easier, all the time watched with curiosity by the thousands which thronged the towpath and lounged around on their boats trying to stay cool in the heat. 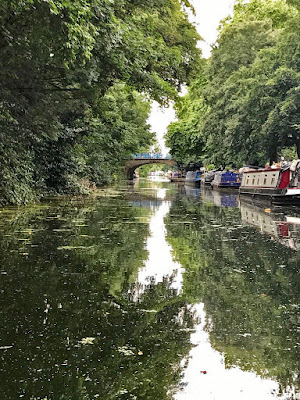 The Islington Tunnel proved to be a bit problematic. Its one way operation for this bore and as we rose through City Road Lock we could see the spotlight of an approaching boat, so we waited patiently. As it cleared the portal we saw no further light so started to enter. Bad move, because a small ourboard powered cruiser was also making a west to east transit without a light - not even a torch! But that wasn't the end of the problems. The two stroke engine has so filled the tunnel with smoke and petrol fumes we couldn't see the other end and it was only as we got into the gloom of the tunnel we realised that a small trip boat had entered the far end, its light completely obscured by murk. 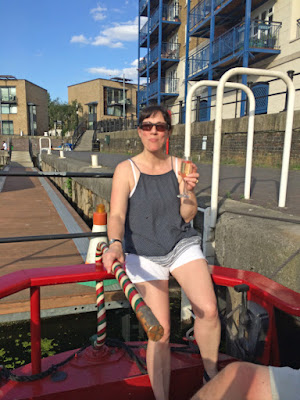 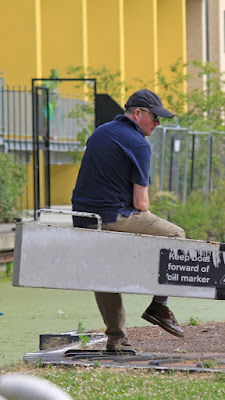 In the end the tunnel did clear and we motored through. Towing the butty through broad tunnels is one of our greatest navigation challenges, because if we don't hold a perfectly centre line the butty will swing to one wall and drag the motor with it. The only reliable way to tackle the tunnels like this is to move slowly but this means other boats come up behind us. And so it happened on this occasion with a trip boat arriving astern at the three quarter point. Not that they seemed to mind and they held back, passing us at the western portal. 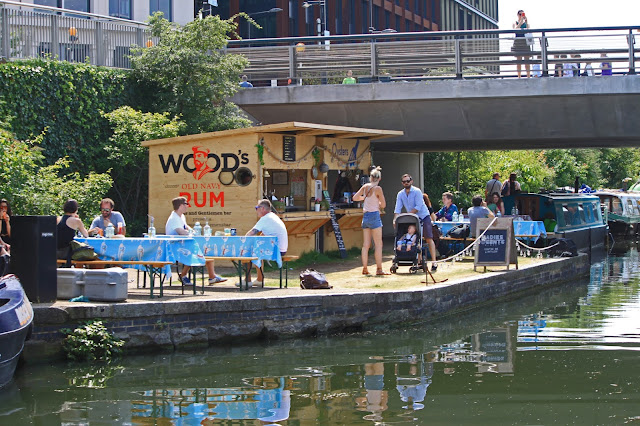 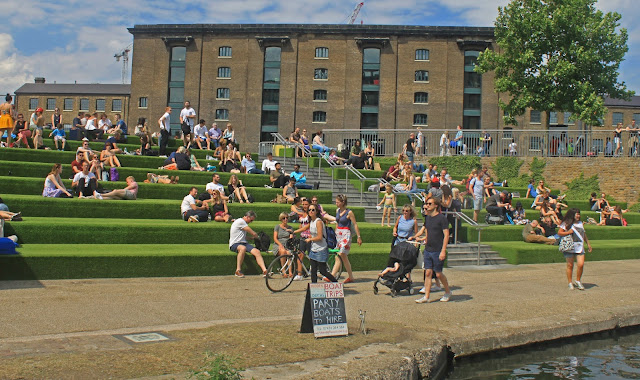 We dropped our guests off at Battlebridge Basin, conveniently sited for their train at Kings Cross. We pressed on with the towpath crowds getting thicker and thicker at the eating and drinking placed below St Pancras Lock. The area was buzzing with local colour. 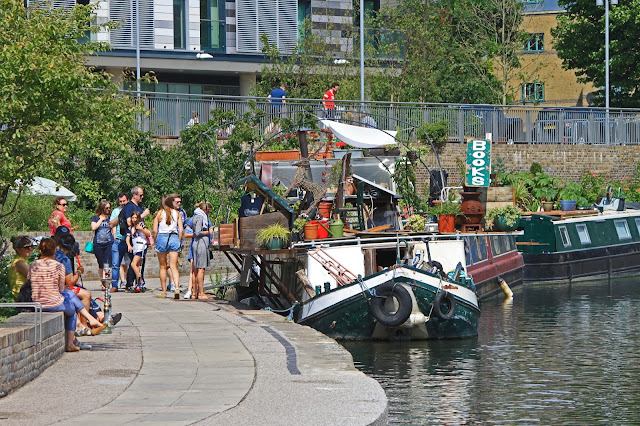 Predictably, all this activity reached a climax at the three Camden Locks. There were no Lock Keepers on duty so we were on our own in front of literally thousands of gongoozlers. The area is hugely popular and on a warm sunny Sunday afternoon every vantage point was occupied. Fortunately the locks are very tame so rising is quite a smooth process. The sad postscript to this paragraph is that less than 12 hours after our passage a major fire broke out in the craft hall, destroying over 10% of the market complex. 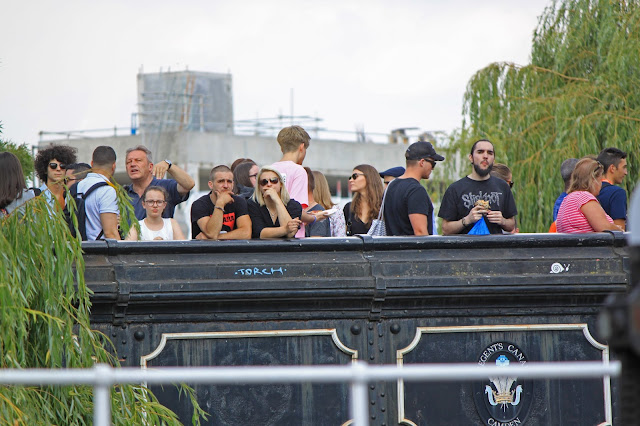 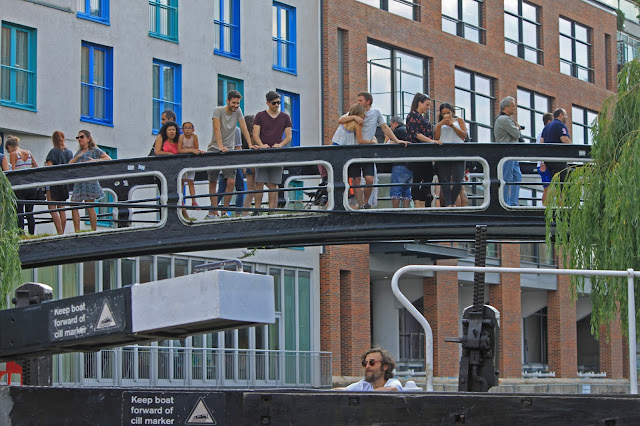 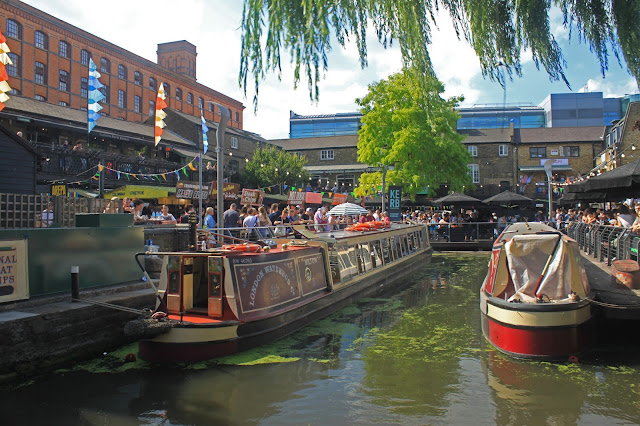 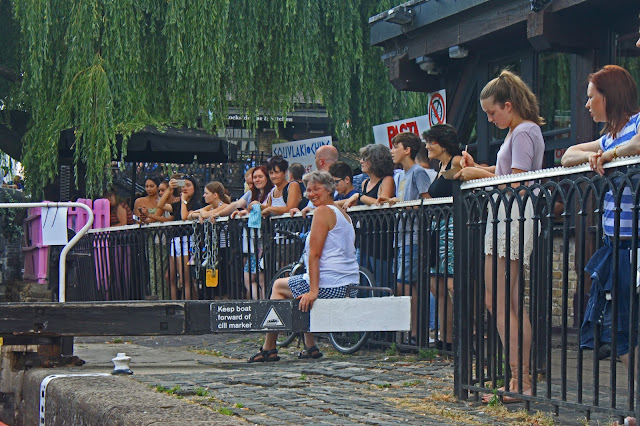 For all these crowds it is perhaps surprising that we don't make more sales as we move through. The truth is that there is little familiarity with the concept of trade boats in the area, but the exception was a group of ladies still in Pride mode who flagged us down near Cumberland Basin. Sadly, they thought we were a fuel boat but seemed enthused by the idea of preserves and ran along the towpath to buy half a dozen jars!

The last couple of miles were relatively quiet, aided by the overhanging trees of Regents Park which offers some welcome shade. We emerged into Little Venice and refilled our water tank at the ultra slow tap beside the bridge, passing an hour or so nattering to Lee Wilshire who was killing some time in the area. 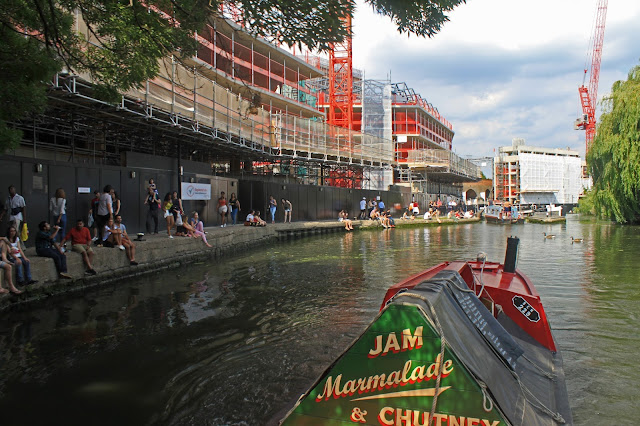 We finally entered Paddington Basin at 7.00pm, testing our laid back mooring policy to the limit. As ever, we found a spot just when we needed it, this one at the rear of St Mary's Hospital. The mooring was just long enough for the motor and so, as so often has happened, the butty went on the outside. To tell the truth, I quite like the butty on the outside because it makes it so accessible and also makes it much less prone to tampering.
Posted by Andy Tidy at 1:20 pm

I certainly pays not to have 'sticky fingers' all over your jam butty :)