I left you with scenes from a succession of Ganesh ceremonies and by the end of the afternoon the crowds had drifted away and everything seemed to have come to a conclusion. 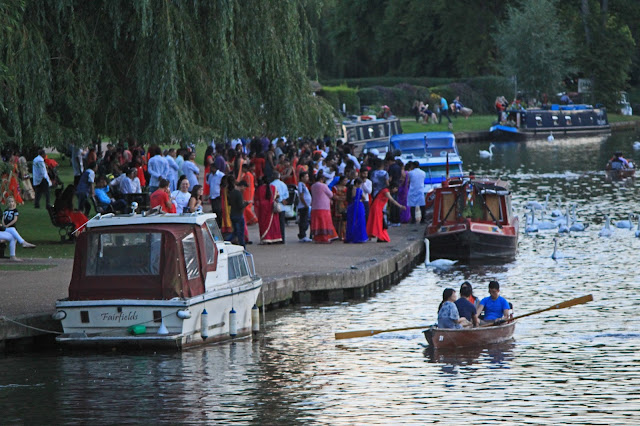 Just as the light was failing I decided to walk into town to post a letter, and much to my amazement I emerged from the back hatch into a multitude of sari bedecked ladies, mostly young. The throng was so great I had to ask them to move to let me off. It turned out that there was one last party which offered their statue into the River Avon beside the boat as I crossed the tramway bridge. 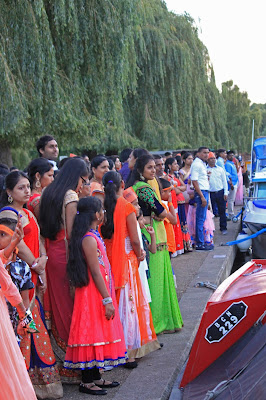 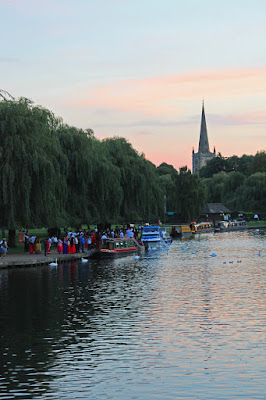 Bank Holiday Monday was forecast as a real scorcher and we had little appetite for another dose of Stratford mayhem, so come 9.30 we were off the river and making our way back into the narrow Stratford Canal. But disaster was to strike. Before we had even reached the first narrow lock Helen fell crossing the road, grazing hands and knees and more painfully, she fell flat on her chest which was the subject of recent surgery. 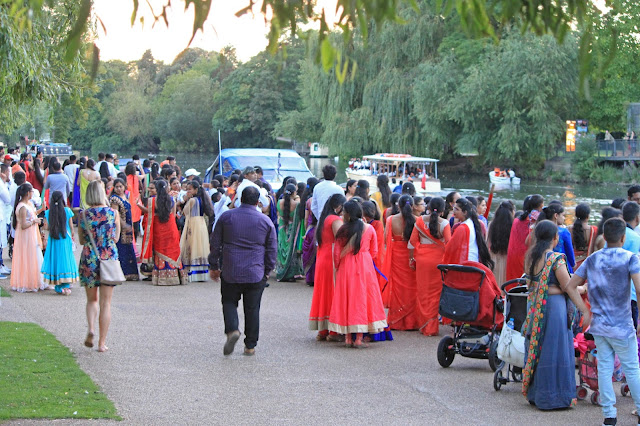 That put her out of action for a few days as she was in no condition to wind paddles or push locks. I therefore reverted to my slow but sure solo lock routine which is fine in all ways except shutting gates after me. This is one aspect of single handing a pair which is infinitely more difficult than a single boat. I have to pull 30ft of butty butty out of the jaws of the lock before I can steer, and there is no scope for hovering above the lock whilst the top gate is shut. Fortunately the tow path was busy and the passers bye were all happy to close the gates when asked. 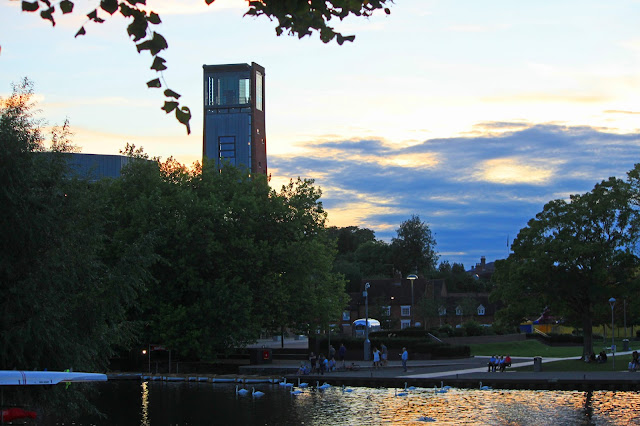 We paused at Valley Cruises to attend to a very full set of cassettes and then it was on to the water point below the Wilmcote flight. Five days without a refill plus making jam had left the tank very empty and a high pressure tap took over 40 mins to fill us up again.

The heat just kept building and building and the prospect of ascending the Wilmcote flight was very unappealing, so we found some shade just short of the bottom lock and stopped for the day.

Tuesday dawned misty and cool, a much better scenario for a solo ascent to Wilmcote. I was a bit concerned that my solo endeavours would hold everyone up but I soon fell in behind a family of two adults and three children out for their first day on a boat. Progress was therefore slow and even single handed I managed to keep up, assisted by a steady succession of boats descending. By the mid point a volunteer lock keeper found me and helped set all the locks in my favour and the boat behind kindly agreed to close the top gates - all in all the assistance was something of a godsend and by 2.00pm we were moored in Wilmcote and selling jam to the boaters moored there.

In spite of intermittent drizzle I went back to the top lock and foraged a pail of Pershore Yellow Egg plums plus a few kilo's of Blackberries - raw material for a jam making session tomorrow as a band of rain passes over.
Posted by Andy Tidy at 9:46 pm

Sorry to hear about your accident Helen :(
Do hope that you are feeling better soon :)