We ended up staying in Wilmcote for nearly three days, which was a bit longer than intended. However, there are worse places to be holed up with the village shop able to supply the necessities of life (including some really nice bread) and the Sainsburys delivery service arriving for the rest. 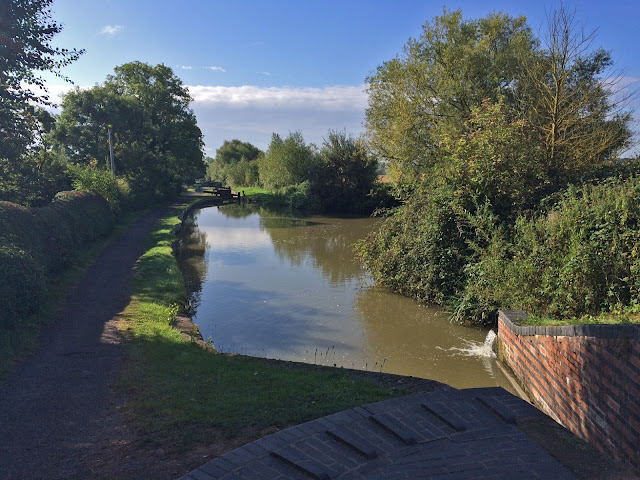 The main reason for staying was a long delayed meeting with Land Love, a magazine with a focus on the outdoors and foraging sort of themes. They have been wanting to run an article on us for over a year but had to delay due to Helens ill health last year. The interview has yet to take place, but in advance a photographer was commissioned to come and collect the illustrations, and Wilmcote seemed as good a location as any.

The area offers rich foraging opportunities including sloes. damsons, yellow plums, rose hips and of course a plethora of blackberries. In advance of the visit by Sussie we had a day picking blackberries and mixing them with some damsons we had previously picked on the Grand Union. In the best tradition of Blue Peter, we prepared several batches the day before her visit, so we were ready to deliver the jam making element without delay after the foraging shots had been obtained in the early morning sun. 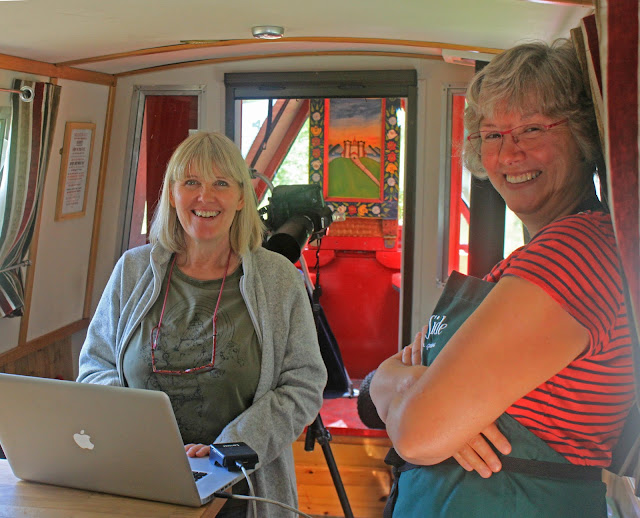 In the event Sussie stayed with us for about four hours and left with a clutch of great photos, which will be sent to us when the article has been published. After she had gone we rattled off another couple of batches of Damson and Bramble, one of our favourite jams. Isn't it amazing how plants which fruit at the same time so often go together really well?

Thursday saw us progress up to Lownsford with Helen doing the steering and me working the locks, which come at a rate of about two per mile. We have often moored opposite the Fleur De Lys but had never visited, so we sampled their famed pie menu and I can really vouch for their beef and stilton - fantastic. All this was washed down with some very drinkable IPA and the bill didn't worry the bank manager in me. 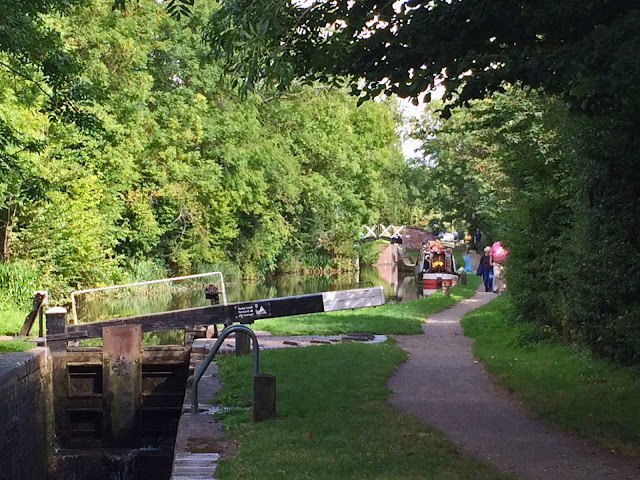 Bottom of the Lapworth flight

Friday came with a bit of a problem. One of Helen's knees blew up with a huge swelling, probably a delayed reaction to her fall in Stratford. Far from being on the mend she became pretty well immobile, unable to even stand and steer, which is a bit of a problem when facing the  30 locks which stand between us and the Birmingham Level. There was no real choice so we set off, with Helen doing as much steering as her knee would allow which turned out to be about 5 locks.

And then, hurray for volunteer lock keepers! As if by a miracle a lock keeper appeared as we started the Lapworth flight - would I like assistance to the top? Is the pope Catholic.... yes, yes, yes. Helen was able to retire to the cabin and take the weight off her knee and between the lock keeper and myself we made a very fast ascent to lock six from which point I continued alone. The amazing thing was that we only passed one boat in the entire time we were working our way uphill - what a contrast to last weekend. 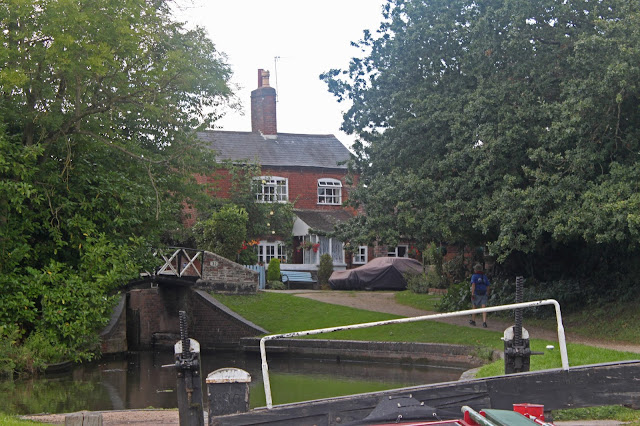 Top end of the Lapworth flight

We are aiming for Netherton but we have a few days to spare so were planning to pop home and pick / freeze damsons for use in the winter. The problem is Helen's knee and chest - both are giving her a lot of pain and being cooped up in the boat isn't ideal. With her feeling so uncomfortable a friend offered to come and collect from the Blue Bell at Illshaw Heath which will give her a couple of extra days in the relative comfort of home. The one thing I didn't do was to warn our lovely neighbours of Helen's imminent arrival so my apologies to them for the unexpected bumps and bangs when she returned...

For my part Sunday was cold and wet so I spent the morning making two batches of Sunshine Plum Jam, a new jam comprising yellow plums with orange. This zesty mix makes a perfect breakfast spread. The afternoon was invested in making 15 bottles of sweet Elderberry Vinegar, a modest but useful addition to our range of vinegars.

The rain eased off at 4.00pm and offered a window of opportunity to do an oil change during which, for the first time, I managed to spin the filter off without resorting to the chain wrench. I also realised that I had never renewed the air filter this season and the engine hesitation was due to a clogged air intake. The engine immediately ran better which was a very rewarding outcome.

The forecast is better tomorrow so my plan is to be off early and get the boats into Birmingham in good time.