Travelling the Staffs and Worcester has had something of a homecoming feel about it. For many years the route from Gailey to Great Haywood was something we did several times each year, and often as part of a weekend break which took us to Tixall Wide and back.

Would you believe it, but its at least five years since we covered the eastern half of the canal and its certainly the  first time we have towed The Jam Butty along its winding route. It was therefore very familiar but at the same time I have had very little idea of the time it would take to travel. In the event what used to take us one long day was covered in two modest days, a slowing down which has more to do with our appetite for hours at the tiller than slowness through the water. 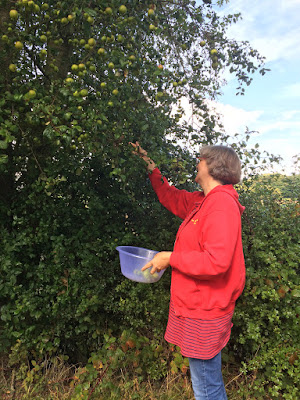 We were relying on Gailey having a working elsan point and were more than a bit miffed when we discovered it closed for refurb work. I do wish CRT would provide a holding tank as a temporary stop gap for these repair works. The run into Penkridge was to the usual accompaniment of the M6 and all along the route we were being tailed by nb Helen, but who were never quite fast enough to catch us in the pounds.

We paused in Penkridge and, for the first time, walked into town. And what a lovely little centre it is. We restocked on provisions as a good sized Co Op, bought some great bacon, sausages and pork pies in a real local butchers and, on the suggestion of the crew of nb Helen, visited the agricultural supply company on the far side of the main road. This place does a great line in work wear suitable for boating and two pairs of trousers were purchased as well as a warm top for Helen.

After we restarted we were surprised to see nb Helen again on our heels - they must be gluttons for slow travel! No sooner had I left the town than I thought that the engine was misfiring with erratic lumping and bumping. This got worse and worse till a moored boat told me that a rock concert was in progress at J13, and the bass lines were the cause of my mechanical concerns.

Not long after we came to Teddesley Boat Services and I was most surprised to see what appeared to me the bows of Lady Hatherton peeking from the shed she occupied for so long. But as I looked closer it appears that the wooden hull has morphed into steel. I doubt that this is an aquatic case of alchemy so can  someone tell me if this is a reproduction of the venerable inspection launch, and if so what happened to the old one I last saw five years ago.

I was keen to be well away from the M6 as I was from the music festival, so we progressed to beyond Acton Trussell, and just short of Deptmore Lock, sharing a peaceful mooring with nb Helen who finally passed us, by 200 yards!

Sunday dawned clear and bright but we seem to be getting worse and worse at starting out. In fact we were so late breakfast became brunch (bacon and sausages form Penkridge butchers) and we didn't get going till 11.30am. Stafford boat club was surrounded with visiting craft and most bore the insignia of RN, so I guess it was a meet up off the Russell Newbury owners club. I don't know if they have an informal collective name, but "The Old Thumpers" wouldn't be too wide of the mark.

Stafford turned into Baswich and it was great to see some evidence of work on the ground for the Stafford Waterways Link - I am not sure how this is going, but I have always felt it is something of a dark horse restoration project. Then it was Milford and to Helen's huge relief I found a crab apple tree loaded with fruit. For weeks I poo poo'd the idea of picking on the GU where the trees were prolific, but foraging opportunities have been a bit thin on the ground around Birmingham. 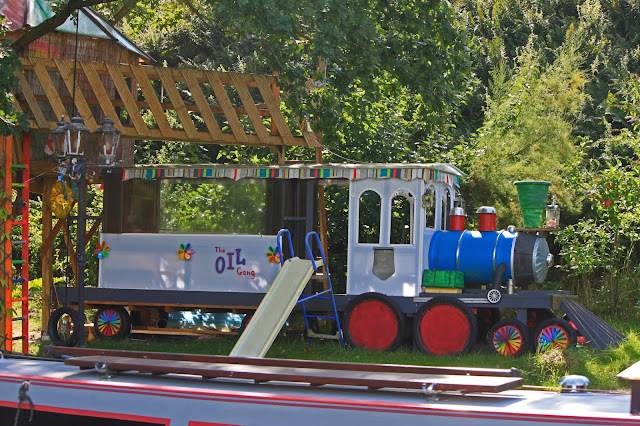 The good weather left us as we crossed the River Sow and from then on it was brollies and waterproofs with squall after squall hitting us, till it settled to steady rain as we crossed Tixall Wide. The plan was to get to Rugeley for Morrisons and the Launderette, but as the towpath filled with water I took the expedient option and pulled into a convenient 70ft gap just after Great Haywood junction. Rugeley will still be there tomorrow!
Posted by Andy Tidy at 10:16 pm