A trip up the Shroppie wouldn't  be complete without a visit to Industry Narrowboats at Stretton Wharf, birthplace of The Jam Butty. 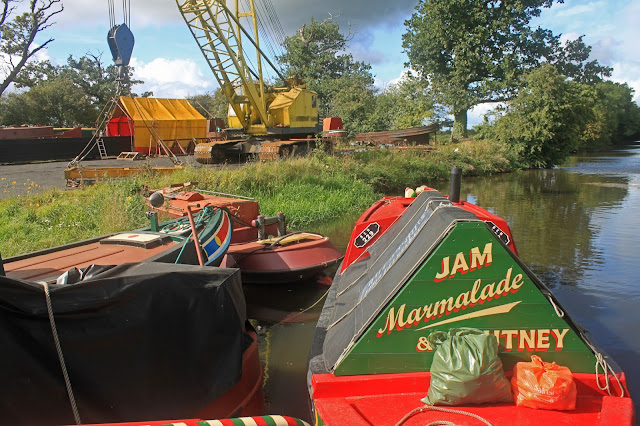 We have a standing invitation to pop in and our progress northbound the day before had already been noted. On this occasion the visit was with the specific purpose of foraging down their driveway where all sorts of seasonal goodies were promised, and we were not disappointed. We picked a huge bag of cooking apples, a smaller bag of rosy red eaters, sloes for sloe gin, rosehips for rosehip jelly and quite amazingly, three kilos of late red plums which were clinging into the branched by their fingertips. 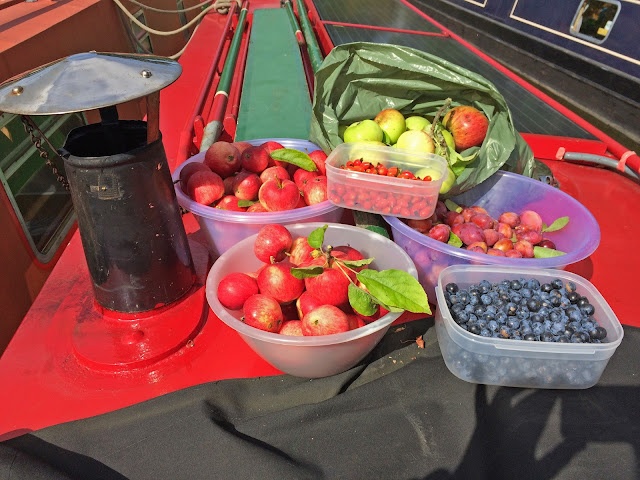 The fruit foraged at Industry Narrowboats

One snag occurred whilst harvesting - my extendable fruit picker decided to jam in the retracted position and refused to open up. I tried everything but in the end asked to borrow their workshop vice which did the trick. Whilst I was in the workshop I couldn't help but see Canis Major up on the blocks. Canis Major is a shortened GU motor built in the 1930's and is noteworthy as she was the last boat converted by  Peter Keay of Walsall. 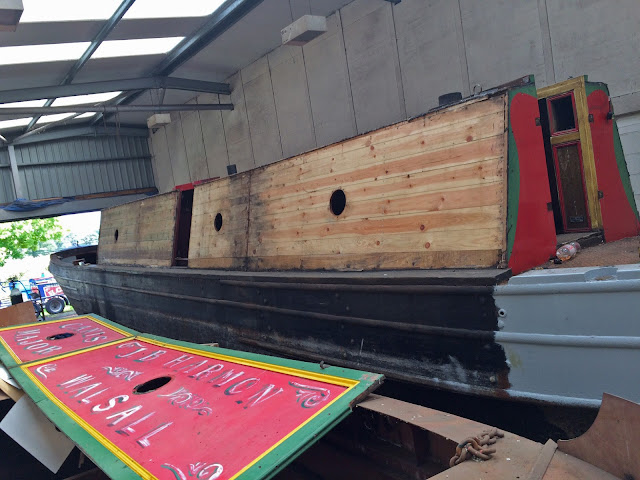 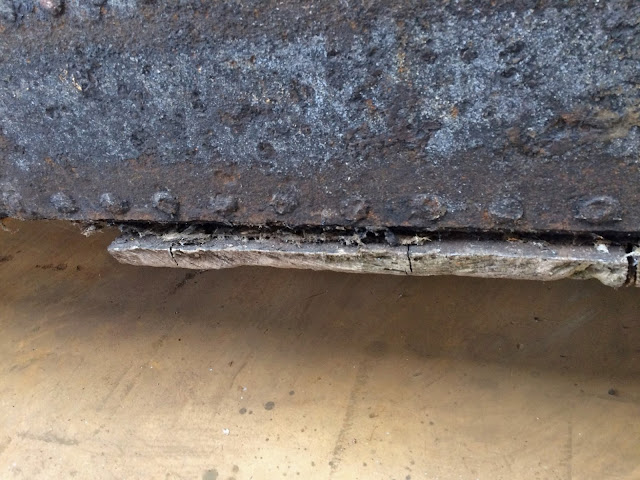 I have to admit that I have a real fascination with historic boats in the "raw", and they don't come much rawer than this one. She has just had her wooden bottom removed and her knees are exposed with great holes cut into her sides where new steel is being welded into areas which must have been paper thin. The is a fine craft, unusual in that she still has a wooden top conversion and her old Lister engine waits patiently for the next phase of her life. 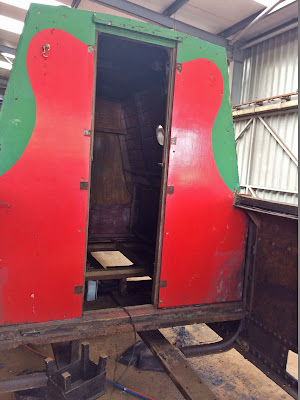 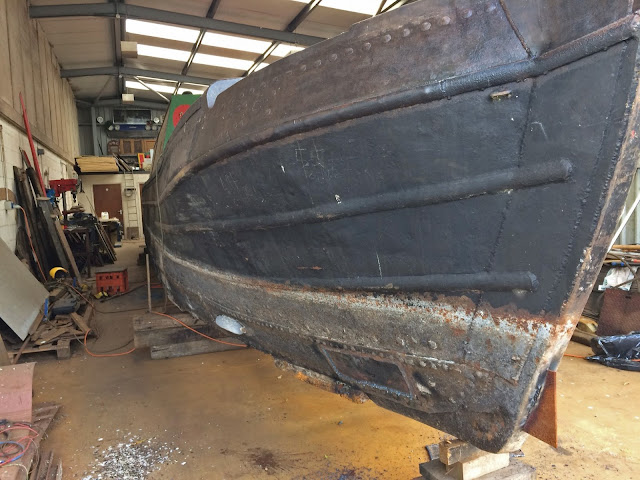 No bottom but nice lines!

Industry Narrowboats specialise in the old and the unusual and its always a delight to have a look round the yard and see the projects they have on the go. Perhaps the most interesting are the odd "bits" of boats hanging around, a habit which of course led to the birth of The Jam Butty four years ago made from two back ends welded together. 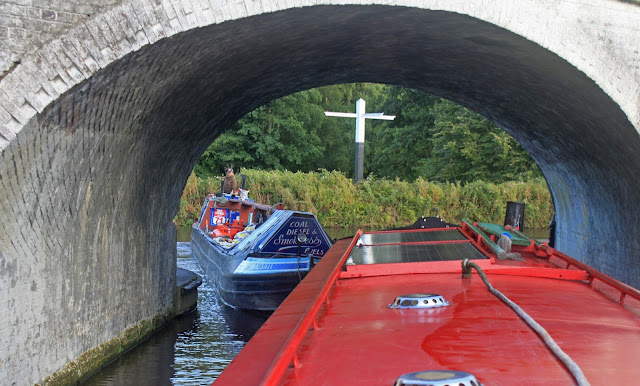 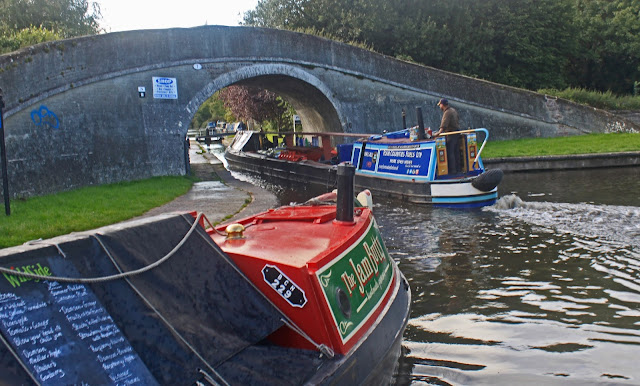 An unexpected encounter with Halsall

Our return through Autherley Junction was delayed as the coal Boat Halsall's bows edged into the junction bridge hole just as I was coming out of the stop lock. Brian McGuigan was at the helm and took the setback in his stride. He backed off a bit and I kind of jack knifed round his stern with both of us busy taking photos of each other! I got the impression he was rather taken with our little butty and credit goes to him for the photo of me getting our pair out of the weeds opposite the junction. 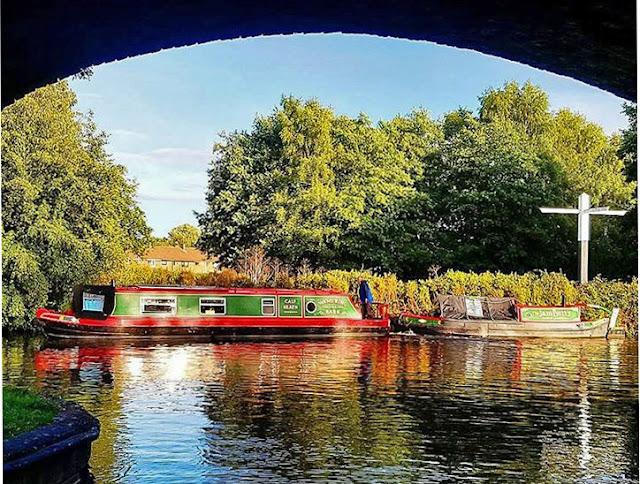 Brian McGuigan's shot of me

We pressed on to Coven and a good meal at the Fox and Anchor which used to be our local when we moored at Calf Heath. The food was good quality and washed down with a couple of pints of Proper Job. 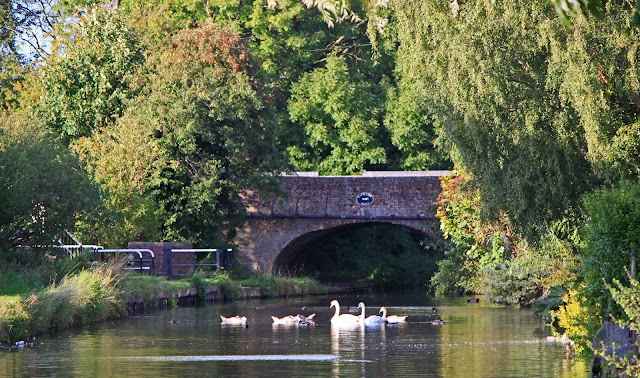 Pendeford in the later afternoon sun

Friday was another industrious day after a very late start. The red plums were prepped and turned into a couple of dozen jars of Cinnamon Plum Jam. At the same time the butty had a good sort out, clearing up the mess after the rain impacted shut down ant Netherton. 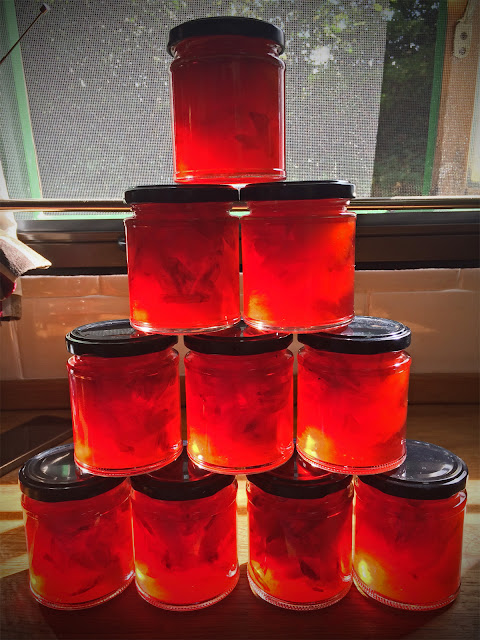 Those plums in their new format....

The late afternoon was spent making the short hop from Coven to Gailey, passing Hatherton Marina at Calf Heath which was our home mooring for so many years. I certainly don't need a map for this twisting waterway, every curve is indelibly imprinted on my memory.
Posted by Andy Tidy at 9:52 pm

I spotted you mooring up today in Great Haywood and wondered if you make crab apple jelly! If you do as you walk into Great Haywood marina there is a crab apple tree on the left hand side that is laden with fruit. I would have popped round and asked you myself but we are leaving early in the morning. I'm sure Steve the marina manager would be more than happy for you to have some of the apples if they could be of any use to you! Happy selling Paula x

Thanks for the heads up Paula. We do make Crab Apple Jelly and we're busy picking some on the s and w yesterday. Will have a look at the marina tree on our return next week as we are on a bit of a mission to get to Rugeley this morning for an appointment. Rain stopped play yesterday.