Yesterday was a day of CRT meetings starting with the fifth Annual Public Meeting, this time held in The Gatehouse at The Bond and then after lunch the half yearly meeting of the National Council, also held at The Bond but this time in the smaller conference room overlooking the end of the Grand Union canal. 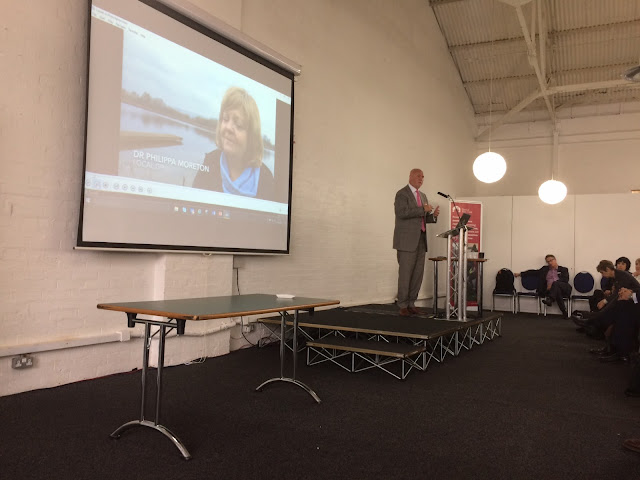 The Annual Public Meeting is a regulatory requirement for a charity and is an opportunity for the Executive team to present a "state of the nation" address, which shares progress and issues with anyone with an interest to listen. On this occasion the Trust has moved into the digital age and broadcast the event live via Facebook.

The National Council is a collection of all interested parties, some elected and others co-opted plus the 10 Trustees who are the legal guardians of CRT. The underlying role of the Council is to appoint the Trustees and, in the event of something going wrong, to un-appoint them. However but the main day to day role is to see what is going on across the Trust and therefore offer insight and input from the various user groups perpective. Essentially, as an elected member of the National Council representing canal related businesses I have a seat at the table and the opportunity to engage with the powers that be to define the direction the organisation is going and ensure that matters of concern are at least considered.

As ever with my "CRT jottings" these are the things which struck me during the meetings, but they are in no way comprehensive minutes.

The Public Meeting was opened by Alan Leighton, Chair of the Trustees who is a pragmatic, no nonsense sort of guy who is good at cutting through the crap and getting things done. His summary was that CRT has had a successful year but there is still much to be done. His particular focus was on improving the relevance of the Trust in a future environment, broadening its appeal and acting as a catalyst for change, particularly in urban environments where we are able to make a positive impact outside the waterways community.

The Trust said goodbye to three trustees who had served their maximum periods in office and welcomed two new faces - Sue Wilkinson and Sir Chris Kelly. Don't be put off by the "Sir" - he was a senior civil servant and getting a title seems to often be part of the end of career package and whats more he was, for many years, a boater himself. The new appointees offer particular skills the trust will need in the coming years, including experience to help to renegotiate the government grant - discussions which will start in just 4.5 years time.

Richard Parry walked us through the income and expenditure of CRT which has broken the £200m threshold for the first time. Essentially 25% comes form the Govt grant, 25% from boating, 25% from property investment income, 13% from utility transfer contracts (water, gas and telecomms) and the rest is from charitable donations from one source or another.

There was also a fair bit of information about the now closed final salary pension scheme defecit which has grown due to actuarial recalculations and lower interest rates. The Trust has recently added £5m to the scheme and we were advised that relative to many other UK pension schemes it is in good shape. The Trustees are maintaining a close watch on this potential liability.

Given the dependence on the Grant and a natural government desire to cut such payments, getting the Trust in a strong place to renegotiate it is of paramount importance. We can therefore expect to see an increased focus on the non boating partners in the coming years to ensure that any suggestion that the grant will be cut is resisted in as many quarters as possible. The focus of the presentations therefore tended to be outside the boating community. This outward looking approach was apparent in the choice of Heather Clarke as presenter, specialising in measurement the link between waterways and well being.

Specific boating issues were covered in the question and answer session including:


I appreciate that this may suggest that CRT is more interested in the general community benefits of the waterways rather than as a navigation authority, but this is probably a correct focus if we want to retain that £50m grant from the Government. At an operational level CRT is navigation organisation through and through and its our job to ensure that this core priority is not lost.

The National Council meeting continued from the Annual Public Meeting. An explanation about how the Trustee selection took place was offered, focussing on what the individuals will bring to the board and why the number of trustees has been reduced from 11 to 10 (charity best practice). The Council elected the new and continuing Trustees by a show of hands.

There was than a short presentation about an ongoing governance review which is taking a critical look at how CRT is governed.

This started with the Waterways Partnerships with the review completed in July and is now being considered by the Trustees. Outcomes not yet shared.

The Trustee Board review is on going and will be complete by the next council meeting in March 18 (I think).

There was also small group discussion about the possibility of a review of how the National Council operates. Various ideas and observations emerged, including starting with a questionnaire. These ideas will be collated and considered by the Trustees.

There was a presentation about Digital Marketing including its origins and how it is being embraced by CRT. My take is that CRT isn't exactly at the bleeding edge (beyond the cutting edge) in this area, but it is moving forward particularly in its attempts to engage people outside its traditional boating circles.

There was also a presentation about Hydrology which was a great interest to the nerdy part of me. They explained how CRT manages 74 reservoirs which represent some of CRT's highest risk assets (and also represent a large proportion of this winters asset repair spend).
They revealed how models are being run for various climate change scenarios and reflect the CRT interpretation of the UK water risk audit.

Drought and Flood represent the Trust's highest risks. This led to the production of the October 2015 strategy paper. The current focus is flood risk management and it was pointed out that lowering water levels, and emptying reservoirs to potentially accommodate flood water is a trade off against drought resilience in the drier summer months.

This led to a presentation on Water Transfer opportunities which are currently being tendered for. This would involve government capital spend (not CRT money) and an annual revenue stream for channeling water supplies from wet areas to the drier south east via the canal network. A good example is the existing transfer of water down the Llangollen to Hurleston or the movement of water from the River Severn to Bristol vial the Gloucester and Sharpness.The outcome of these 19 tenders will be known in 2018.

There is also ongoing work on the use of canal water for heating / cooling via heat pumps.

As you can see, over time the various specialist presentations give the National Council a broad view of the operations of the Trust and help them make informed contributions where appropriate.

Whilst matters can and are raised in this forum, most if the nitty gritty issues are thrashed out in the smaller working groups, like the Elected Boaters meetings and the National Advisory Groups (NAG's). The Licensing consultation is the current focus of attention and phase three is about to start.

Andy - an excellent summary of the day (well the bit I was at) and I think it shows the Trust in a ‘has done well / can do even better’ situation.

Thanks for the interesting summary Andy, and keep the good work.

Very interesting Andy, thank you for attending and disseminating this information.

Brilliant, thanks Andy. I've copied and pasted into the RCTA's first blog post on their newly built website https://rcta.org.uk/crt-meetings-a-double-dose-by-andy-tidy/