Huddlesford represents for many traders, ourselves included, the last event of the year so there was something of an end of term feel about it all. For some it represents the end of a busy season and some welcome time away from the "circuit", but for others it marks the springboard for paid winter jobs. 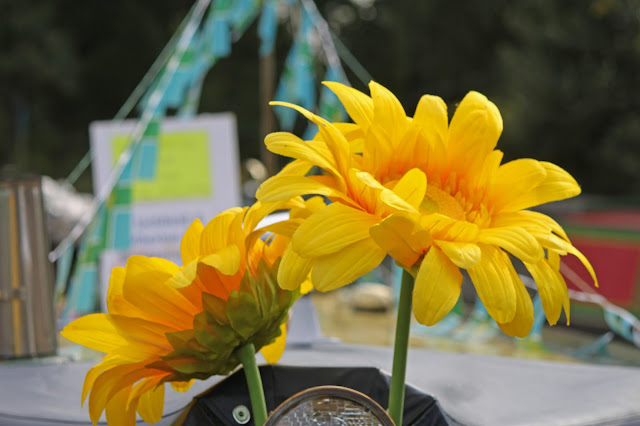 The event is run by the Lichfileld and Hatherton Canal Restoration Trust and hosted by Lichfield Cruising Club, using their grounds and clubhouse as a base. The aim of the bi annual event is to raise both funds and awareness for the ongoing restoration of the Ogley Locks section of the Wyrley and Essington Canal, better known as the Lichfield Canal. 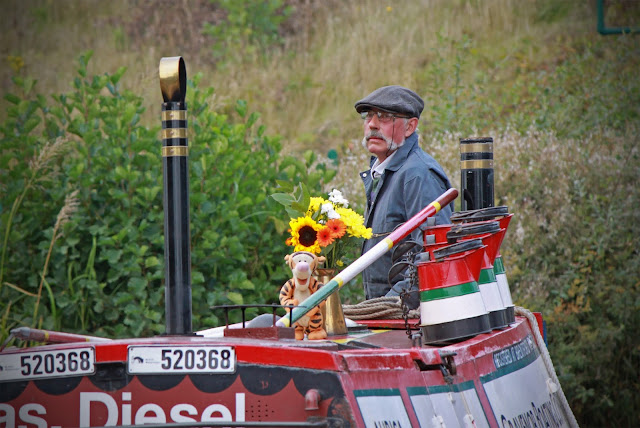 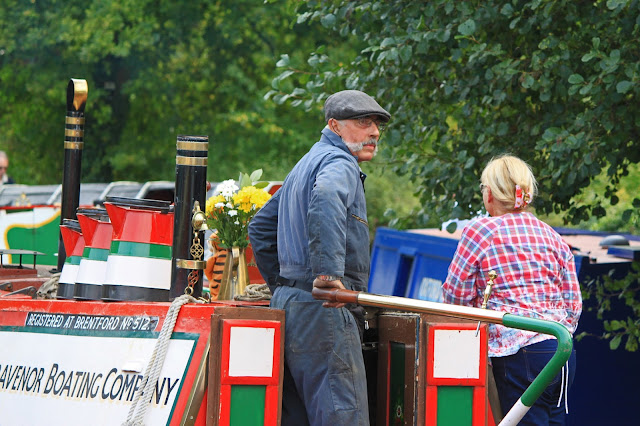 Being late in the year, the event is particularly susceptible to adverse weather. On this occasion it was largely dry, albeit on a very damp base laid down during some rainy days just before hand. The weather was overcast and at times damp on the Saturday but the sun shone on Sunday which swelled the crowds and lifted spirits no end. 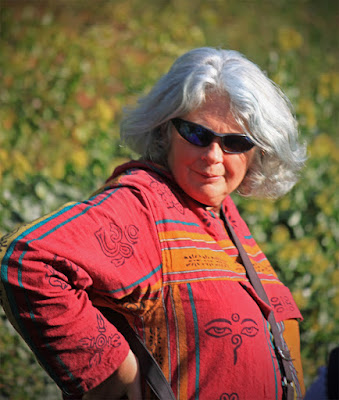 For us this is our "home" event, with our house just a few miles away. This meant we had access to our car and we immediately found ourselves making a transition from boating life to winter time home life, spending time at home, seeing home friends and even attending committee meetings (me). 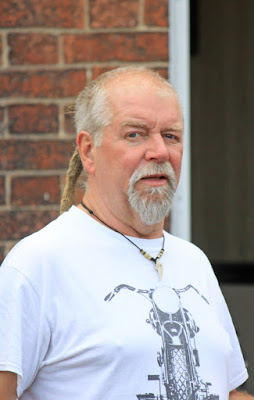 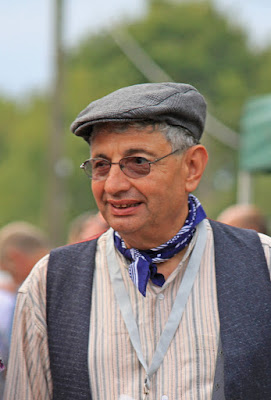 The weekend was somewhat curtailed for Helen as she had to leave immediately after the "church in the field" had finished to be with her mum. This left yours truly alone manning the stall with some tea, water and some sandwiches to keep me going. Thankfully Tom, a fellow member of Longwood Cruising Club showed up bearing a pint of beer and a much needed opportunity to attend to the other end of the drinking process! 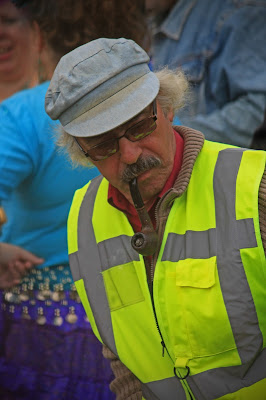 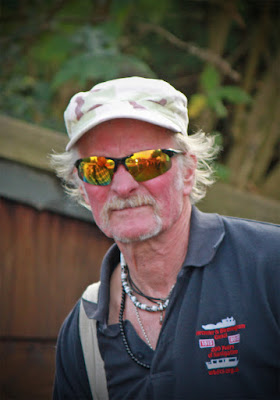 Sunday was the better of the two days from a trading perspective, an experience shared by most of the other traders lifting the overall outcome to around average, which isnt bad for such an out of the way location. The location did also present a few challenges, notably in terms of the facilities available. Traders tend to arrive a couple of days early to get everything set up, which for many meant five or six days on site. The tank of water can be made to last and whilst rubbish couldn't be disposed of at the club, this could reasonably be stored for disposal at he next CRT site. However, elsan's cant be made to stretch and disposal of contents is a must. The club has an elsan point (which I used once) but then discovered that visiting boaters were not permitted to avail themselves of the facility, even early in the morning before the show opened. As a result one cassette had to be hauled to our home and another was toted on a 15 minute drive to Fradley Junction. All this was hugely irritating when a perfectly usable elsan existed just 100 feet away! I have to admit that this exclusion for visiting boaters irritated me, probably more than the inconvenience justified. If the on site cess pit is too small why not hire a "cube" along with the portaloos as other festival organisers do? Gripe over. 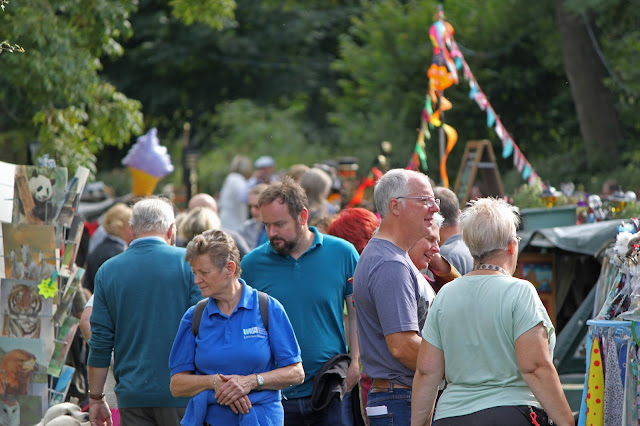 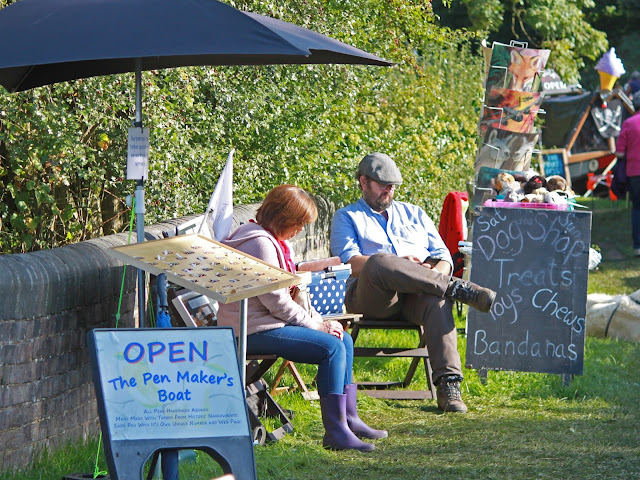 Talking of locations, its main downside is the proximity of the railway line which crosses the Coventry Canal at this point. You do kind of get used to identifying the difference between the thundering roar of the Pendolinos at full stretch, the rattle and clank of the container trains (16 or 32 carriages) and the booming din of the diesel powered bulk carriers without so much as a glance but its difficult to get any sleep for the first night. But like most things you get used to it and adapt so after a couple of nights the trains were largely consigned to background noise. 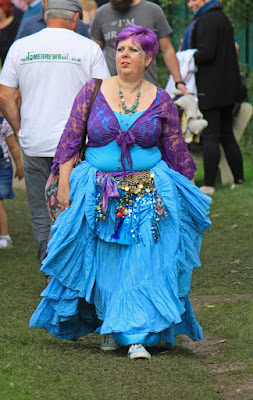 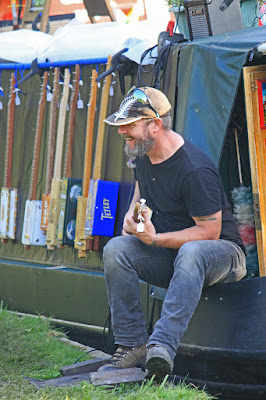 My Sunday was therefore confined to the stall and I simply photographed what I could from the butty, but to be fair most of the world seemed to cross the bridge and so fall into my field of vision.

By 6.00pm on Sunday I pulled the covers over the hold and instantly the rain started, continuing all night and picking up to a deluge in the wee hours, turning the towpath into a quagmire. Martin joined me on Monday morning and together we moved the boats round to the Dog and Doublet at Bodymoor Heath, ready for a major push back to Longmoor on Tuesday.
Posted by Andy Tidy at 6:35 pm

Email ThisBlogThis!Share to TwitterShare to FacebookShare to Pinterest
Labels: Coventry

I agree with you. If they are inviting traders, expecting them to be there to add 'colour' then the least they can do is let them empty their loos! They are not just 'visitors' they are an essential part of the weekend.
Kath (nb Herbie)

The West Coast Main Line also runs past the bottom of our garden here in Lancaster, but we only hear it when we want to!
Highlight of my mornings is when the 0914 to Preston, made up of four 1970s coaches and a 1960s diesel loco, thunders past!

We will add this to the file for next time. I was unaware of this rule and agree that a solution needs to be found. Dora (Director of LHCRT)

I was sadden to read the comment in your blog about traders etc not being able to use the Elsan facility at the recent gathering. I am not aware of any such restriction. Certainly I did see other boaters freely using it outside of "public opening hours" It seems a note had been included in the boaters pack by error. Both LCC and L&H value out visitors and want them all to have a pleasant experience. We jointly apologise for that error in the pack, please be assured that the error will not be repeated in the future.

David - thanks for picking this up, much appreciated. I will pass this on to the other traders.
Thanks for averything which went onto the 2017 gathering.
Andy