Our third and final session on the Tidal Tent was the 13 miles from Torksey to Cromwell, the first lock on the River Trent. Before we left our friends on Nauti-cal emerged round the corner and finally, after years of following each others blogs, we met. I love these surprises boating throws up. 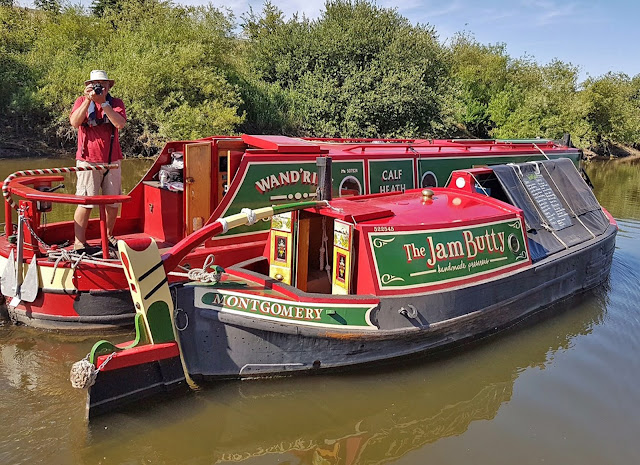 A picture of me! 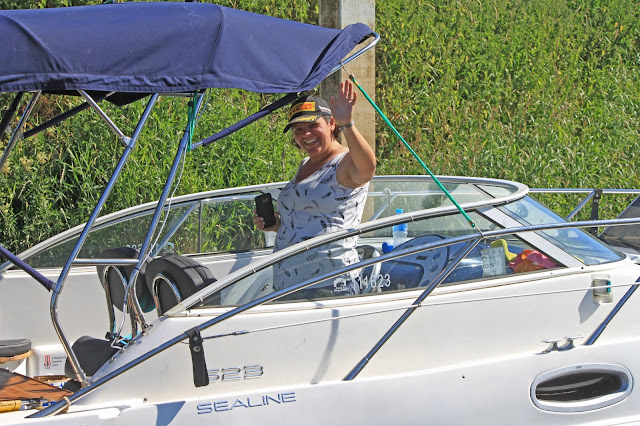 Without wishing to be blase about this last tidal section, we have tackled it in all sorts of conditions and it contains little to be concerned about. The tidal range at Torksey was about four feet with two hours of flood and 10 hours of ebb, twice a day. We are now about 30 miles upriver from the sea and there simply isn't the same volume of water to swill too and fro and whilst we to sear our life jackets on all tidal waters, this is the stretch where I am not entirely convinced they are necessary. 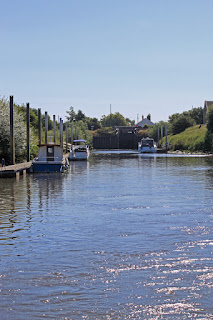 The winding channel isn't terribly attractive and so I found myself obsessing about spotting the moment the time the tide changes. We set out just before ten and the last dregs of the ebb tide came to a standstill and we were immediately pushed ahead by the flood tide. Because of the hydraulics, this time lags way behind the tide at Hull, which all the calculations are based on. 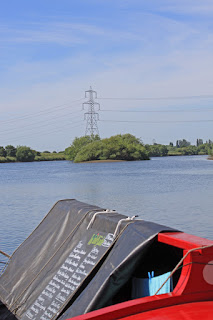 To put the tidal assist in perspective, our normal speed on still flat water is 3.0 mph and instead we were being pushed up the river at 3.7mph. Our expectation was that the assist would last for about 1.5 hours and could therefore be expected to run out somewhere near Dunham Bridge. Dunham came and went and we still clocked 3.7 and much to our surprise it continued to help us for another 2.5 miles to High Marnam Water Ski club. Then our progress slowed to 3.00pm and we waited for the negative drag of the ebb. 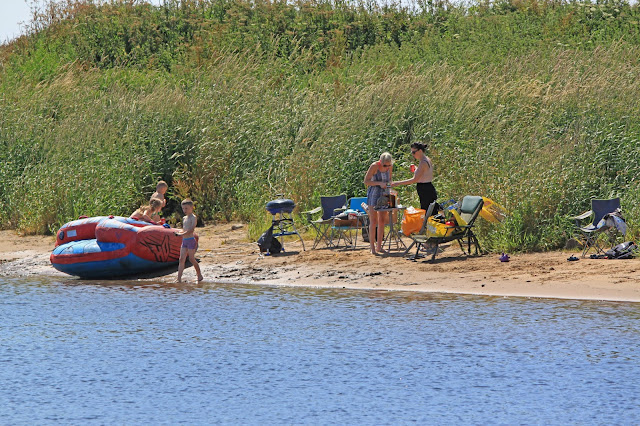 Lower down the river the switch from flood to ebb happens very quickly but instead we had still water for another five miles. Then suddenly, as we passed Carlton Wharf we slowed and the gps clicked down and down till, as we rounded the sharp bends, we struggled to maintain a speed which starts with a 2.   At this point we were just three miles short of Cromwell but given our laboured progress, this took us well over an hour during which time we were overtaken by another two narrowboats. 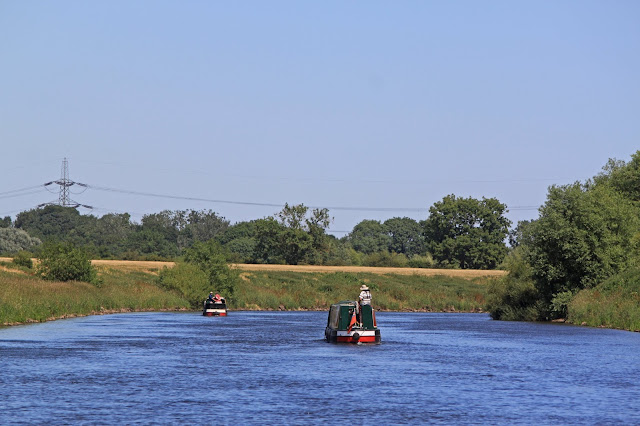 There was no sense of danger on this upper section, but we had to accept slow progress. All we can do is to set the throttle and make the best progress through the water that we can. How long it takes to cover the ground is just a matter of time. 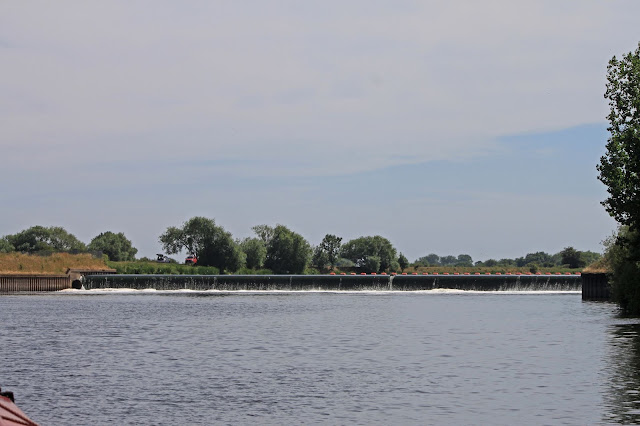 Finally, at 3.00pm, after five hours on the  river, the long silver thread of the Cromwell Weir came into view, with the stark concrete chamber of the Cromwell Lock sitting to the right. The green light was on and in we went, joining the other two boats who had probably been waiting for 30 mins. 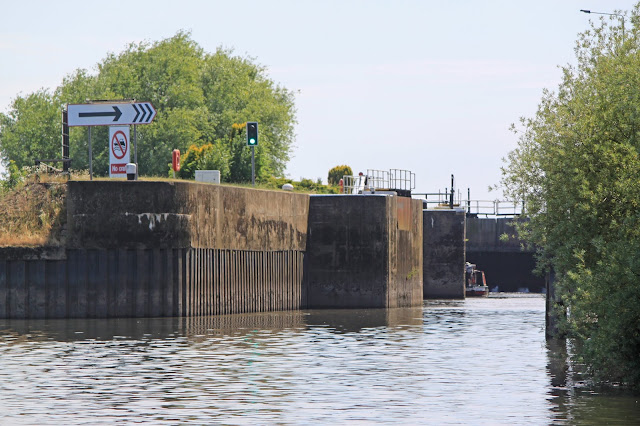 We carried on to Newark another 5 miles up the river. Even after all this dry weather the flow on the river is steady at just over half a mile an hour so we plodded on through Nether Lock, eventually stopping on the east bank just opposite the visitor mooring pontoons. A word of caution - there are two taps on the pontoon but there is no dedicated service mooring. This means you may have to come alongside another boat and carry your hose over their boat. I did  later question this situation with the lock keeper and was assured  that is was perfectly acceptable to insist that this approach is practiced by anyone who moors there. Personally I would prefer to see one dedicated water point mooring. 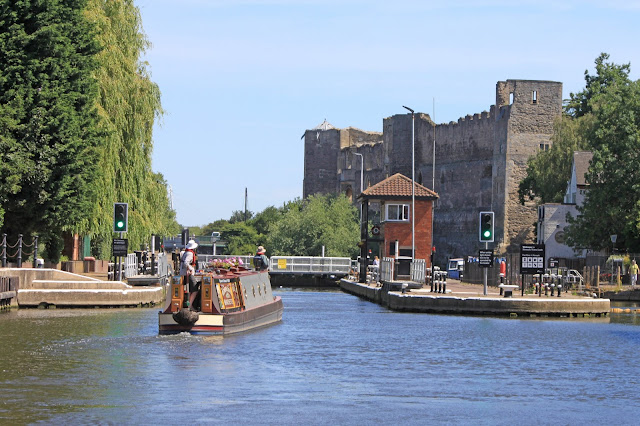 After a quiet night on the off side at Newark we restocked at Morrisons and headed off again up river. As we exited Town Lock a boat was waiting to enter. Sad man that I am, even at 400 yards and head on, I recognised it as Mike and Becky, fellow BCNS members, fellow preserve makers, fellow photography enthusiasts and at one stage Mike and I even shared an employer!. 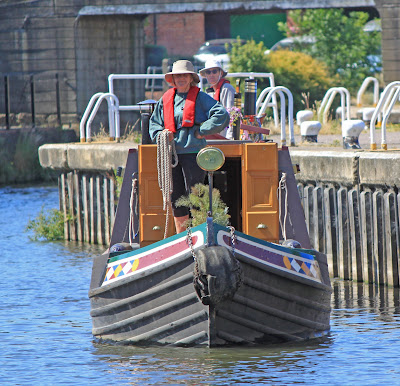 Another fleeting meeting over we settled in for a long slow slog to Gunthorpe. Being Monday it was wash day so as I plodded on at 2.5mph Helen did the washing. It was another day of wall to wall sunshine with a strong wind which dried the washing on the lines in the butty in just a few hours.

There is nothing wrong with the scenery upstream of Newark, but its long open corners do encourage the onset of boredom. To counter this I plug in my i-pod and worked my way through a couple of Beatles albums followed by a few episodes of Desert Island Discs podcasts. I hope my harmonies with John and Paul didn't trouble the fishermen too much.

Hazelhurst lock came into view, and then two hours later, Gunthorpe - our destination for the day.  The CRT services are a bit basic with a portaloo serving as an Elsan and no bins, but we did get water and a mooring for the night, ready for an early start for Nottingham.

135 miles from Torksey to Cromwell?!! Which way did you go - out to sea and back up the Thames and GU? LOL

Would you not make better progress by towing the butty on cross straps, especially on the wide river & with a short Butty no need for a steerer ?

Alf - thats a fair question. We spend all our times on cross straps (well, crossish) on the canals but on the rivers we tend to go side by side for safety. The butty is very heavy and having it swing around with all those flimsy plastics around is a but hairy. Also, the lock keepers wand the boat well secured in the locks and breasted they make a much more controllable unit.