Moving up the Trent and Soar

Trent and Soar to Loughborough
July 2018

Its been a week since I offered an update, an omission which is due to the fact that we have been pressing on upstream for days and days, first the Trent and then The Soar. All this moving in the heat has been knackering and left little time, or inclination, for blogging. 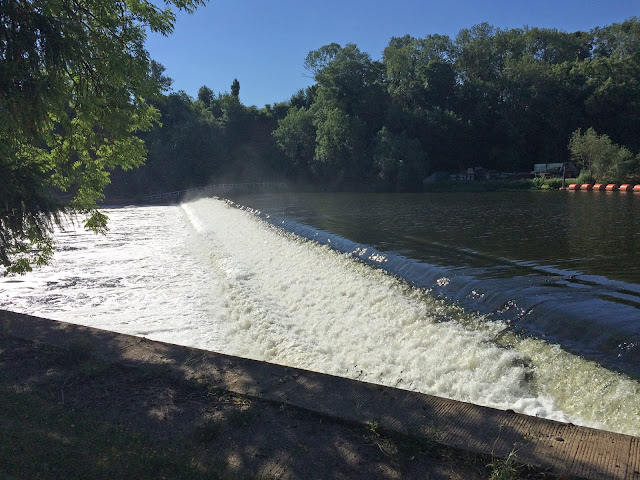 Tuesday saw us complete the trip into Nottingham, passing Stoke Lock and Holmes Lock before turning off the river into the Nottingham Canal. We moored in some shade near Sainsburys and settled down to watch the England Columbia football match with Helen's sister and niece. 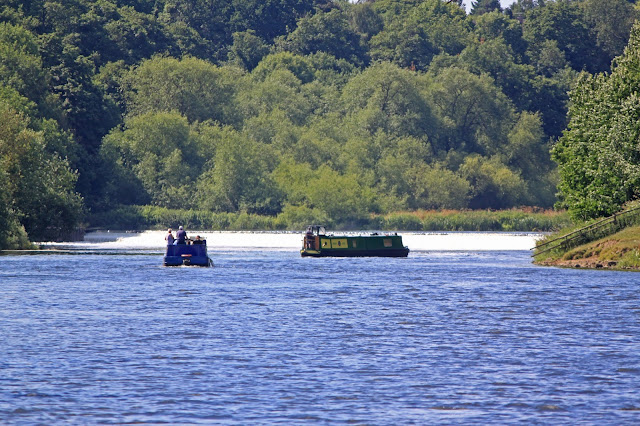 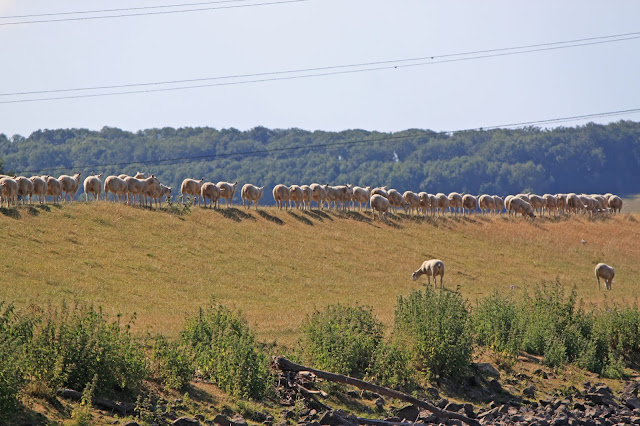 Thin picking for sheep on the dried out flood banks


During the first half there was a knocking on the boat which turned out to be canoeists wanting to buy jam and then the boat behind us wanted some. Fortunately these transactions didn't mean I missed any of the goals! As I took £20 in the process I guess you could say I made a score! 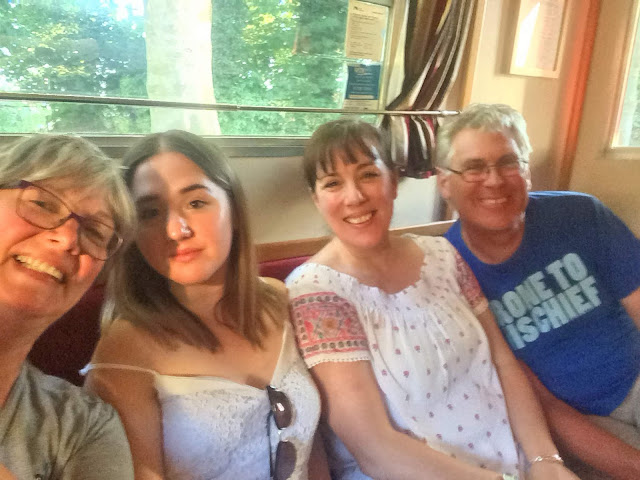 We started with a rendition of England 2 Columbia 0 - in fact it went to penalties but we won!


Wednesday was another relatively short day which saw us leave the Nottingham Canal at Beeston where CRT reps bought more preserves along with an impassioned attempt to recruit me into the CRT Friends scheme. Now, a few words on Friends. I am fully supportive of the Friends initiative, bringing both commitment and cash to the Trust, but its promotion frustrates me. Here we are with 30,000 licence paying boaters, all of who could be advocates of the scheme but who typically already pay the trust £800 a year. In my opinion every licence payer should be made a Friend free of charge and encouraged to go out and sing the schemes praises to those they come into contact with as they travel. But the snag is that you wont sell something you havn't already sampled and the consensus is that "after paying £800 a year there is no way I am paying out another monthly sum". I fear the Trust is missing a trick here but my oft repeated suggestion appears to miss the mark. 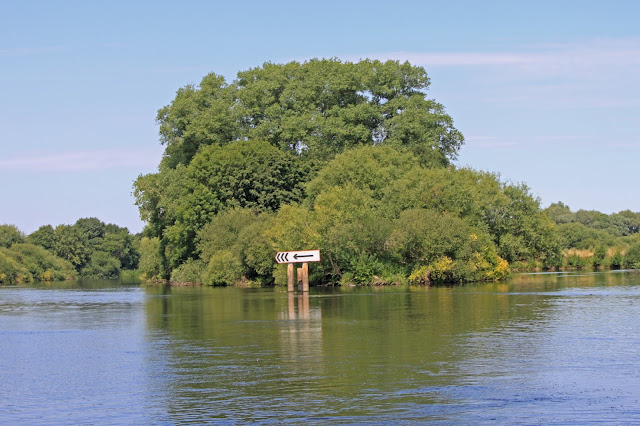 Swallows and Amazons island on the River Trent

Then it was back onto the river, passing a Scouting island which always reminds me of the onedescribed in Swallows and Amazons.The lack of rain means that river water levels were not only low in the green but were at least a foot below the bottom of the green marker. This lack of water meant that the flow of water below Cranfleet Lock was swift over the shallow shoals and the passage of the deep drafted butty pulled up great clouds of silt.. 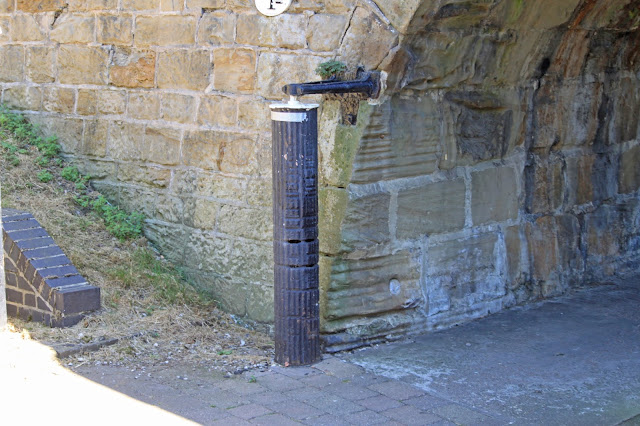 We moored on the river near Trent Lock where the plan was to see Suzie, Jack and the grand children. In the event Helen damaged her Achilles tendon as we erected the gazebo to offer some shade. This mishap resulted on a trip to A&E and the subsequent programme of rest and ice presented some challenge in the coming days. 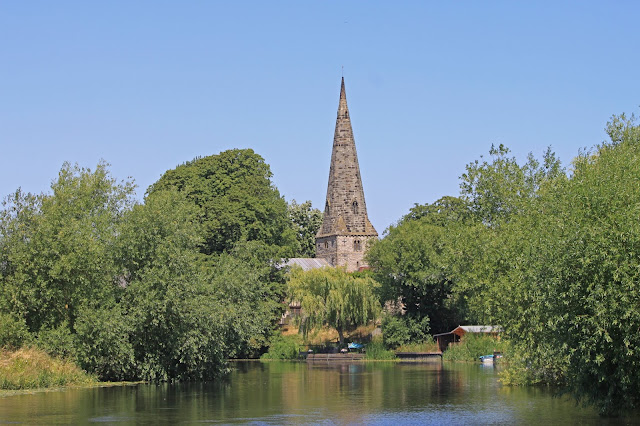 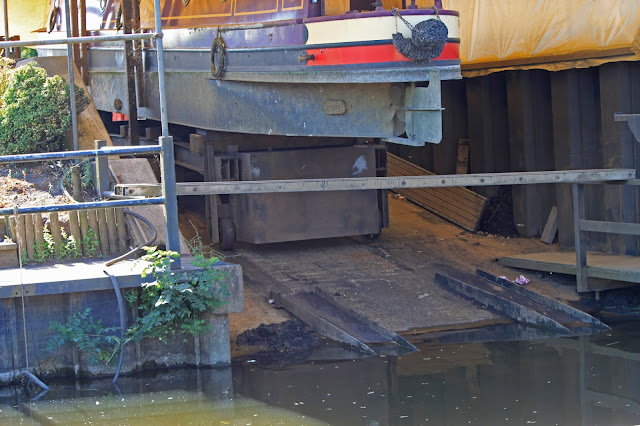 
Thursday was spent negotiating the lower reaches of the River Soar, pushing the breasted pair up the river to Loughborough. We called into the basin to use the services but the place was  sun trap and we were pleased to leave it behind and moved on up the canal section to a shady spot just below Loughborough flood gates and a return to the river.
Posted by Andy Tidy at 9:55 am