To Welford the long way

Sorry about the pause on blogging, we have either been either a bit busy or the heat has made the idea of cradling a warm laptop rather unappealing. In fact it was only yesterday as we were hiding in the shade at Cosgrove that I heard a passing boater mention to his partner that, as far as he was aware from the blog, we were still near Debdale Wharf. The hot weather doesn't look like it is going anywhere fast so I am now sat under a tree somewhere in Milton Keynes playing catch up. Here goes. 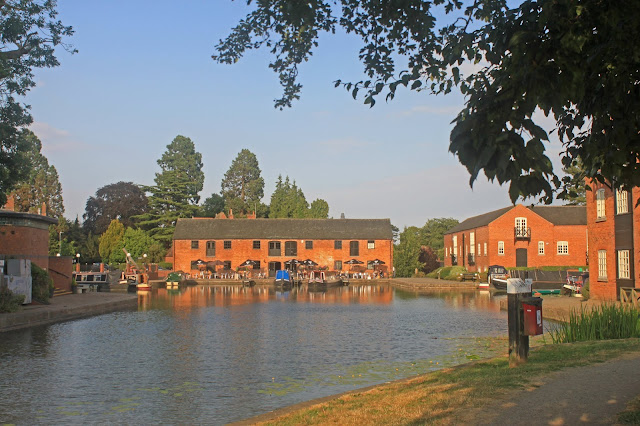 As in previous years we have hired a van about now and returned home to do all the domestic stuff but also to have a big blast at making our years supply of various variations of strawberry jam. That, and having an opportunity to recover the other half of our stock ready for the main festival season.

In the past we have used Milton Keynes Enterprise who will collect us from Cosgrove, but this year's schedule dictated something a bit earlier so we opted for a lay over at Market Harborough and a van from Leicester. Not ideal, but a safe place for the boats and a direct train line back to the city. As we were returning with Dan we opted for a larger transit sized vehicle which, with its turbo diesel engine had a good turn of speed but was rather noisy. 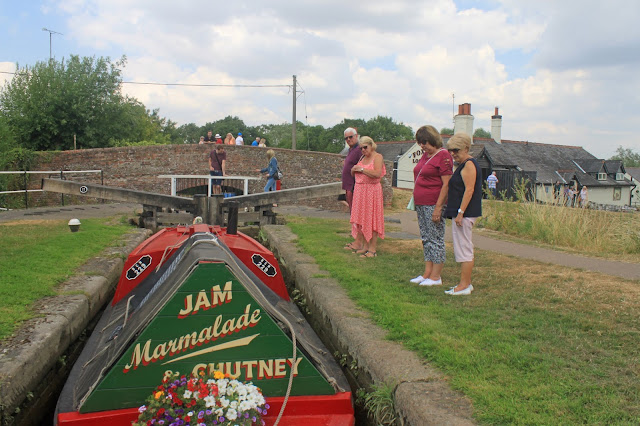 Attracting a crowd at Foxton

There are no long term visitor moorings near the basin so we moored the boats a few hundred yards back up the arm, adjacent to a gulley (other local variants are acceptable) which let us park up just a few yards away in Logans Crescent.

Home turned out to be anything but restful. We bought a huge volume of jamming strawberries from the farm shop in Hints and set to work. In the end we made over 250 jars, and watched England go out of the 2018 World Cup. 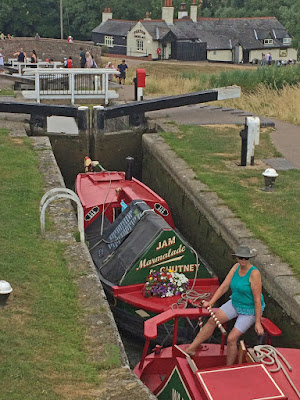 The concept of a three seater van was better in theory than in practice. As Dan has the shortest legs he was allocated the middle seat. Width wise we were OK but the gap to the dash board was smaller than RyanAir. Dan suffered a rather cramped journey and was unfolded at Market Bosworth. Reloading the butty is no small matter. The organisation of the preserves has more than a passing resemblance to an Ikea warehouse. Every possible storage location is numbered and marked on a "map" on the wall. Then as each variety is stored away its location is noted in the master book for easy reference later on. This is all great, but you do have to be accurate or you have absolutely no idea where anything is. All in all it took two hours under a cloudless sky to get the job done, followed by a drive back to Leicester and then the train and a walk to get back.

After a night to recover we were off,  with an initial objective of mooring above the Foxton Locks. We rocked up to the bottom lock and could see boats descending so knew we needed to see the lock keeper - the problem is that the trip boat occupies the obvious lock landing and with the butty behind us we couldn't get back to the on to the north of it. In the end we just sort of hung around below the lock and figured the lock keeper would find us - which he did. 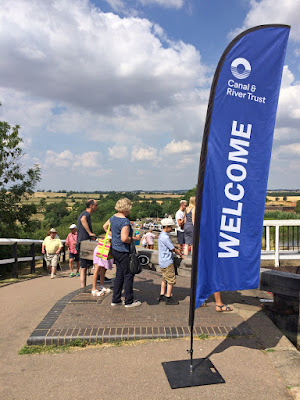 We zipped up the locks, aided by two lock keepers and followed by a huge crowd of gongoozlers, some of whom bought preserves as we rose. We had planned to moor and trade at the top of the locks but it was another blistering hot day and the lure of shade was greater than a few sales. We moved on and found a shady spot where we settled down for the night near bride 59.

Sunday's agenda was to make the short trip to the Welford Arm and watch the world cup final between France ant Coatia. This involved a passage through the Husbands Bosworth Tunnel and then on to the Welford Junction. This little arm is both narrow and shallow but given the remoteness of the canal in this area it offers on the the few opportunities to touch base with civilisation, and is therefore very popular. The end moorings were in full sun so we winded and returned to a tree lined section, just above the arm's single little lock. The internet signal was a bit iffy but the we were able to watch the match by putting Helen's phone in a trainer tied to the roof !