The drive to reach Debdale

I booked a rental van today and was asked my location. A simple question but one which is always a bit difficult to answer when out boating. There is the place we are now, the place where we expect to be at a point in time and of course our home address.  I decided to start with our "now" address and said Loughborough. At the end of the discussion the location was repeated back to me and some garbled translation emerged which sounded nothing like Loughborough (clearly not a local). The problem is that I cant see the place written down without hearing the antipodean version in my head "LoogieBarruga". This particular little earworm is, of course, entirely due to a weekend we spent in the area with Sandra and Barry. 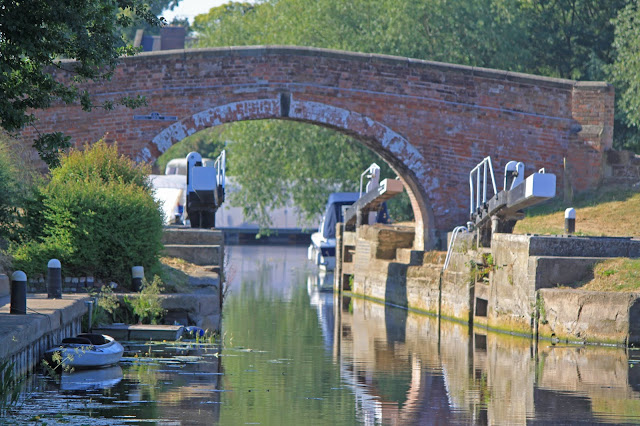 Anyway. With all this hot weather we decided to implement the "River Wey" strategy which essentially means starting off in the clool at 6.30am and then holing up under a tree from 11.00am and moving on again after 6.00pm when things have cooled down a bit. Well, we got the start right but the rest didn't go according to plan. We were off through the the Loughborough flood gates with the sun low on the eastern horizon, the misty River Soar winding its was south. All very idyllic. 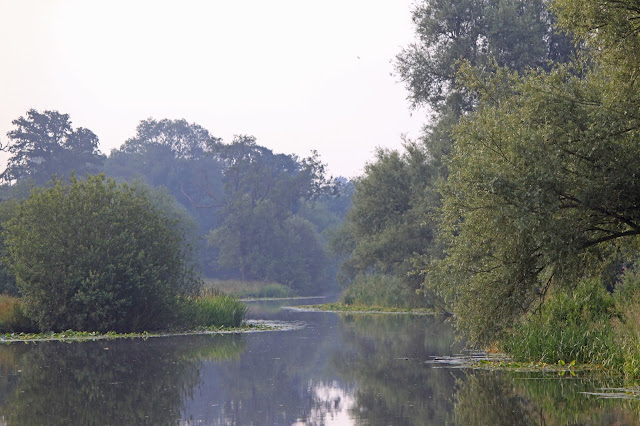 Somewhere along the way, and I have lost the exact location in a heat haze, we passed a short ice breaker moored on the off side with an elderly couple standing in the hatches. I was interested in their boat because it clearly had some history, but before I had an opportunity to ask about it they told me that they had the cabin section of The Jam Butty built to tow behind the boat they were standing on. For years I have offered the story of how the original version of the butty was 30ft long and was built to trail behind a short ice breaker tug and now I have found it. I love these little chance meetings where bits of a jigsaw come together. 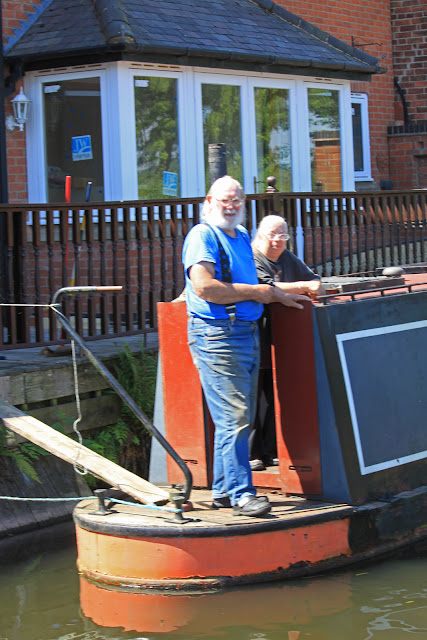 The builders of the back section of The Jam Butty

We met some contractors our spraying Floating Pennywort at Cossington Lock and were so engrossed in our discussion about the week we completely missed the turn left sign. Instead we plodded up the attractive river in front of us till a warning shout from a moored boat alerted us to our error. "The last chap to make that mistake took two days to get out again!" We turned and retraced our steps with more than a bit of embarrassment. 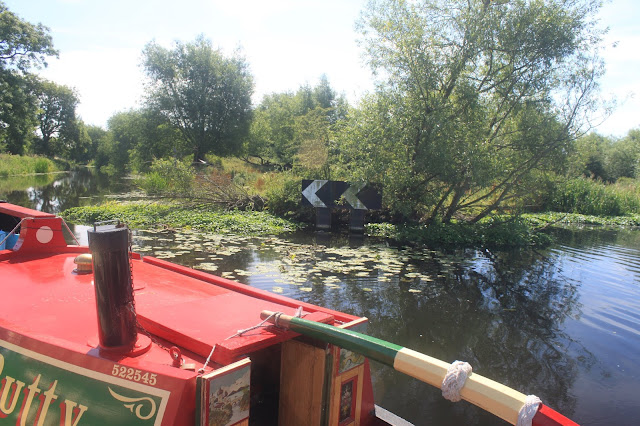 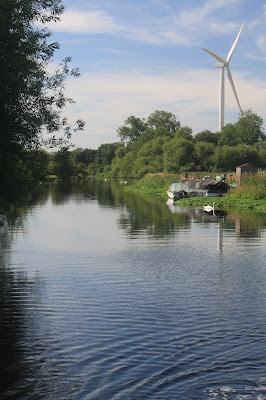 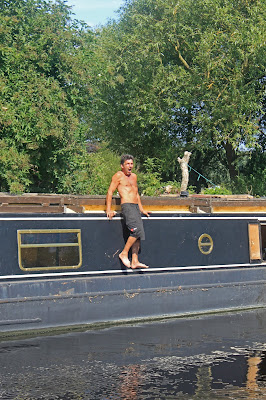 Our objective was to reach Leicester but in the event we entered the straight mile and found the visitor moorings both full and basting in full sun. The shady alternatives were on the west bank but these were adjacent to seats surrounded by bottles and debris - not an inviting spot for a hot Friday night.

Our enthusiasm for Leicester was not high in the first place and was not encouraged by a bunch of teenage boys swimming in a lock as we tried to empty it. They have no sense of the dangers involved and perhaps the most horrible thing was watching two dead rats bobble out from between our boats as we emerged from the lock. Yuck, yuck, yuck.

You may have noticed that I bough a Tilley hat in Saltaire and one of its selling points was that they float. Coming through Leicester I was hit by an unexpected gust of wind and off it went into the canal behind us. With the hat safely recovered, and rinsed, I can confirm that they do indeed float. 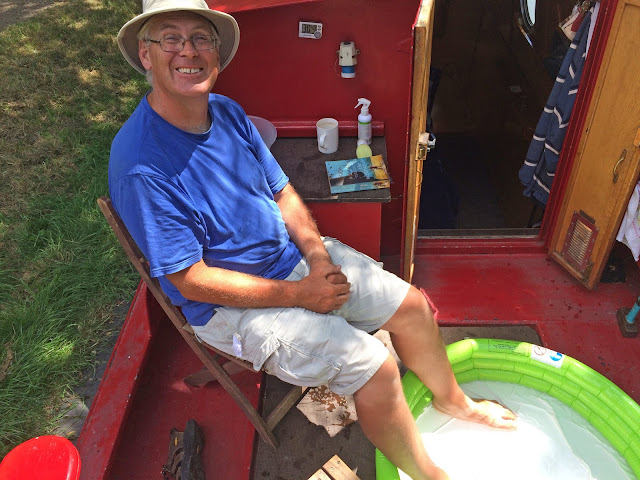 How to end a hot day (grandchildren's forgiveness sought)

So we pressed on upstream passing through another half a dozen locks stopping as the river section ended at Kings Lock at 5.00pm. With the waterway narrowing dramatically it was time to drop the butty into its astern position, the first time it has not been beside us since Skipton about three weeks ago. It may have been a long day but we covered 19 miles and 13 locks which is pretty much two days of normal travel. This puts us well ahead of schedule and means we can have a few shorter days.

Saturday dawned clear and bright (again) so we made a start on the Grand Union Leicester Section of canal. The canal is technically broad (14ft wide locks) but the channel is only really wide enough fro narrow boats (7ft) and many of the pounds between the locks were 12 to 18 inched lower than normal. We therefore inched from lock to lock eventually covering just six miles and nine locks to reach a bit of shade at Kilby. We stopped at 2.30pm, with just enough time to set up the TV and watch England play Sweeden which was a 2 - 0 win - but we lost signal 2 mins from the extra time and had to resort to old fashioned texts to our Dan to confirm the final score.

The evening was spent chatting to other boaters who, inevitably, came to look at the butty and stock up on preserves. All this passive selling has been constant this season which is very gratifying.

Sunday and another day of intense sun. There was no church within 1.5 miles of our mooring and Helen's ankle wont carry her that far yet, so we were up at 6am with the aim of finishing the last 12 wide locks on the ascent to Market Harborough. We managed this in the relative cool of early morning, passing a large group of Galmping adults using Gas Pipe Lock as their personal swimming pool. They were little better than the kids in Leicester as one still dived in after I had raised the paddles to empty it! He didnt like being told to stay out.... I did observe that I had pushed past the bloated carcass of a dead sheep two locks down and no doubt there were others further up, and then went on to mention the symptoms of Weil's Disease. The "leader" said the risk of Weil's was overstated and he swam in the canal all the time and that he was a live aboard boater - as if that makes a difference! He clearly hadn't warned or informed his  friends didn't because they blanched at the talk of dead bodies, rats pee and diseases. I don't know if we had any impact but if they do have any symptoms later on they may just seek help.

The plan was to stop in shade as soon after the top lock as possible but could I find any? Could I like heck. The canal margins were all reeds and where there was a firm edge there was no shade. And so we drifted on, and on. We went through the Saddington Tunnel which offered some welcome shade but beyond the towpath switched sides and shade was elusive as ever. In the end we continued to Debdale Wharf, a location which was the end of the canal for several years when the builders ran out of money. Then, just before the winding hole the trees arched over the water from both side and we had found a mooring with shade and even a hint of breeze.

We set of the paddling pool on the back deck and put in a couple of gallons of cold water which was used to cool some hot feet and provide a fit of respite from the heat. It may look daft but it felt great.

Your journeys are quite adventurous at the moment! Splendid fun!

Just to clarify, it's Loo-ga-ba-rooga - and it's the Australians we were told who nicknamed it such. Sounds logical to us ;-)