Our ambitions on leaving Aylesbury Basin were not exactly taxing.

Shop at Waitrose, use the service block and find some shade. 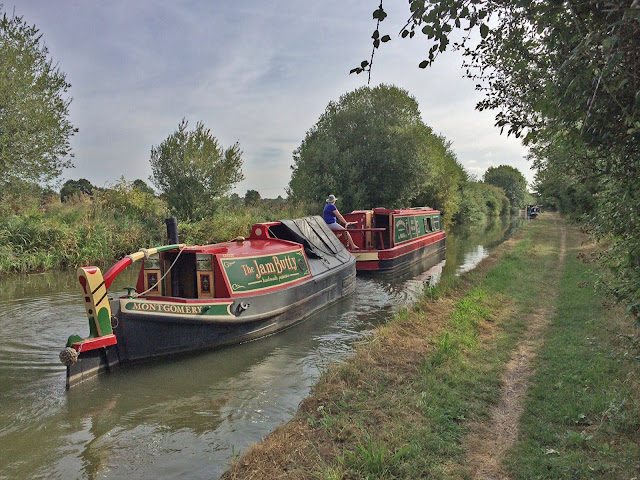 On my way down I had been keeping an eye out for shady mooring options and had sussed out a possible spot just above Lock 14 (Broughton). We arrived, already having worked up a bit of a sweat and just as I was moving in I saw a swarm of wasps buzzing in and out of a nest, bang in the middle of the shade. That was a non starter.

We swung out into the canal again and I decided to return to the mooring by Bridge 12 which I had used a couple of days ago. It is in dappled shade rather than deep shade, but at least I knew there were no wasps. Fifteen minutes cruising and we were there, so I swung in to get the motor in the best of the shade and the butty came into the reeds behind me. I tied up and then as I secured the butty I found its middle section enveloped in a cloud if wasps - another nest! No way was I going to be driven off by a hoard of Satans spawn, so I recovered my big pot of ant and wasp killer which we have in hand for just such an occasion. The weeds were raked away exposing the entrance and poof, one big cloud of dust later and the nest was done for. I watched for a while and after an hour or so the number dropped off and just the odd straggler hovered about for a bit, and then drifted off. We didn't see a single wasp in the motor all day. Nippon is good stuff. 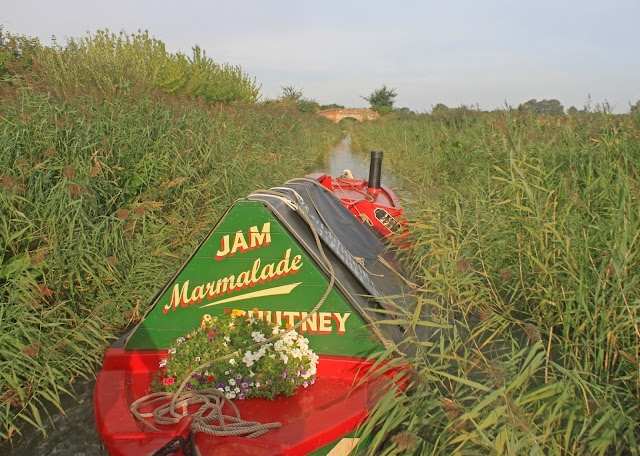 Its a bit narrow here and there!

We hid away in the shade all day, Helen doing crafty stuff and I caught up with the blog. The canal was as quiet as a grave and we saw no boats till two passed us in the cool of the evening.

With a heat wave settled in we have switched to "Wey mode" which means getting up at 6.00am and moving till maybe 10.30am when it starts to get really hot. Then find a big tree and moor there either all day or move again after 18.00.

We were up and away before 7.00 am but much to my irritation the top gate of the first lock was left open and the paddles left up. This is a pet irritation of mine and I gritted my teeth and had to do double the work. It was particularly galling as I knew exactly which boat had gone up last the night before. 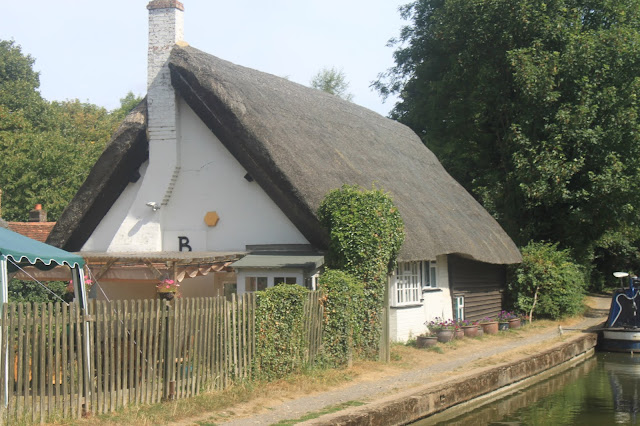 True to form, I found the same at subsequent locks, even those which quite clearly stated the chambers were to be left empty and paddles up. As it happens I saw the "offender" setting off from the Wilstone moorings into lock 8. He must have seen us at he lock below  but he still left the lock with top gate open and paddles up. Grr, This really hacked me off so I legged it up to the next lock to remonstrate. I got a " It wasn't me lower down" and "the bloke by the last lock told me to leave them up". I accepted his excuses for what they were but was delighted to see him moor (using a lock landing bollard, but what else would you expect).

We emerged at Masworth Junction by 11.00am and after a quick stop at the services we found a shady mooring in the same pound and went to ground for the day. Working in the heat means the use of a massive number of tee shirts, so we had an impromptu wash day and got everything clean. At least we can be assured of a good dry.

There is no hurry as its two weeks before we need to be at Blisworth, so ne need to make a move in the evening.
Posted by Andy Tidy at 9:00 am