Its odd how sometimes you can just see trouble coming your way. 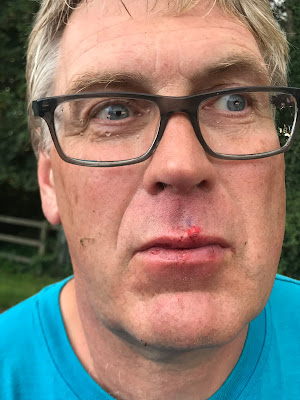 For all those of you who expressed their shock and sympathy on Facebook, here is a fuller explanation of events.

We have taken a leisurely week long trip up the Shropshire Union on a forging expedition (damsons and apples) between Alvecote and the Black Country Boating Festival and on Saturday reached the end of the trip in Market Drayton, winding, watering, using the elsan and had planned to take advantage of then supermarket to restock the depleted larder.

I moored on the first visitor mooring on the embankment immediately south of Talbot Wharf and was engaged in a spot of blackberry picking by the school fields when two teenage boys (15 ish) came walking towards he canal dressed in the obligatory grey trackies and hoodies and I was immediately a bit wary. They settled themselves onto the bench with a couple of mates, which was next to the butty, and were immediately rowdy. Helen was on the motor so I edged closer to keep an eye on things. I wasn't happy with the group so  I decamped to the back cabin of the motor where I could maintain a discrete watch. 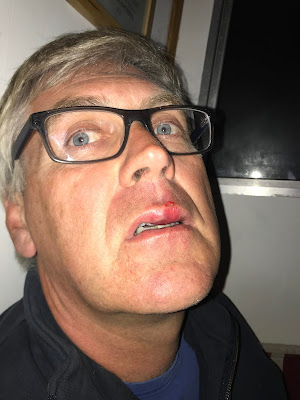 It wasn't many minutes before there was an almighty bang and something (probably a bottle) slammed into the butty. I glanced up and he bang was immediately followed by one boys jumping onto the roof and another preparing to get in through the back hatch.

Whats one to do? Well, me being me jumped out to challenge them, but in my haste didn't put any shoes on - and therein lay the seeds of my downfall.

The one of the roof hopped off fast, but the smaller one decided to taunt me from his position on the stern. I ordered him off with the customary threat of a dunking in the cut and ended up dragging him off by his hoodie. This phase of the process was successful but sadly I took my eye off the other one who managed to swing a punch into my mouth.

With no shoes on my grip was poor and as I continued to swing the kid round and off the boat he dropped to the floor and I overbalanced right into the canal!  Yoof number two (the puncher) then thought i would be a good idea to push me back in as I got out but I pointed out that if he came within my reach he would be "in the bloody cut with me". He backed off.

Meanwhile the little git I had slung off the boat stood there with a torn hoodie realised that in the struggle his shoulder bag, which presumably contained his phone, had ended up in the water which was satisfyingly waterlogged.

I hopped out with an aim of protecting Helen and the boats (in that order) and my objective was then to drive them away rather inflict vigilante style retribution. So dripping wet I walked at them and they promptly withdrew towards town. I followed, barefoot, for a few hundred yards till I was sure they were away and I then splodged back to the boat, retrieving my phone for a 999 call to report the assault ,and explain my dishevelled state to a disbelieving Helen. She had been on the phone a mere 70 feet away and had heard absolutely nothing.

Given that it was attempted burglary and assault I was rather surprised that the Police didn't dispatch a car whilst the offenders could have been apprehended (its a 10 min walk back to town) and instead logged it and I had a call back from the local force the next day when they apologised that the 999 call didn't trigger the dispatch of a car. At least they know there is a problem in the area.

I have since spoken to other local boaters who know of at least four similar incidents in the recent past, so Market Drayton is clearly currently a flashpoint and a place where you need to be vigilant.

My take away thoughts are, wherever possible, not to moor close to seats beside the canals. These are places where kids congregate and they are likely to focus on whatever is close by. Had I selected a mooring 400 yards up the towpath I would probably never have had the trouble. Some suggest that a weapon such a a mooring spike or windlass would have had an impact, but in the same way I am sure that little will come of my report to the police, had I wielded a heavy weapon at them I would have been the one prosecuted for assault.

So, in the end I did protect the boats and their contents, I did manage to drive them off, one sustained a torn top and probably a wrecked phone but for my part I took a thick lip and a dunking. The dunking was probably a blessing in disguise because it cooled a growing rage and prevented me escalating an altercation beyond what was considered reasonable force.

So, take care in Market Drayton at the moment. This was mostly a case of being in the wrong place at the wrong time but local info suggests its my no means an isolated incident.

We decided that discretion was the better part of valour, so quietly slipped away and spent the night the other side of the Tyrely Locks, well away from any possible overnight reprisals where we would have been sitting ducks. Such it the power of the internet / boating grapevine that as we travelled south to Gnosall on Sunday, heads kept popping out of moored boats asking if my lip was ok!

But of all the lessons one could learn from this incident is - if you decide to tackle rampaging teenagers, remember to put your shoes on first!

My lips are healing well and it will take more than a couple of louts to dampen my enthusiasm for canals or boating. It's just not what one would expect in sleepy Shropshire.

To all of you who sent me your best wishes of Facebook - Thanks. The pain in my lips was more than balanced by the outpouring of love and compassion you all expressed.

Good God, Andy, that could have ended badly. And the Police not attending, well that is totally unacceptable especially as it was assault! I hope you made a complaint! We are always very wary of youths milling around and avoid them, if possible, at all cost. Glad you are okay though and we send you both our best wishes. Xx

I might be of value to post details of this altercation to the Town Council at Market Drayton maybe they can influence the Police ‘Service’ to do better.

Ouch indeed, so sorry to learn of your injuries, hope you feel better soon :)

Eek. We've been moored in Market Drayton for years now and have not seen any trouble. In fact generally I'd say the town feels less threatening than it did a few years ago.

Will keep our eyes open, but do hope this doesn't put others off visiting what is generally a nice and friendly place.

Yep I heard from ab Australian couple that they had an unsavoury incident in MD in August. An Approx 16 year old( with two girls in tow) climbed onto front boat and took a deck chair. When challenged verbals and punches. Police not interested .There is a problem here at present.

What a shocking tale, Andy. I am glad you are okay. Certainly an area to be vigilant in. Jennie nb Tentatrice

Thanks for all your words of concern. Lips heal and it takes more than this to put me off!