It poured during the night and the quiet was shattered at 8.00 am when the adjoining breakers yard got to work. The rain had added to the flow which is strong in the Newark cut, probably 3 mph. We went upstream to town bridge to give ourselves lots of leeway during the turn. All went well and we left the other boats sleeping on the pontoon. We were at Nether Lock by 9.10am as planned, accompanied by a novice in a plastic cruiser. He said he was planning to live on it but with no heat, frozen water and a dead bonsai I cant see this plan lasting too long.
We hung around under the bridge above the lock till 9.30, but the lights remained stubbornly red and there was no sign of the Locky anywhere. In the end I figured that the controls couldn’t be too difficult and operated the boaters controls, locking both boats down under the watchful eye of the tenants of the adjoining cottage. The controls were simplicity themselves but the chamber, gates and sluices were huge – a far cry from the narrow locks of the Midlands. The plastic boat zoomed off and Jeff made a very skillful exit, picking me up on the jetty opposite the weir at about 10.00am. We arrived at Cromwell at 10.45 am, a bit behind schedule but this want a problem. The Cromwell Locky said that the man responsible for Nether Lock was off work so we could have waited for ever. We penned out at 11.00 am decked out in buoyancy aids with navigation lights deployed only to find… a stretch of river that looked just like the section above the lock. Never the less, there was now no barrier between us and the North Sea, just 60 miles of tideway. 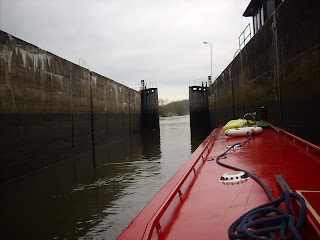 The Locky waved us off suggested that with 2 ft of fresh on an ebb tide we would be at Torksey at 2.00pm and Lincoln at 5.00 pm. He was right to within 10 mins on both counts!

This section of the Trent is as barren and bleak as it is bold. Sure it gets bigger and bigger but given its tendency to flood, the villages keep their distance and the river meanders its way across a massive flood plain, rarely reaching the low hills that border it. Landmarks consist of a few bridges and power stations with their massive cooling towers supported on a lattice of improbably spindly diagonal legs. High Marnham is clearly decommissioned with the turbine hall and boiler rooms gone leaving a cluster of cooling towers presumably waiting for the inevitable return Old King Coal as the saviour of the British power needs. We pushed on and on down the endless Dunham Rack, a very dismal place on a cold and rainy day in March. The idea of water skiing these reaches failed to appeal.
Jeff was looking forward to Normanton Sunken Islands but these were a big anticlimax given their very sunken status at the time. Finally, in a flurry of hail, we turned into Torksey Cut with its green light welcoming us into the lock chamber. 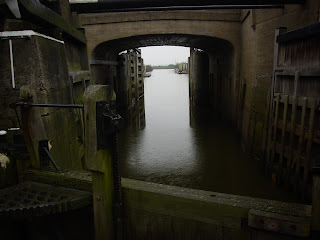 At last, the locks were back to the 70ft x 14ft dimensions of a broad canal and the Locky was really helpful. When he learned we were going all the way to Boston he dived into his office and produced several pages of tips and information. Most usefully, he explained the vagaries of the water levels on the Witham which can vary by four feet from day to day as water is sluiced out to make space for run off from the fields. With rain forecast this explanation proved invaluable. 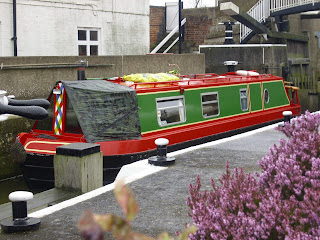 He had only seen two boats that day so our passage through Torksey was a welcome diversion from his maintenance duties. He was the relief Lock Keeper and lived on the narrowboat next to the lock. He mentioned that was expecting the plastic cruiser - had we seen it? He must have been referring to the boater we has seen at Nether and were able to confirm that he was safe and well, tied up on the pontoon at Fledborough. 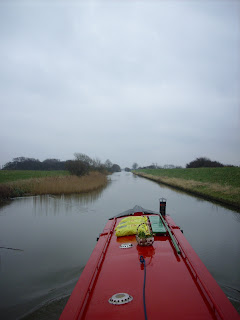 The Fossdyke navigation was originally built by the Romans during the second century (but has been improved since!) and they built their canals just like their roads – broad and straight. It was built to connect York with Lincoln and then provide access to the Wash and its river systems into the East, all using natural tidal flows. It was the first man made waterway of its kind in the UK and therefore a worthy contender as one of the seven wonders of the waterways. The first stretch was 5 miles long without a single kink – impressive if somewhat monotonous. At the end you reach the pretty settlement of Saxilby, a quiet Lincolnshire village with lots of small shops of the type that time has forgotten elsewhere. The Fossdyke goes on and on, broad and deep. Sometimes it is accompanied by the A57 and at others by the Gainsborough Railway. There is a new development just before Lincoln called Burton Waters which includes housing and a marina. The marina relocated from Brayford Pool a couple of years ago and offers the best chance of diesel and a pump-pout in the area. The fuel wasn't cheap (80p per litre) but it was reassuring to be fully prepared for the remoter southern section of this journey. The marina is really aimed as seagoing and riverboats and, whilst they were happy to take my money, I did get the feeling that steel narrowboats like Wand’ring Bark were considered rather second rate.

We entered Lincoln past long lines of houseboats. Being on a broad waterway the types of vessel used were more varies that we are used to - everything from 1950’s lifeboats to a fire damaged three story gin palace. 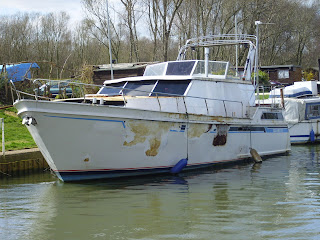 There was a shortage of visitor moorings in Brayford Pool itself so we worked our way alongside the concrete wall of the pool, next to the Harbourmasters office. This area used to contain “sticking out” jetties but these have long since vanished leaving only underwater obstructions and deep mud to trap the unwary. The eastern side of the pool represents Lincoln’s new entertainment area which is lively, but a bit loud. 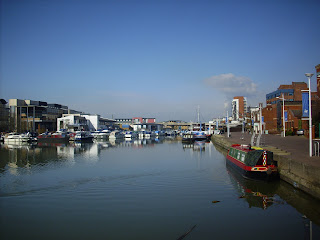 We created a mooring with extensive prop dredging, but wouldn’t recommend the spot. For a great destination the boat moorings are deplorable – but this is set to change when the Brayford Pool Trust finally decides what to do with the place.
After a stroll up Steep Hill, we had a meal at Pizza Express and then watched the film 100,000BC at the local multiplex before returning to the boat. On the way Helen tripped on a low step and fell hard. Not the best end to the day but a sudden downpour washed away the revellers enthusiasm and gave us a quiet night.
Posted by Andy Tidy at 9:51 pm