As there was no particular urgency to get to Boston we spent the morning exploring Lincoln. We visited banks, bookstores, outdoor shops and finally the stunning Cathedral. It’s 20 years since I last visited Lincoln and it was my first time inside the Cathedral. It is a truly awe inspiring place, mostly 700 years old. Generations have applied their creativity and resources to the construction of a building to glorify God. It’s a good job the 2008 earthquake didn’t damage it, the stonework must be very fragile in places. 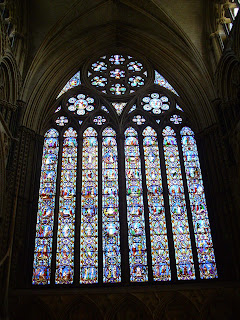 Steep Hill is like a can of Ronseal – it does exactly what it says on the can, but in the case of the street is does take your breath away. As you toil upwards there are a plethora of little shops which provide a good excuse to pause and recover your composure. Jeff was adamant that he didn’t find it steep and insisted on running up and down it just to prove he could.

On our return to Wand’ring Bark we discovered that some light fingered local had helped themselves to the flowers off the roof – the cheek of it. Belle was rather distressed by their absence so we shook the dust of Lincoln off our shoes and, at 1.00pm, we plunged headlong through the Glory Hole. 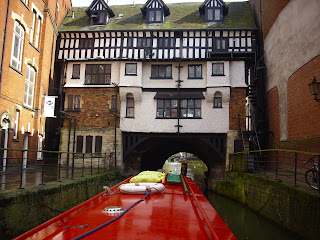 All very pretty followed by an amazing modern sculpture which hangs over the river. I could only surmise that it represented man reaching up to God – but maybe I was still in the spirit of the Cathedral. 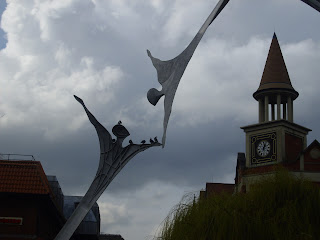 First stop was Stamp Lock with is slow moving (but mechanised) guillotine top gate.
These upper reaches of the canalised Witham have the Cathedral as a backdrop and you can’t help taking a quick peek behind you to see if you can still see it. This can become habit forming and in fact it remains on the horizon all the way to Bardney Lock. 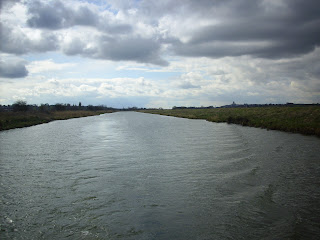 Whilst the river carries the usual flotsam and jetsam of a major town, the channel is deep and wide and good progress is possible. 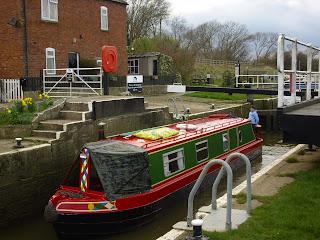 Immediately beyond Bardney we took a sharp left up the Old River Witham, which remains navigable for about a mile to the road bridge. Progress was slow due to a strong current and limited depth. We made it to the bridge and planned to wind at the entrance to the pumping station 400 yards beyond but ground to a halt in a sea of mud just beyond the bridge. The swift flow made turning difficult but we made it and were quickly swept back to the tail of Bardney lock amidst another shower. 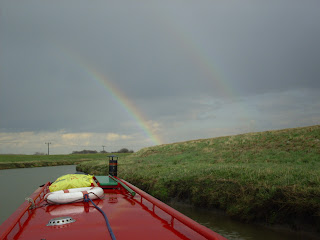 From here on the character of the river changes and assumes the air of a typical fenland drain, with high banks on either side blocking the endless views of flat fields and wide open skies. Judging by the debris on the banks the drain level can rise very high, probably making a level with the reach above the lock. The end of the day settled into a lovely spring evening with a rich sunset and punctuated with occasional aircraft from the RAF base at Conningsby. We had planned to stop at Southrey visitor moorings but they were full of craft laid up for the winter so we pressed on to Kirkstead Bridge and moored on its long floating pontoon which is typical of its type in this area. 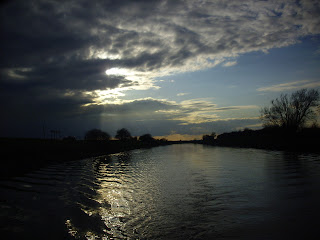 We passed a solitary craft during the afternoon but that is getting to be the norm in this neck of the woods.
Jeff stepped up to the culinary plate and delivered a very respectable Spag Bol before another episode of Life on Mars.
Posted by Andy Tidy at 9:54 pm