Saturday 22 March 2008
Great Haywood to Alrewas Day 2
Trent and Mersey Canal
Miles 14
Locks 12
Hours 5
The forecast was for cold, northerly winds with snow showers later and for once the weatherman was spot on. The strong winds resulted in much crabwise progress down the exposed sections of the T&M but, as we experienced yesterday, we were virtually the only boaters using the canal. Things calmed down as we navigated the sheltered sections through Rugely and Armitage but even around the usually busy usually Kings Bromley Wharf, nothing was moving. 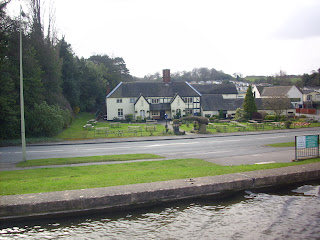 We fairly raced through the Fradley flight but we were accompanied by a gaggle of gongoozlers who tend to congregate around the Swan Inn. 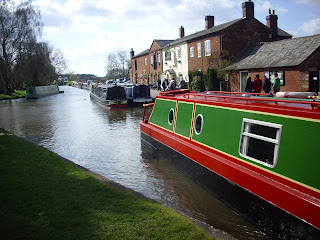 Our ambitions for this day had never been very great and we planned to stop in Alrewas and attend an Easter Morning service in the Parish Church. We reached the village in good time but spend about 30 minutes faffing around when we discovered that there were no spaces on the visitor moorings between the water-point and the lock onto the river section. Our solution was to lock down onto the river, turn by the weir and return to the winding hole north of the church and moor in a space we has spied right beside the church. We had decided to eat out to make up for the non appearance of fish and chips last night and by chance we opted the Crown. The Capt spied a hand written poster advertising a real ale festival which offered about 12 different local ales at £1 per ½ pint. We sampled 3 or 4 and were particularly taken with Old Legover. In the end we signed up for the whole thing including pie and mash at a reasonable £4 a head plus apple pie for pudding. The staff were really welcoming and the event was a great success from our point of view. 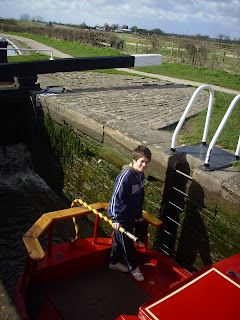 The evening concluded with another 2 episodes of Primeval and sleep to the sound of the Alrewas parish church clock
Posted by Andy Tidy at 10:40 pm